The University of Miami welcomed back 14,920 undergraduate and graduate students to campus this spring, 1,200 more students than the previous semester.

The University of Miami provided a statement regarding the influx of students: “Given our successful completion of the fall 2020 semester and a greater understanding of how to adapt and respond to the challenges of COVID-19, we anticipated that more students would feel comfortable returning to campus for the spring 2021 semester.” 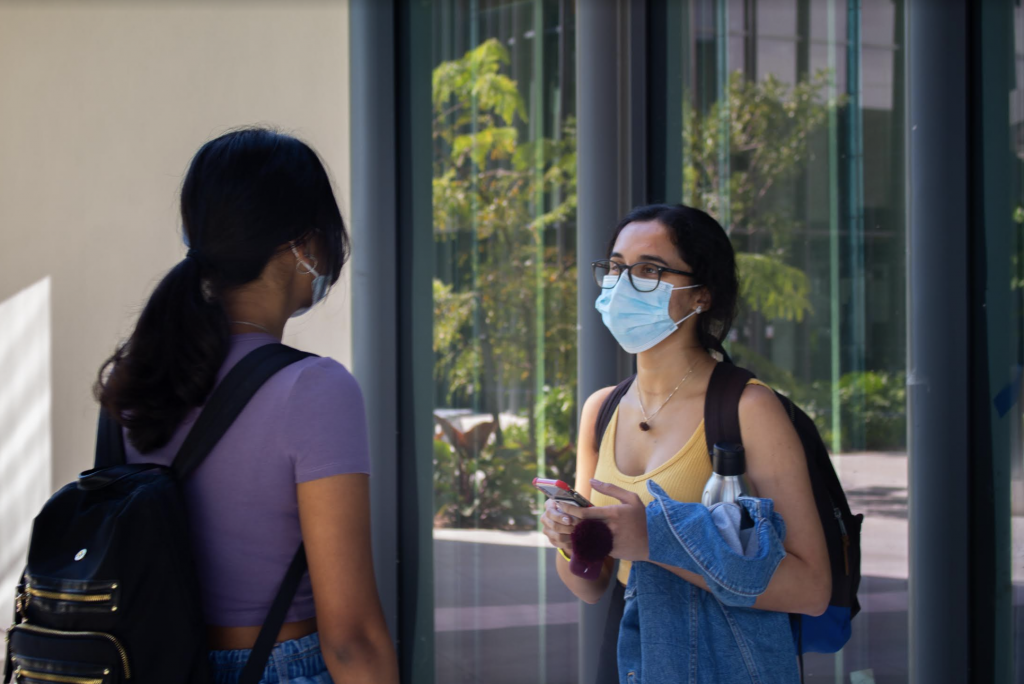 Juniors Vrinda Kareddy and Pritika Reddy hang out in-between classes on campus Jan. 26. The University continues to mandate social distancing and the use of face masks on campus during the spring semester. Photo credit: Ally Gaddy

The university has reported zero transmissions as a result of classroom interaction and therefore, increased in-person instruction this spring semester. There are 320 more course sections this spring than in the fall. Continuing protocol from the fall semester, classrooms are set up with socially-distanced seating, Plexiglass for enhanced protection and sanitizing stations.

Among these in-person classes is an introductory course with more than 50 students. The course is taught in a make-shift lecture hall allowing for spacing between students. The professor teaching the course said in-person instruction is not a concern for her.

“I don’t feel unsafe,” said the professor. “Only a few students I’ve had to ask to put their face mask back on.”

The professor said she has consistently reported about 30 percent of in-person students attending lectures online as a result of mandatory quarantines and self-isolations.

UM asserts that it has adapted and improved COVID-19 safety measures this semester through stricter enforcement of the Daily Symptom Checker, mandatory weekly testing, a database to update faculty on the health of their students and a better understanding of how the virus is transmitted. However, the university is witnessing a record high number of students testing positive. As of Feb. 18, the university has reported 871 cumulative positive cases on campus since testing began on Jan. 4, a number that has risen quickly in comparison to the 1,600 COVID cases reported for the entire fall semester.

“While I have had to call out one or two people for not following safety regulations on campus, I do not believe any campus conduct is the reason for this massive spread of coronavirus,” said Alex Youssef, a senior public health ambassador. “I think it’s most likely things people are doing off campus.”

The Public Health Ambassador Program began in the fall of 2020 as a means of enforcing public safety on campus. The ambassadors are a group of UM undergraduates who circulate campus enforcing COVID safety protocols, such as social distancing and the proper use of masks. The university expanded the program from 75 students to 100 students this spring.

Less than one month into the semester, the highest single-day report of positive cases is nearly double last semester’s peak. On Nov. 19, 2020, new daily cases peaked at 68. On Feb. 1, 2021, there were 134 new cases on campus reported.

“Regarding the numbers, yes it’s been alarming,” said Imelda Moise, a professor of public health. “Especially the number of emails I’m getting from students in my class who say they are in isolation or quarantine.”

The Feb. 1 spike came after the weekend when fraternities hosted several parties off campus. Administration has since taken action to halt social gatherings and attempt to limit off-campus congregation. Two fraternities, Phi Delta Theta and Alpha Epsilon Pi, have since been ordered to cease operations.

Katie Ghougasian, a junior studying public health, said that while she has noticed an increased number of students on campus, student density theoretically shouldn’t have a significant impact on the spread of the virus.

“If students really did everything that the university wanted us to do, there wouldn’t be many COVID cases,” Ghougasian said.

Moise said she believes that to know what caused the spike in COVID cases on campus will require that we wait until the end of President Julio Frenk’s recently mandated campus quarantine.

On Feb. 5, 2021, President Julio Frenk announced a 10-day university wide quarantine lasting until Feb. 16. In an email to the university, Frenk announced that all social gatherings on campus were cancelled. Furthermore, students were told not to leave their residents unless attending class, going to work, attending inter-collegiate practice, going to the Wellness Center or to seek medical care.

“It’s unclear whether it is because more students came back with COVID, if it’s the greater density or if it’s more testing,” Moise said. “We will have to wait until the end of the quarantine and see what happened and what didn’t happen.”

Faculty express concern over progress of spring semester so far

While the origin of this mass spread is up for debate, some are more concerned with the reality of the situation.

The university confirmed reports that they have had to house students under isolation at off-campus hotels as on-campus isolation dorms experienced an overflow.

“Unfortunately, it happens very often in Miami that the execution was not as well thought out as I had hoped,” said an anonymous faculty member.

With this mass spread across campus, there has been much debate over whether or not the university should have opened its doors to the extent that it has and why they chose to do so.

“There’s a lot of issues that weigh into this, if it was just a public health matter, yes I would say, ‘Why would we bring all these people back on campus when we know it’s going to lead to more infection?’” said Professor Scot Evans, a professor of education and the President of UM’s American Association of University Professors chapter, a nationwide nonprofit organization of professors on campus. “But unfortunately, it’s just not that easy.”

Evans said he believes it was the wish of students to return to campus as well as the financial interests of the university.

One month into the spring semester, Evans said he is hoping for the best.

“Since we came back in the fall, I’ve been crossing my fingers that everything is going to be okay,” Evans said. “I don’t think that’s a great solution for public health, but I guess part of me has given up a little bit of the resistance; everybody’s frustrated with everything.”