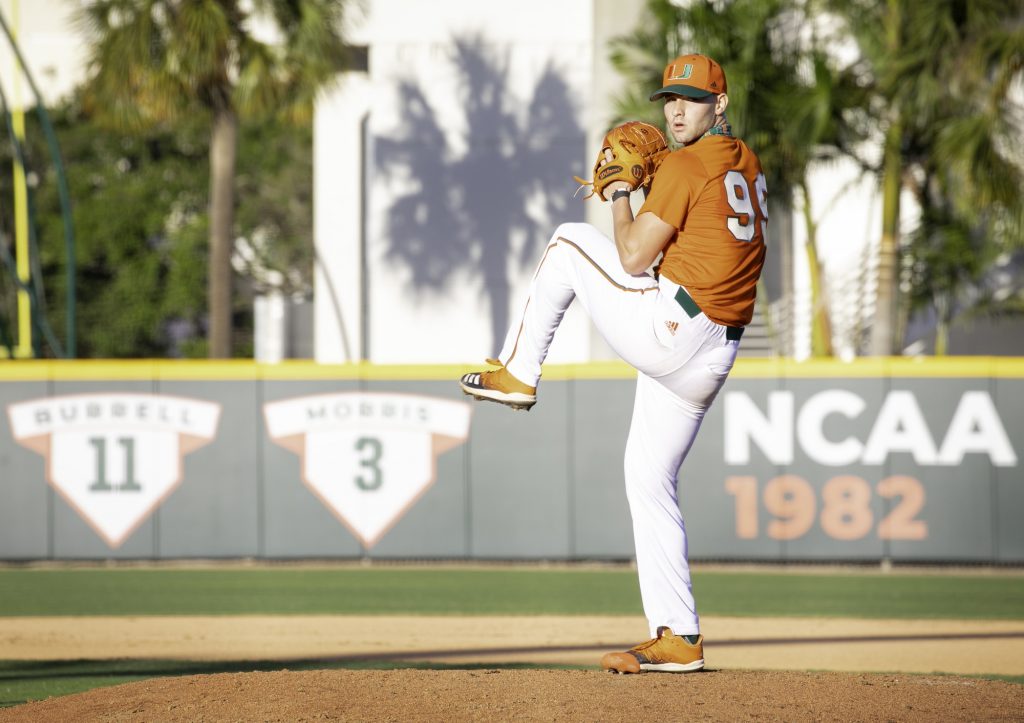 Daniel Federman will be the Friday night starting pitcher for the 2021 season. The senior has a 2.76 career ERA at Miami. Photo credit: Miami Athletics

A very familiar face and two newcomers will make up Miami’s starting weekend pitching rotation in 2021.

Federman earned the coveted Friday starting job after spending the previous three years as a middle reliever, closer and an occasional starter. He has a 2.76 career earned run average.

“I was fired up. I found out a couple days ago,” Federman said on Tuesday. “It was a goal of mine ever since I committed to Miami. Four years ago, I wrote on a goal sheet I wanted to be a team captain and the Friday night starter.”

Rosario and Mederos are two of Miami’s best arms in an incoming freshmen class that was a consensus No. 1-ranked class nationally. They will be the first freshman to start for the Canes on opening weekend since Bryan Radziewski in 2011.

Rosario comes to Coral Gables from Miami Christian School, where he was a high school All-American in 2019 while logging a 0.81 ERA. Mederos is a graduate of Westminster Christian School and was a four-year varsity letterman throughout his high school career.

“I have no problem playing freshmen…What sticks out is their ability,” DiMare said. “[Rosario and Mederos are] extremely, extremely talented guys.”

“The first thing that jumps out [about the freshman starters] is they’re both physically talented,” said pitching coach JD Arteaga. “They’re both middle to upper 90s guys. They throw strikes. They’re efficient…The future is very bright for both of those guys.”

“It’s probably some of the best news I’ve gotten in my life,” Rosario said on getting the news that he would start.

While Rosario and Mederos will fill big roles early in their respective careers, Federman hope to step up and be the experienced ace the Hurricanes need early in their three-game series.

“That Friday night guy sets the tone for the whole weekend…Federman has done just about anything we’ve asked. His temperament, the type of pitcher he is, he’s more suited as a starter,” Arteaga said.

Junior catcher and team captain Adrian Del Castillo said that Federman is Miami’s most experienced and “most consistent” pitcher. While the Pembroke Pines native hasn’t started a contest for the Hurricanes sine 2018, he did start six matchups in the Cape Cod League in 2019. Federman logged a 4.80 ERA, 28 strikeouts and seven walks for the Chatham Anglers.

DiMare says that a midweek starter has not yet been announced publicly or to the team. Miami doesn’t play a midweek game until March 9 against Florida Atlantic.

The Hurricanes open their season this Friday, Feb. 19 at the No. 1 Florida Gators.