Home » COVID testing not required for those administering tests

COVID testing not required for those administering tests 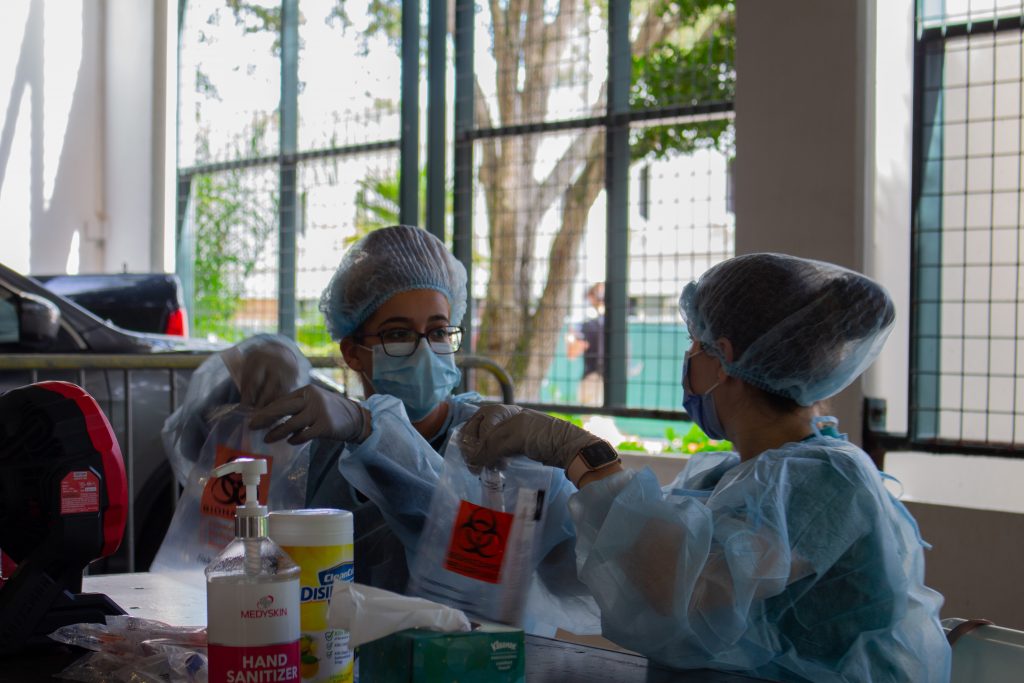 As the University of Miami struggles to keep its COVID-19 cases down, testing facilities across campus continue to monitor the status of UM’s faculty, students and staff. UM has prioritized student testing, mandating weekly tests for all students taking on-campus classes, while some staff have been told to test only when exhibiting symptoms.

“It’s by choice,” said Benadette Jones, a UM COVID observer at the Pavia Garage testing facility. “I’ve been tested, I’m good, but as far as everybody else, I don’t know if everybody’s been tested.”

COVID screeners confirm appointments and direct patients to test observers, who are tasked with monitoring patients’ self administered tests. Employees at the Pavia testing facility are required to take UM’s daily symptom checker, however they are only tested for COVID-19 if the check confirms they are showing symptoms.

UM responded to questions surrounding the lack of regular testing for testers by providing the following statement that all had access to the vaccine:

“Workers have all been vaccinated if they opted in to do so. They were prioritized as front line workers, given their risk of exposure. Protocol for testing follows guidance from UHealth and is consistent with practice for clinical staff across the health system.”

Maria Perez, a COVID screener, says that although most of the Pavia workers have been offered the opportunity for future vaccination, most have yet to receive their first dose.

“They don’t have enough, so we need to wait for them to call us,” Perez said.

Perez added that some of the staff at Pavia are awaiting a second dose, while others will have to wait in line for their first.

“A couple of people did it, but I wasn’t that lucky, so I have to wait,” she continued.

Jones said that although the university has encouraged its staff to get vaccinated in the future, many have not had access to the first round of doses thus far, adding that when they do receive the vaccine, it will be through MedPro, the company UM has contracted to fill its staff of observers.

“In the future, they were asking if this was to prolong that we would consider taking the vaccine, but it would be through the agency,” Jones said.

Workers at the Pavia testing center were quick to say that they are happy with the way UM has treated its staff. Students and faculty that require testing are directed to screeners, who confirm their appointments on the MyUHealthChart website and direct them to testing observers.

“It’s a smooth process, students come in all the time, and when they come it’s a 2-minute process for them to take the test,” said Jean Anzre Janvier, a test observer at the Pavia testing center.

“We’ve got everything that we need like sanitizers, we have all that so we can stay clean,” he said.

Despite the positive feedback from testing staff, some workers have gotten mixed messages on the importance of regular testing.

“I test only because I’m exposed to it, but I don’t think it’s recommended that you do regularly,” said testing observer Natalie Pinnock.

A statement from the university affirmed, “The University and UHealth has built up its testing infrastructure to be able to process 3,000 COVID-19 tests per day.”

“I think it’s very efficient because at least you know every week there’s a guaranteed test, and if you know that the students are being safe, then everybody is safe,” said Jones.

Some of the workers at the Pavia testing center say they applied for their positions after being laid off due to the COVID outbreak, either at UM or other institutions. COVID screener Cassandra White, a former administrative assistant for the Frost School of Music, said UM contacted her after laying her off to see if she was interested in working for the testing center.

“It’s a little bit different—I’m used to being in a close environment, working with music students, now here I’m working with all of the students,” White said. “It has been great because you get to learn different aspects of the campus and students within different departments and the dorm rooms.”

Perez said that she was working for an insurance company before being laid off during the pandemic.

“A friend of mine told me about this position, and I applied, and they called me. It was simple, not too much trouble,” she said.

Although they come from different backgrounds, the majority of the workers at Pavia testing facility are working 12-hour shifts from 8 a.m. to 8 p.m., Monday through Friday.

“Sometimes if they offer weekends, we’ll take a shift on the weekend,” Jones said.

Despite the testing facility efficiently administering thousands of tests a week, the spread of COVID-19 has increased over the course of the spring semester. After amassing a total of 1,606 cumulative positive test results throughout the duration of the fall semester, UM has seen its case count swell to 854 through the spring semester’s opening month.

“I don’t think testing makes a huge difference,” said Carson Toft, a freshman economics major. “To each their own, but I don’t feel any more safe or less safe without it.”

Despite Toft’s doubts about the effectiveness of campus-wide testing in slowing COVID’s spread, he said he feels UM’s efforts are an important step to returning to normalcy.

“I feel like it’s a necessary evil. Nobody wants to get regularly tested, but in terms of the general well-being of the public and this university, I think it’s necessary.”

Toft also voiced doubts that those who ignore testing protocol are subject to university discipline.

“Last semester one of my friends said ‘Oh yeah I forgot to go yesterday’ and he never ended up going, and nobody addressed that with him,” he said. “He was not told to come in another time, they just didn’t really do anything about it.”

UM confirmed that their testing policies are enforced through weekly reminders through a written response to the Hurricane’s questions:

“Any student who will be on any University of Miami campus at any point during the spring semester will be required to take a COVID-19 test at least once every week. Students will receive emails and/or text message alerts to schedule their on-campus testing appointments, and UScreen follows up with students who do not appear for their appointment.”

Whether due to increased testing or COVID fatigue, cases at UM are on the rise.

Many students are happy that the university has made an effort to increase its testing capacity over the course of the pandemic.

“Since I’m teaching twice a week, multiple classes, I would prefer everyone to get tested because you don’t know how many people they have come in contact with,” said Rexa Han, who is completing her doctorate at the Frost School of Music.

“The school needs us to be on campus to teach, I understand that, and the school did a pretty good job,” she continued.

Other students say they think the university’s efforts are an overreaction, like Souley Bangoura, an undecided freshman business major.

“I don’t really think it matters, I think that this is a pretty big overreaction to a flu-like disease, but I listen to it because I guess I try to protect others,” said Bangoura.

The hookup pact: How students are staying safe and having sex during COVID
Gino DiMare announces UM’s weekend pitching rotation