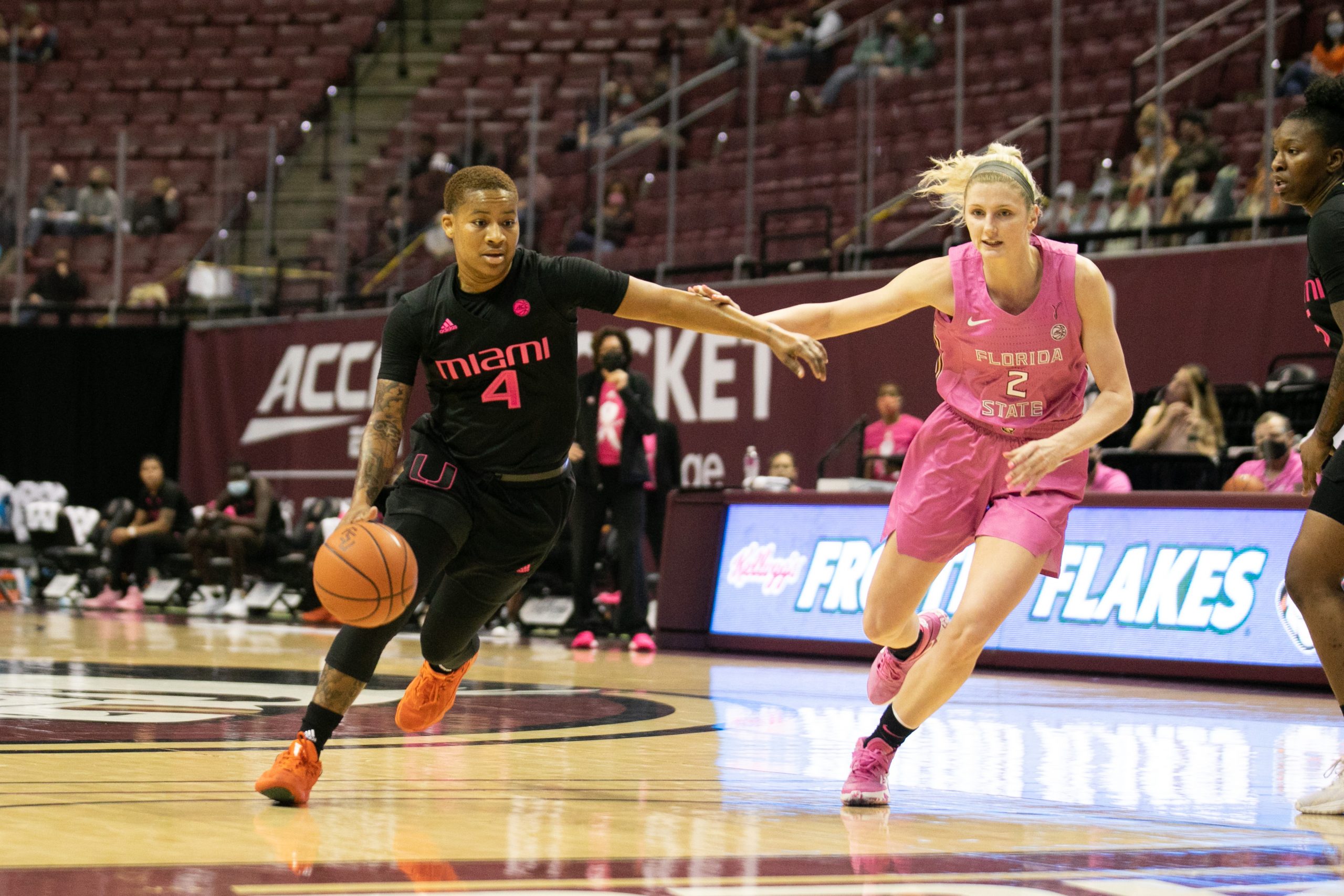 Only one week removed from beating Florida State at home, Miami headed north to Tallahassee, looking to be the first team to upset the Seminoles at home this season.

“I thought they played with more energy,” Miami head coach Katie Meier said about the Seminoles. “When they were in Coral Gables, they had a flat performance.”

“I think the starters were absolutely flat,” Meier said. “I shouldn’t be coaching energy, I just shouldn’t. I had to and I had to burn timeouts, which ended up biting us in the butt later in the game.”

The Canes entered the half down 14, but made a run to close the gap in the third quarter. Veteran forward Destiny Harden led the team with a seven point run in the third quarter and freshman Nyayongah Gony stepped up to build the momentum by nailing a shot from the outside. She was followed by junior Naomi Mbandu, who hit a clutch three at the end of the quarter to close the gap to seven points.

“The third quarter is how we need to play all the time,” Meier said.

However, the Canes starters failed to show up in the other quarters, making it hard for the team to come back. With star guard Mykea Gray out for the season with an ACL injury, the team’s starting line-up has suffered drastically. Senior guard Kelsey Marshall has taken over as the leader of the team, but she fell short and finished the day with only four points.

“She had a really bad night and she’ll bounce back,” Meier said. “If Kelsey doesn’t score, we usually don’t score in the 60s and it happened again.”

Despite the performance from its star players, the Miami bench was able to rally together to total 30 of Miami’s 59 points.

“I am proud of the bench,” Meier said. “I thought Sydnee [Roby] was a good spark and of course Nyayongah Gony. Jamir [Huston] had great energy and Taylor [Mason] stayed within herself and tried to lead the team.”

The Seminoles’ offense proved to be too strong for the Canes, who allowed four players to score in double digits. Junior forward Kourtney Weber had a team high 15 points and guard Bianca Jackson recorded 13 points and eight assists. Center Valencia Myers stood out in the post and recorded 12 points and five rebounds. Guard Sammie Puissi scored 12 points.

As the Canes look to wrap up their season, Meier said the team needs to stick to the plan.

“We don’t have anyone who can transcend the game play, or transcend team ball and carry this team,” she said. “We have to follow the plan, we have to stick together.”

Miami will head to Atlanta in two days to play Georgia Tech as the team continues a difficult four game stretch over eight days.