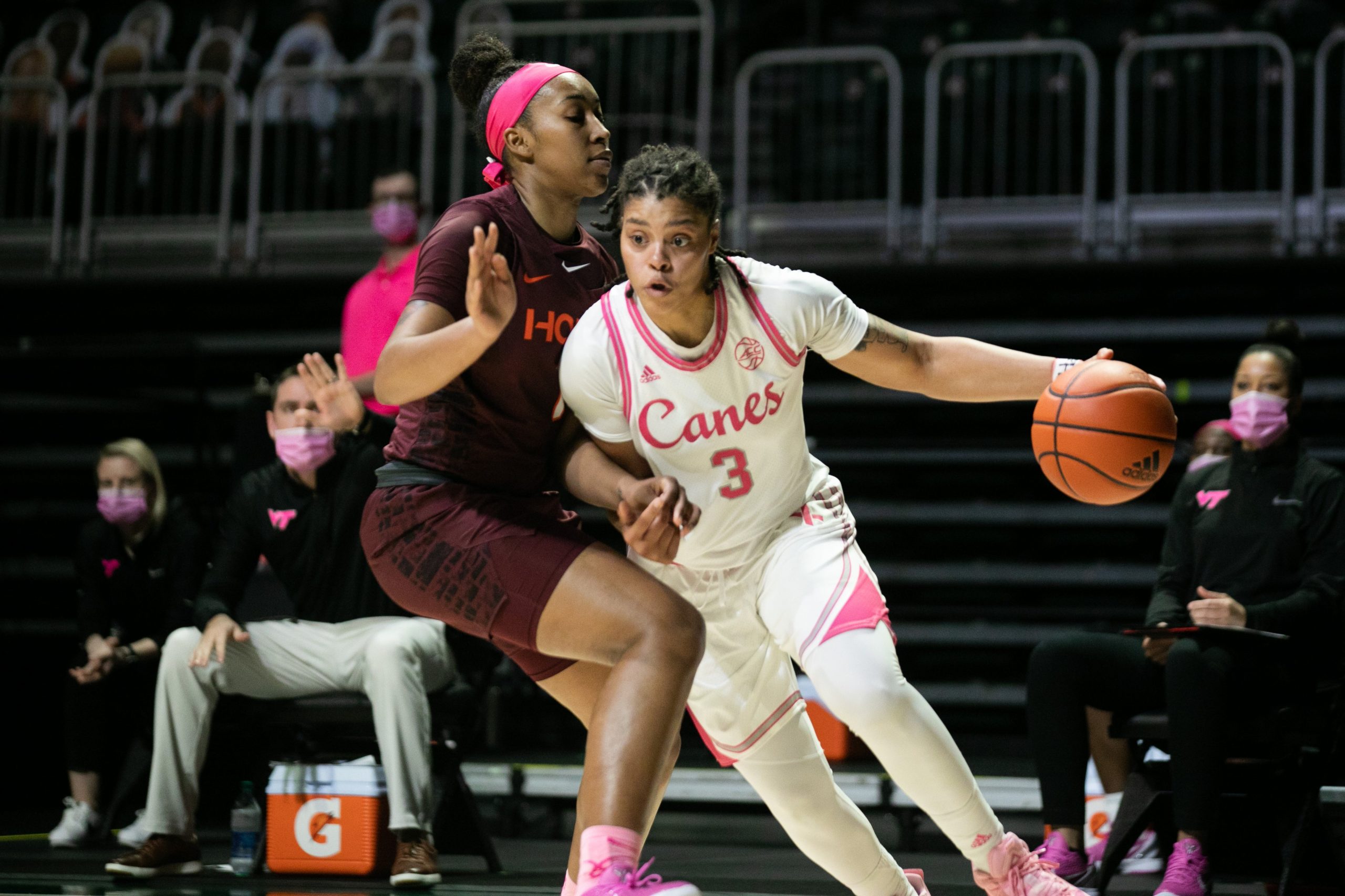 Looking to establish their first winning streak in the Atlantic Coast Conference this season, the Miami Hurricanes ended a three-game home stand with a loss to the Virginia Tech Hokies in the annual “Pink Game” at the Watsco Center.

Despite entering the contest 11-2 at home all-time versus Virginia Tech (11-7, 6-7 ACC), Miami (8-8, 5-8 ACC) was unable to rally off a win just a few days after recording its fifth double-digit win of the season in the victory over Florida State on Sunday.

After a 19-point scoring performance in the third period, the Canes cooled off in the fourth, scoring just nine points total and closed the game with a four-minute scoring drought. The Hokies maintained their hot shooting, however, as Sheppard led with nine of her own.

“Virginia Tech is a tough team to solve,” Miami head coach Katie Meier said. “They shoot the three so well, and obviously Kitley was killing us. So, you gotta try to turn them over. From the hashmark in and their court-to-court offense, they’re as good as a team in the conference and the country, really. They’re the hottest team in the league right now.”

Still fresh off of multiple wins that featured an upset over No. 2 NC State in overtime and a game decided by 19 points at Pittsburgh, Virginia Tech earned its third consecutive win off of 16 assists and Amore’s 5-of-6 shooting from three-point territory.

Miami maintained a two-point lead halfway through the first quarter, though Amoore’s two-straight triples and Kitley’s jump shot sparked an 8-0 run to give Virginia Tech the 15-9 advantage.

“Between Sheppard and Kitley, that’s hard enough, and then you have Amoore that just blistered us,” Meier said. “Congratulations to them, they shared the ball well and we did not. We only had five assists in the first half. You can tell when we’re playing well, we have assists and we get to the free throw line, and we just did not get to the free throw line at all. In fact, when we did, we didn’t make them anyway.”

The Hokies remained strong in their offensive attack throughout the second period, shooting 44 percent. Guard Cayla King converted on a 3-point field goal while Sheppard added a three to help initiate a 10-0 burst, Virginia Tech’s largest of the evening.

Redshirt junior Destiny Harden, who suited up for Thursday night’s matchup averaging only 7.5 points per game, paced the Canes with 20 points on 9-of-14 shooting while corralling 12 rebounds. Her performance was not enough for the needed win, however.

“Our response is that [we] just gotta go hard practice tomorrow in practice and give it our all in the next couple of ACC games until we get to that ACC Tournament,” Harden said. “Just keep believing in ourselves and make each other accountable for everything that we do.”

Though Miami trailed 41-27 at the half, senior guard Kelsey Marshall opened with a 3-point make and Harden followed with another to cut the Virginia Tech lead to 10 at 43-33.

“She [Harden] was plus three in a game that we lost by 20, so that tells you what an effort she gave,” Meier said. “Endia [Banks] was just a little disjointed and Naomi [Mbandu] was a lot disjointed and so Destiny stepped up, and I’m really proud of her. I thought she did a heck of a job.

“They just have more offensive firepower than we do, and so we couldn’t go off the reservation. I think Destiny stayed in the game plan, kept things simple, one of the few players that I think kept her composure the whole game,” Meier said.

The Hokies later countered with a 7-0 run, however, and widened the spread to 17 off of a three from Amoore, who scored 11 in the third frame on a perfect 3-of-3 from downtown.

“I don’t like to dump on teams, there’s still time on the clock and we still had things we could do,” Meier said. “When we started pressing a little bit more, we got our energy back; but you’ve got to make a shot to press, so we have to shoot a certain percentage to get our opportunities to press. In that third quarter, we were making shots there came our personality.”

With two more 3-point makes from Amoore, Virginia Tech held a 12-point lead, 58-46, heading into the final 10 minutes. Harden and freshman forward Nyayongah Gony combined for a 5-0 run by the six-and-a-half-minute mark, though guard Azana Baines, answered with four points to maintain a 19-point lead.

“The start of the fourth, once again [we] just went off the reservation,” said Meier on Miami’s lack of focus. “I was trying to keep them on the reservation, trying to keep everyone on the same page, keep them faithful. I believe in them, and that’s what I told them in the locker room. No matter what, when you turn on [the game] you’re going to see us in pink uniforms, but we’re gonna show our fight and that we’re willing to battle.

With another conference loss behind them, the Canes travel to Tallahassee, Florida, to face a familiar foe in Florida State on Sunday, after holding the Seminoles to a season-low 53 points last Sunday.

The Canes and Noles will tip off from the Donald L. Tucker Civic Center at 2 p.m.