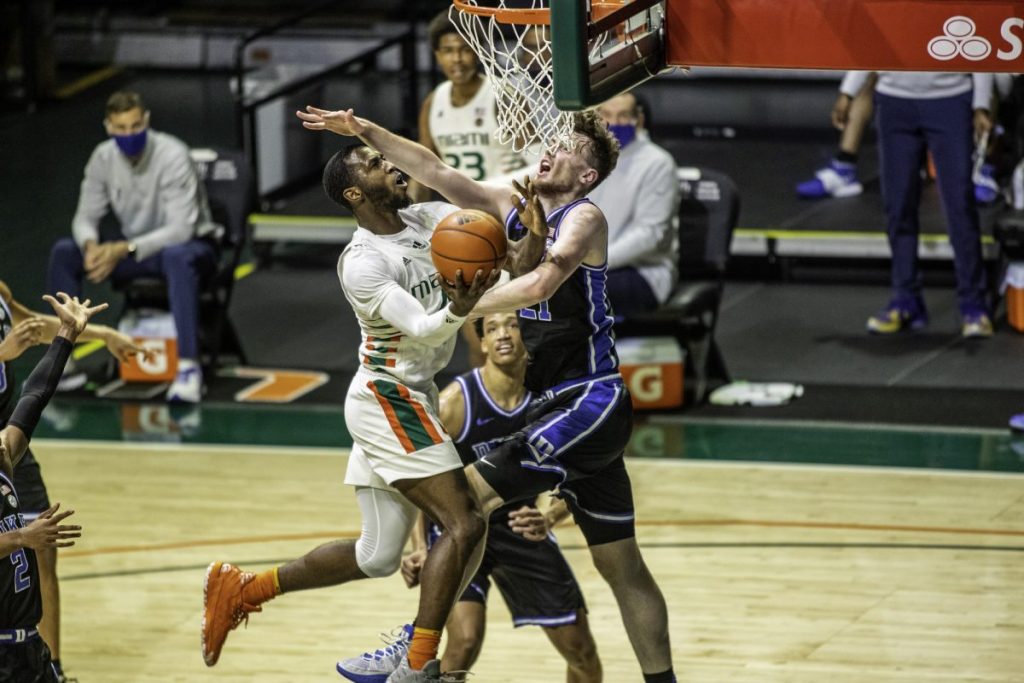 Senior guard Elijah Olaniyi had a team-high 21 points in Miami's win over Duke. Miami was led by three players with over 15 points at the Watsco Center on Monday Feb. 1. Photo credit: Josh Halper

The Duke Blue Devils, unranked for the first time since 2016, came into Monday night’s game against the Miami Hurricanes with five losses and left the Watsco Center with six.

In a season full of unexpected surprises for the Hurricanes, the 77-75 victory over the Duke Blue Devils was no exception.

“I just told them how proud I was of them, and this all started yesterday with the team meeting,” Miami head coach Jim Larrañaga said about what he told his team after the game. “A very good team spirit that was exhibited. Everybody was in a good mood, everybody was smiling.”

Without Chris Lykes (left ankle), Earl Timberlake (left shoulder), Rodney Miller and Sam Waardenburg, who are out for the season, and with last week’s parting of ways with freshman Matt Cross, the Hurricanes (7-10, 3-9 ACC) only had seven scholarship players available.

But Elijah Olaniyi, who missed the game against Wake Forest with a left shoulder injury, was back in the starting lineup and contributed for Miami in a big and much-needed way.

Olaniyi, a senior guard, led Miami in scoring with 21 points and seven rebounds. Olaniyi shot 80 percent from field goal range and 60 percent from the 3-point line. 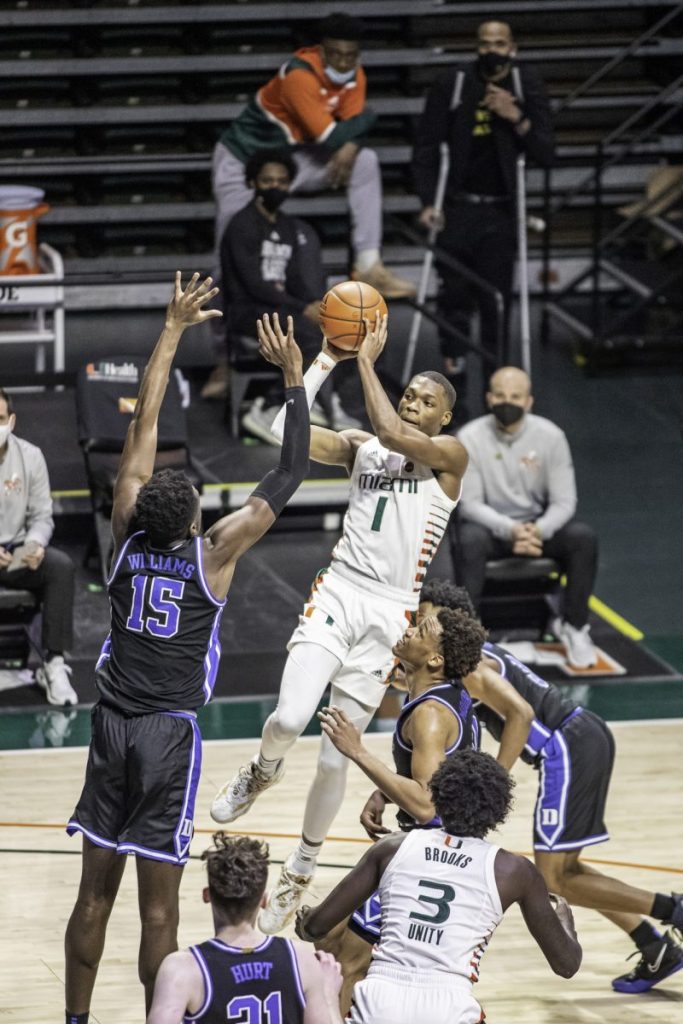 Sophomore forward Anthony Walker attempts to make a pass during the late stages of Miami's win over Duke on Monday Feb. 1. Walker had 16 points and went 6-9 from the field, 1-2 from three, and 3-4 from the free-throw line. Photo credit: Josh Halper

“I didn’t play last game and dealing with this bum shoulder,” Olaniyi said. “I was able to just really lock in and focus and maximize my attempts.”

“If we didn’t have Elijah tonight, we would have no chance,” Larrañaga said. “He’s got a damaged shoulder. His left shoulder has been bothering him for a while, but he rested, and today the shoulder wasn’t bothering him, so he had lots of energy, and he played every aspect of the game. He was defending, rebounding, going after the ball. He was sharing the ball on offense but also nailing 3’s.”

Sophomores Isaiah Wong and Anthony Walker both contributed 16 points. Miami outshot Duke from both field-goal range, 53 percent and 3-point range, 54 percent, to Duke’s 46 percent from field goal and 28 from the 3-point line.

Standing at sixth place in the Atlantic Coast conference, the Blue Devils (7-6, 5-4 ACC) are having an uncharacteristically bad season and are unranked for the first time since 2016. They’ve lost to Michigan State, Illinois and had consecutive losses to Virginia Tech, Pittsburgh, Louisville and now Miami. 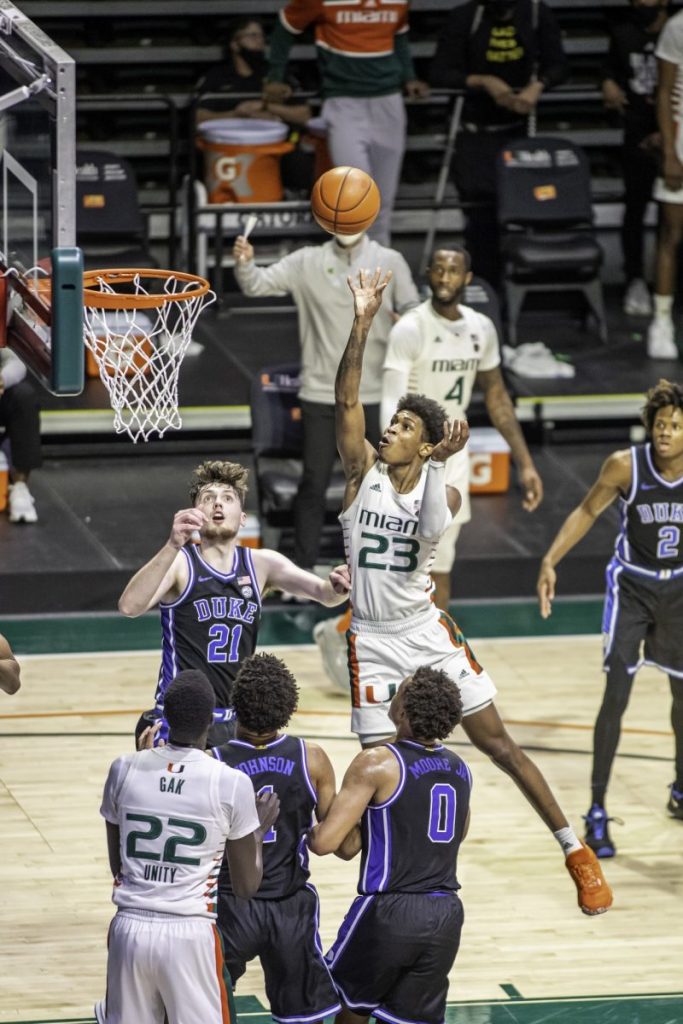 Redshirt senior Kameron McGusty goes over the top of two Duke players for a bucket in Miami's win over Duke Monday Feb. 1. The Hurricanes shot 52.5 percent from the field and 53.8 percent from 3-point range. Photo credit: Josh Halper

In the second half, Duke held the lead until the 10-minute mark, when Miami went on an 8-0 run to go ahead 57-51. The Hurricanes managed to hold on to the lead for the rest of the second quarter.

“The main message was playing defense,” Wong said after the game. “He told them Duke would turn the ball over, and we played through the zone. We had players coming back, Elijah came back, and we turned it around. We’re going through adversity right now, but we’re finding ways and trying to end this season better than how we started it.” 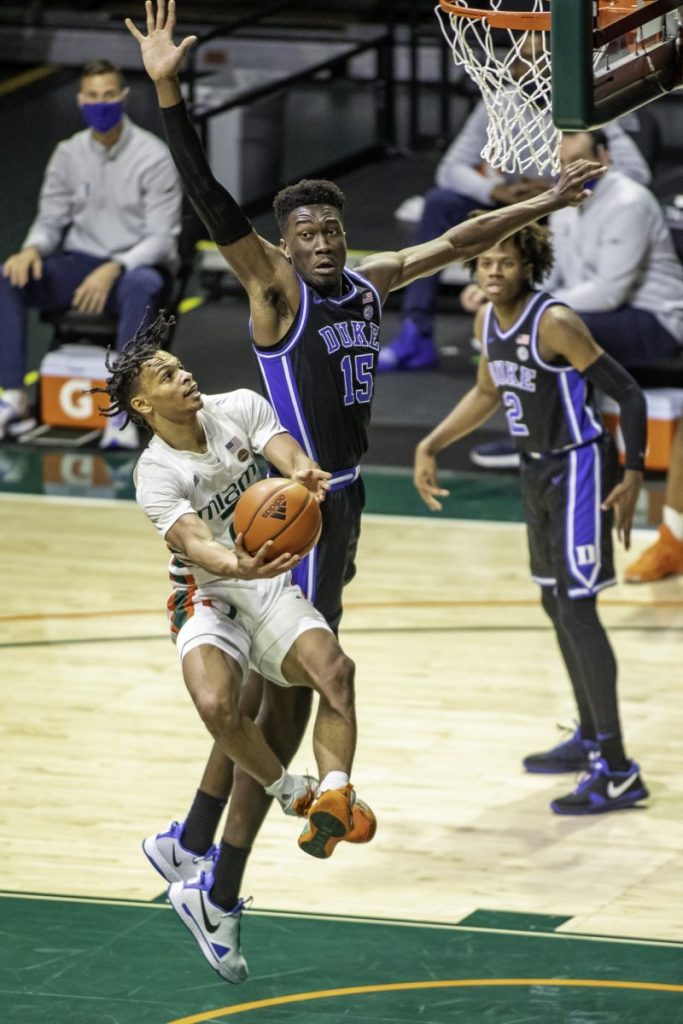 Sophomore Isaiah Wong attempts to draw a foul while on his way to 16 points against Duke on Monday Feb. 1. The Hurricanes beat the Blue Devils 77-75. Photo credit: Josh Halper

Miami will have the chance to take down another top ACC team on Saturday when they host the No. 16 ranked Virginia Tech Hokies at the Watsco Center.

“One win could get us going in the right direction,” Olaniyi said.

Miami leaves Clemson with 2 first-place finishes and an impressive young team
Remote students return to campus: ‘I appreciate so much more’