Home » No. 18 Hurricanes come back from 21-point deficit but fall short against No. 21 Oklahoma State without QB D’Eriq King in Cheez-It Bowl

No. 18 Hurricanes come back from 21-point deficit but fall short against No. 21 Oklahoma State without QB D’Eriq King in Cheez-It Bowl 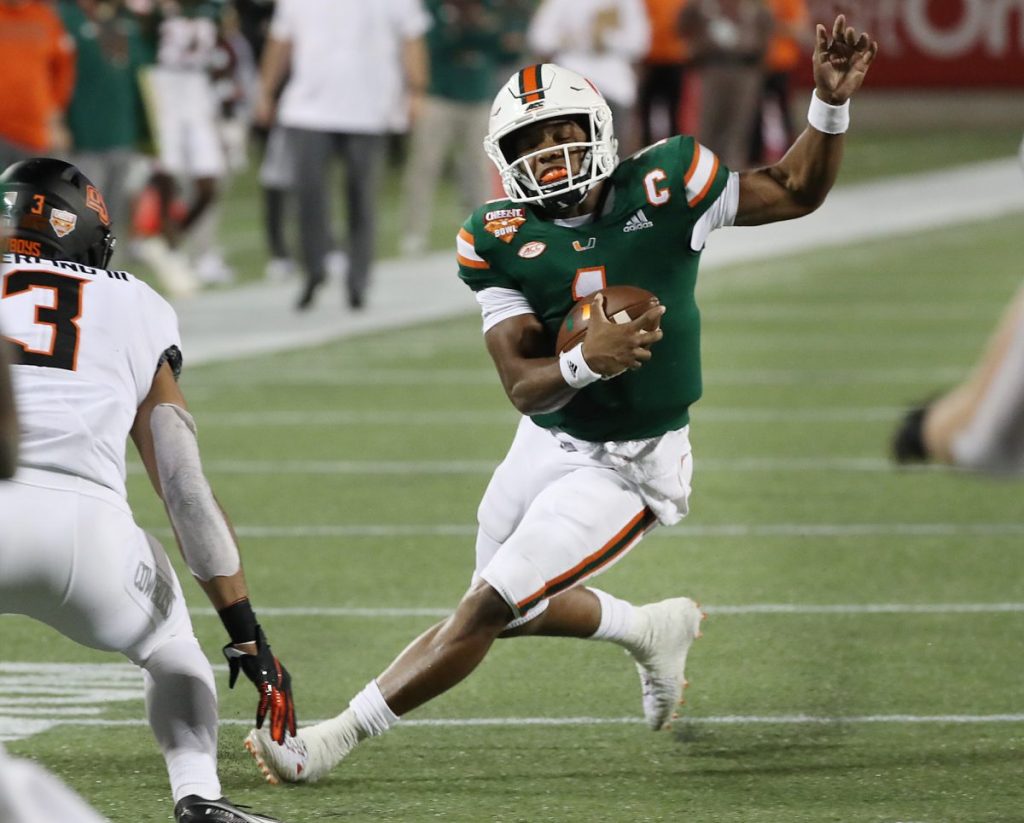 After giving up 21 points in the first quarter to No. 21 Oklahoma State, it seemed as though nothing was going the Hurricanes way. And then even worse, Miami quarterback D’Eriq King went down with a right knee injury and was ruled out for the remainder of the game.

The No. 18 Hurricanes (8-3, 8-2 ACC) managed to rally back behind backup quarterback N’Kosi Perry, but the valiant effort fell short and the Hurricanes fell 37-34 in the 2020 Cheez-It Bowl at Camping World Stadium in Orlando, Florida.

Miami, now 1-10 in bowl games since 2008, ends the season with two consecutive losses. King’s status right now is uncertain and he will be evaluated once the team returns to Coral Gables.

“In a year that’s had so much adversity and for a guy that does everything right, that is a difficult pill to swallow for the entire football team,” said Miami head coach Manny Diaz on King’s injury.

King finished with 10 completions on 13 attempts, 113 passing yards and a touchdown before he went down with a right knee injury.

N’Kosi Perry took over for King and impressed with 228 passing yards, completing 19 passes on 34 attempts with two touchdowns.

“I was ready right away,” Perry said. “I think we took a positive step tonight, even though we didn’t come out with a W. I think we are really building something here and it’s going to be really great for us next season.”

“I am very disappointed we didn’t come away with a win but I’m just happy to be on this team, there is no quit,” Jordan said after the game.

After King went down, Miami’s defense seemed to settle in and forced Oklahoma State to punt a couple of times. The Hurricanes nearly tied it up at 21 points with a 42-yard touchdown run by Cam’Ron Harris and a two-point conversion attempt by Brevin Jordan, which was called short of the goal line, so Miami settled at 21-19 at the start of the second half.

The Cowboys pushed their lead to 31-19 on a 5-yard touchdown pass from quarterback Spencer Sanders. Sanders threw for 305 yards and four touchdowns, three of which were caught by freshman receiver Brennan Presley, who finished the game with six receptions for 118 yards.

Brevin Jordan’s second touchdown lessened the lead to 31-26 and Oklahoma State missed the extra point on their next touchdown. The Hurricanes pulled within three points after Mike Harley scored on a 5-yard touchdown run and Marshall Few converted the two-point attempt. The Hurricanes had the opportunity to at least kick a field goal with under two minutes to go in the game, but they could not advance the ball past the 50-yard line and turned over on downs.

“The way we battled, the way we fought, was inspiring,” Diaz said. “We continued to fight and the team rallied behind N’Kosi and didn’t flinch. I’m proud for N’Kosi for the way he went in there and played hard, but ultimately made too many mistakes to a good Oklahoma State team.”