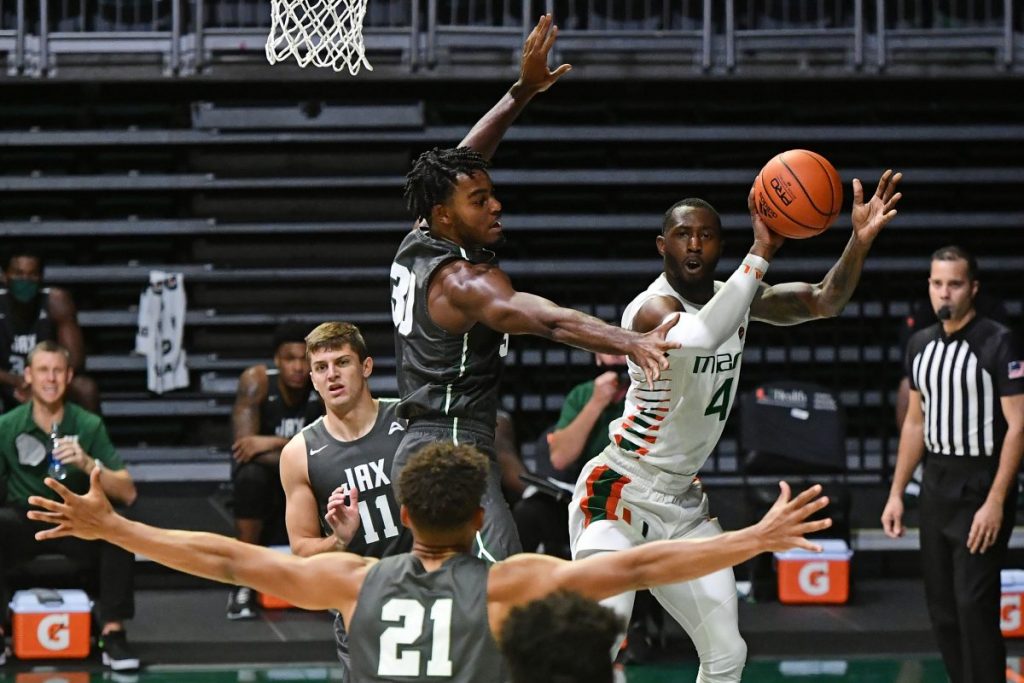 Sophomores Isaiah Wong and Anthony Walker combined for 43 points as the Miami Hurricanes men’s basketball team won their final non-conference matchup of the season against Jacksonville, 73-64, on Saturday afternoon at the Watsco Center.

The Hurricanes (4-2, 0-1 ACC) earned their fourth win of the season in part due to the 12-point performance of freshman guard Earl Timberlake, a former four-star recruit who made his UM debut after being sidelined with multiple ankle injuries in the team’s first five games.

Miami dominated Jacksonville (6-3) in rebounding, 49-26, with 19 rebounds on the offensive glass, despite committing 16 turnovers and allowing 30 points in the paint. UM also shot 21-of-25 from the foul line, a stark contrast to the recent poor performances.

“We’re very fortunate to come away with the victory,” said Miami coach Jim Larrañaga, who has now tied legendary college basketball coach John Wooden on the all-time wins list at 664.

“I was very happy to see our guys go 21-for-25 from the foul line,” Larrañaga said. “I thought our defense in the first half actually was very good, but we really struggled to start the second half in defending the 3-point shot. At least we were able to stay out in front, we never fell behind which we were much in danger of late in the game.”

Wong finished with yet another astounding individual performance, pacing the Canes with 25 points on 9-of-18 shooting while making three of the team’s six 3-point field goals. He also grabbed nine rebounds. The sophomore has settled into his starting guard role well this winter, scoring 15 or more points in five of six games.

“For our team coming into this game, it was all hype,” Wong said. “It showed yesterday to be honest. That’s how we all felt moving the ball in practice, getting open looks, dunking the ball, and I feel like it translated into this game [given] how we started off and then in the second half with how we ended the game.”

Timberlake, who had started off the season watching from the sideline in a walking boot, came off the bench and provided the spark Larrañaga and his team have been desperate for with senior starting guards Chris Lykes and Kameron McGusty still out with an ankle and leg injury. Timberlake added five rebounds and two assists.

“His presence on the court, some of his passes, his ball movement, his athletic ability I thought was very helpful,” Larrañaga said. “I think one of the things about Earl Timberlake is he’s a great competitor, and he’s going to do everything possible to win the game.”

Larrañaga praised Timberlake’s overall effectiveness in defending Jacksonville’s leading scorer in forward Dontarius James, who scored a team-high 19 points with five 3-point baskets, and being the team player the program knew they would eventually utilize well.

“He did a great job on James in the first half,” Larrañaga said. “He puts himself involved in almost every situation, whether it’s defense, rebounding, handling [and] shooting the ball, getting other guys involved. He’s very, very active at both ends of the court. You could see he’s rusty, it’s not like you’ve seen the best of Earl Timberlake today. He is a high-octane player.”

Similar to his coach, Wong also remained impressed with Timberlake’s willingness to contribute on both ends of the court.

“He’s a great player to play with,” Wong said. “[He] passes the ball, he can shoot, he can lay the ball up, and he’s just a big, stocky guard. He can guard any position in which really helps us as a team.”

Walker had a breakout game of 18 points after shooting a perfect 8-of-8 at the foul line, while securing 10 rebounds.

“As games go on, my confidence continues to grow and I’m just going to keep on producing,” Walker said. “This isn’t the ceiling; I’m going to keep growing and we’re going to keep improving as a team.”

Miami did see five of its players (Walker, Nysier Brooks, Elijah Olaniyi, Harlond Beverly, and Timberlake) commit three or more fouls, though their opponent only shot 4-of-10 from the foul line.

Jacksonville was led by their starting forwards in James and Bryce Workman, who had 19 and 14 points each before both fouling out in the second half.

The Hurricanes led, 37-26, at halftime. The Dolphins scored 14 points in the paint in the first half to keep the spread close, and later completed a 15-4 run by the nine-minute mark to cut the Canes’ lead to three.

Willing their team to victory, Wong and Timberlake totaled 10 of the team’s final 12 points to send Jacksonville home without a comeback win.

Miami will not play their next game until Dec. 29 against ACC foe Virginia Tech at Cassell Coliseum, the Canes first road game of the season. The matchup will be televised on the ACC Network at 6 p.m.

Shorthanded Hurricanes fall 70-55 to Pittsburgh
I survived the vaccine. So will you