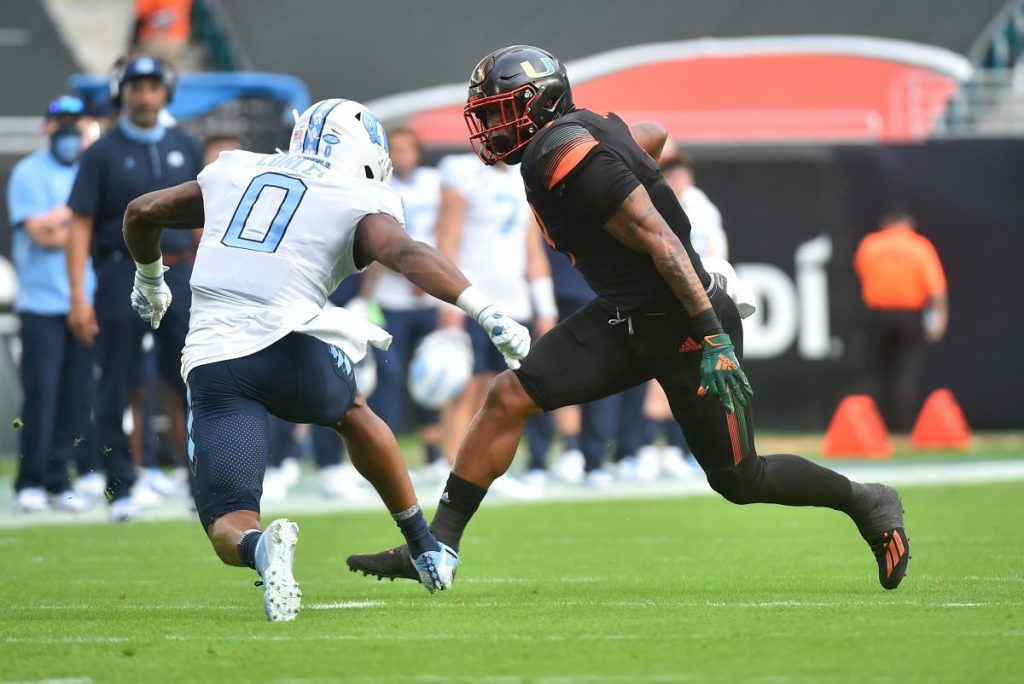 ABC’s broadcast team of Chris Fowler and Kirk Herbstreit held nothing back in the closing minutes of the Hurricanes’ first half against the North Carolina Tar Heels.

The Canes had fallen behind 34-3 en route to a 62-26 loss at Hard Rock Stadium on Saturday to close out the regular season.

Both announcers were as shocked as UM’s fans were. Fowler called the game a “mismatch.” Herbstreit said the single showing (or lack thereof) may have wiped out an entire season of credibility.

The final box displayed an astounding 778-314 yardage advantage for the Tar Heels and a jaw-dropping 554-75 rushing yard differential in favor of UNC.

The juxtaposition is astounding. One week prior, Miami had pitched their first Atlantic Coast Conference shutout since joining the league in 2004. Saturday however saw UM allow more points than in any other game in program history.

“We got our ass kicked,” said head coach Manny Diaz. It was a humiliating performance.”

The contest was expected to be a shootout between two of the ACC’s more explosive offenses. A Miami win could’ve meant an Orange Bowl berth and a chance to win 10 games for just the second time since 2003.

Instead, Tar Heels marched into South Florida undeterred and with an attitude. Nothing that had happened previously in 2020 mattered. North Carolina threw the first punch. Miami—led by standout quarterback D’Eriq King—had a chance to answer. But no answer came. Plagued by consistent mistakes and falling further behind with each UNC possession, the Canes suddenly have more questions than answers as the conference slate comes to a grinding and bitter conclusion.

It was easy to guess that the Tar Heel offense and quarterback Sam Howell would perform very well.

UM was never going to shut down Howell and the Carolina offense like they did in the shutout win at Duke a week ago. The goal was to simply limit their production and outscore the Tar Heels.

But that didn’t happen. Suffering such a slow start was both inexplicable and too much to overcome. The Canes allowed touchdowns on UNC’s first three drives while the Tar Heels averaged 10.4 yards per play and 10.1 yards per rushing attempt over the matchup.

“They just came to play and we didn’t,” said defensive end Jaelan Phillips.

Howell finished with a line of 14 completions on 19 pass attempts and 223 yards passing. The Heels inexplicably had both a 300 and 200-yard rusher, with Michael Carter going for 308 yards and Javonte Williams adding 236 yards on the ground. The Heels’ ground game came behind an offensive line coached by Stacy Searels, a former UM assistant that Diaz immediately fired upon taking the head coaching job two years ago.

“They didn’t run any plays tonight that we didn’t practice against or expect to see. When you’re not playing your best, that’s what it looks like, especially against a really explosive offensive football team,” said Diaz.

North Carolina offered a much sterner test for Blake Baker’s defense than Duke last week. But such an apparent regression in one week’s notice, regardless of foe, is unconditionally alarming.

A hole too deep to overcome

The Heels are a fast scoring team, but Miami’s offense had every opportunity to answer each time they scored.

Instead, they let opportunities slip, and UM’s chances to win Saturday steadily collapsed with each error.

On the Canes’ opening drive, they drove deep into UNC territory only for the possession to stall after two plays for no gain.

Down 7-3 later in the first quarter, cornerback DJ Ivey intercepted Howell, but the Hurricanes were flagged for too many men on the field. The Tar Heels would score to make it a multiple-possession game soon after.

The Canes attempted to mount an answer on the next drive, and even crossed midfield. But running back Don Chaney Jr. was stopped on a 4 th &amp; 1, the Heels took over right then, and scored on the very next snap behind a 65-yard Carter run.

It seemed over at that point.

“We got our ass whooped all night,” said King. “It wasn’t good in any phase of the game. I think we came out flat. We didn’t play as good as we can tonight, not even close.”

Offense falling short of the bar

Miami needed a big day out of its offense if they were going to have a chance to win. There was no reason why that couldn’t have happened. UM had shown ability to score and play with tempo all season.

On a day mostly void of positivity for the Canes, Rhett Lashlee’s offense did salvage a few silver linings Saturday.

The late production UM was able to squeeze from its offense was not an anomaly. Its attack has been potent all season.

But relative to gameplan expectations, the offense still fell short. They needed more than an above-average day to beat an offense like Carolina’s.

“Being the starting quarterback, if they scored 63, we have to score 64 and we didn’t do that tonight,” said King.

And after failing to score touchdowns on two early trips into UNC territory, the omen was apparent. Miami needed a near-perfect showing offensively, and lost that chance early in the game.

A deficit of more than points

All the energy seemed to evaporate into the Miami sky when UNC went significantly ahead. This came on an afternoon where the Canes seemingly had much to play for. UM had come back from multiple-score deficits at North Carolina State and at Virginia Tech, but no second wind hit the Hurricanes in the first half, even when the contest was getting away from the home team.

“Our enthusiasm and energy were lacking and then everything becomes difficult when that’s not there…I did not recognize the football team that I saw on the field tonight,” Diaz said.

“North Carolina came out and executed,” said Harley. “They just wanted it more. We had some guys that weren’t all in and we paid the price for it. North Carolina did what they had to do to get the win so we have to give all the credit to them.”

“I don’t think we had great energy on the sideline,” said defensive end Quincy Roche. “It was just a matter of not being locked in. I don’t know where it started but it was completely unacceptable.”

The regular season is finished, after 10 games overall and nine conference matchups. This is one contest fewer than planned, after news dropped Friday that next week’s home game against Georgia Tech has been cancelled.

Miami will now await their bowl assignment. The disappointing regular season finale is certain to add kerosene to the pile of criticism the UM program has consistently faced over recent years.

It’ll be on Miami to answer these newfound concerns by performing against whoever is placed in front of them in the bowl game and to win in the postseason for just the second time since 2006.

How COVID-19 changed Miami athletics this fall
2020 Year in Review: UM community reflects on its challenges amid resiliency