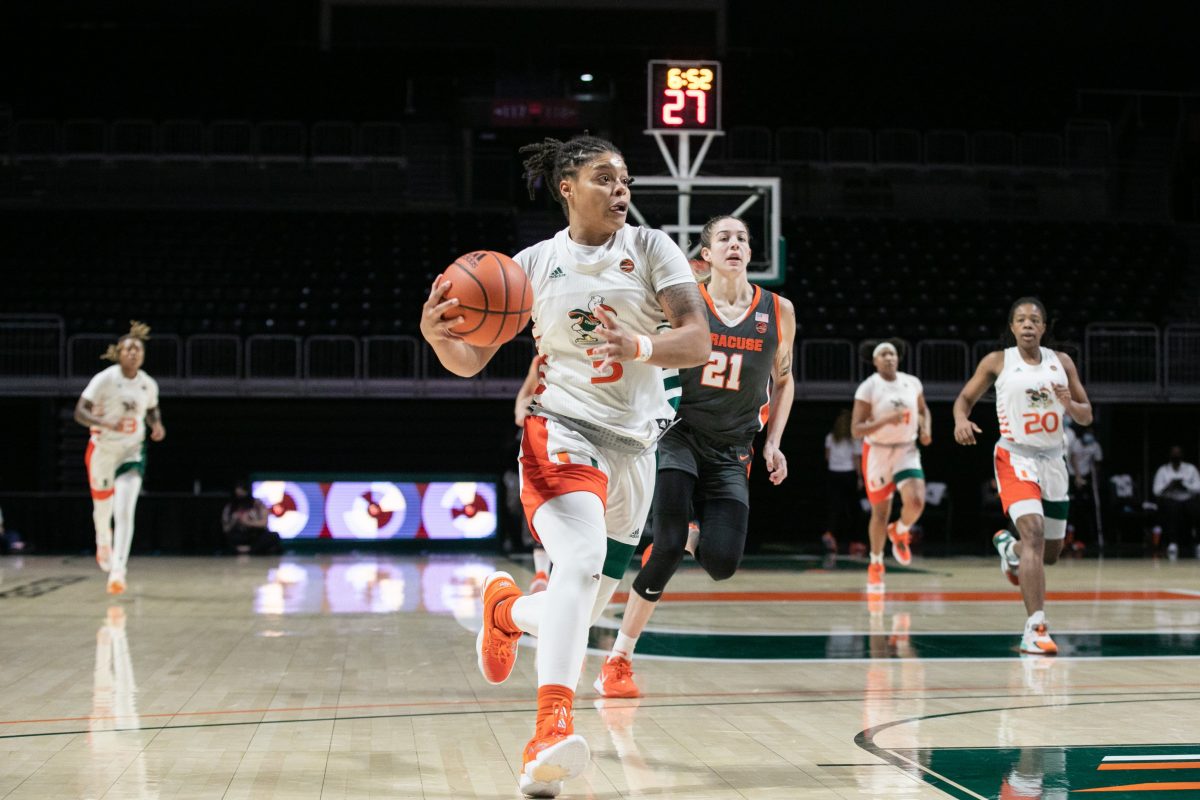 The Miami Hurricanes women’s basketball team suffered their first loss of the season Thursday night, when the Canes fell 69-58, to the No. 20/18 Syracuse Orange.

Redshirt junior Destiny Harden was the only Canes player to score in double digits with 11 points as Miami struggled to get a good offensive flow against a bigger and tougher Syracuse team. Miami freshman Nyayongah Gony also added 8 points but said that Syracuse’s length was something she wasn’t used to.

“That was definitely new because I’m usually shooting over people who are 5-foot-8 at best,” Gony said.

Miami finished the game shooting just 29.2 percent from the field and 32 percent from three-point range. The Canes also turned the ball over 20 times and were outrebounded 50-42.

“They’re huge this year. They were much tougher at the rim obviously, much tougher in the paint and we just fell down. I mean we were just like rag dolls sometimes,” Meier said. “So, we have to get back in the gym, and really work on our fundamentals but you know there is flashes of it, but you know it’s just how consistent you can be.”

Syracuse jumped out to an early 9-0 run forcing Miami to take a timeout just a few minutes into the game. Miami guard Kelsey Marshall responded with back to back three-pointers out of the timeout to help spark a 7-0 Miami run. Miami would stay close for the rest of the quarter but couldn’t get the lead as the Orange took a four point lead into the second quarter.

Syracuse started the second quarter on another run, this time a 10-2 run to take a 33-23 lead with just over 5 minutes to play. The Canes were able to cut the lead to six but a late three-point from Syracuse push their lead to 9 going into halftime.

The Orange extended their lead to 14 points coming out of halftime but a couple of late third-quarter points from Gony helped Miami cut the lead back to only nine points heading into the fourth quarter.

Just like every other quarter in this game, Syracuse started the fourth with another run this time pushing their lead from 9 points to 17 points. Harden then scored 7 straight points for Miami to cut the lead to 10 but the Orange would take control again going on a 6-0 that put the game away for good this time.

“I thought we looked really immature tonight, but I don&#39;t want to take anything away from them,” Meier said. “As a coach when you play Syracuse, you’re more so worried about the mentality of your kids and making sure they stay in it. If they take a good shot; we acknowledge it and if they take a bad one you really have to acknowledge it. The immature decisions and lack of discipline.”

The Hurricanes’ next game will be against the Duke Blue Devils on Sunday, Dec.13 at 3:00 p.m.