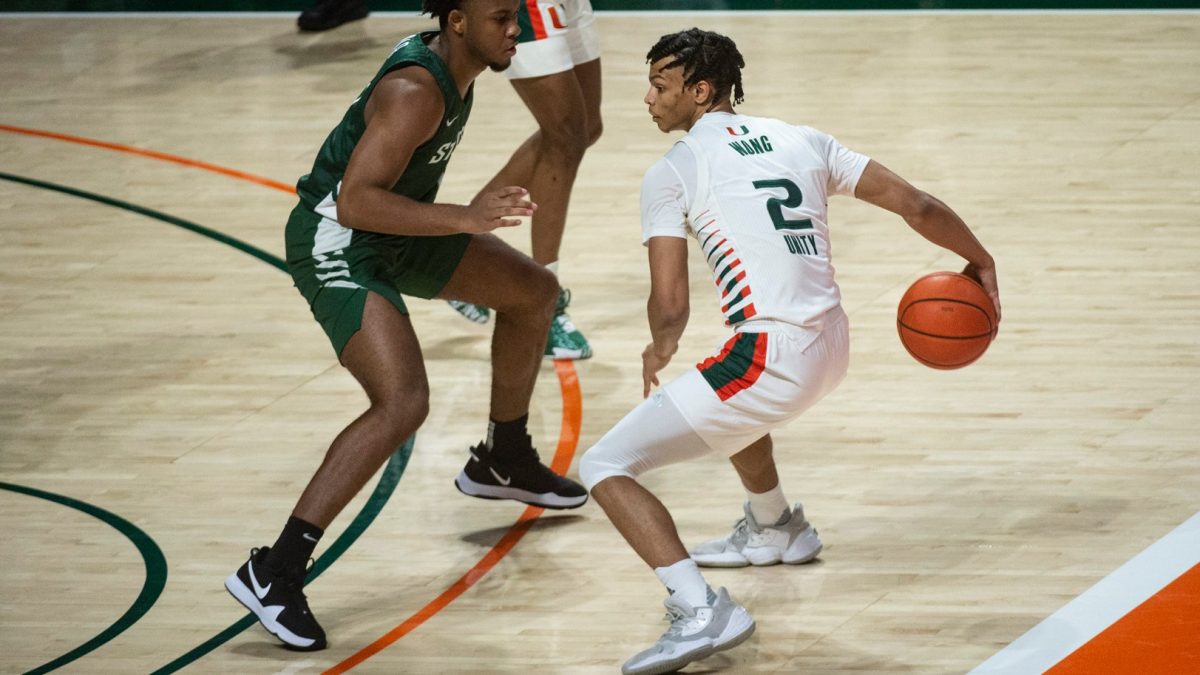 Sophomore guard Isaiah Wong recorded his second career double-double with 17 points and 12 rebounds through 31 minutes of action as the Hurricanes men’s basketball team defeated Stetson 82-60 on Friday night at the Watsco Center.

Miami pulled off its 50th all-time win over the visitors from DeLand, Florida, despite senior guard Chris Lykes leaving the game with an ankle sprain in the second half. The team’s leading scorer from last season remains questionable for Tuesday’s home game against Purdue in the ACC/Big Ten Challenge.

Miami head coach Jim Larrañaga’s team totaled 18 assists and limited turnovers to 10, while holding the Hatters to 39 percent shooting. The Canes outrebounded their opponent 49-29, with 13 of those being grabbed on the offensive end.

“I thought that was a very good game for us to play,” Larrañaga said. “Stetson plays multiple defenses and our players had to respond to each one. We were constantly making some changes offensively. But defensively, for 38 minutes I thought our defense was very, very good. We didn’t give them a lot of fast break opportunities and we guarded the ball very well.”

Wong was able to exhibit the same offensive prominence seen in last game’s performance, as well as throughout the second half of his freshman campaign.

“We always knew he was a bucket, and he’s showing it,” redshirt senior guard Kameron McGusty said. “He’s finally comfortable in our offense [and] he plays super hard on the boards. I continue to expect what you’re seeing from him throughout the year.”

Miami began the second half on a 9-0 run, which came in part because of their sharing of the ball and solid rebounding.

“First of all, two areas that we’ve really concentrated on, we did very well in. We outrebounded them, 49-29, and we had 18 assists and only 10 turnovers,” Larrañaga said. “Those categories are going to be key for us all season long.”

Stetson completed its own 9-0 run with just under two-and-a-half minutes remaining in the second frame, yet UM’s 15-2 burst beforehand had already widened the margin to 74-45.

McGusty and freshman forward Matt Cross combined for 22 points as McGusty scored seven points and Cross tallied eight, both after the intermission. Cross tweaked his ankle and headed back to the locker room late in the second half, however, but has remained productive, nonetheless.

“Matt Cross has come a huge way since his first day [of the] summer,” McGusty said. “I commend him for that. It’s hard for a freshman to come in on day one and start and actually be productive, know what we’re doing, and be up to date the way we play the offense and defense. So, he’s done a great job.”

Lykes led the scoring column with 20 points, while shooting 5-of-9 from the field and making two of his first three 3-point attempts after a subpar opening night on Saturday.

“Chris Lykes never goes 3-of-11 two games in a row,” McGusty said. “We knew he was going to bounce back.”

“We’re going to have to work on the zone [defense],” Larrañaga said. “We had very long, athletic guys out there, but their 3-point shooter, especially Johnston, really caught fire in that last two minutes.”

The Canes were not as consistent offensively as they hoped, as it was more of a game of runs. Miami went nine minutes without a field goal in the second half.

“I was very concerned in the second half,” Larrañaga said. “It looked like we couldn’t get it going after that first burst where we got ahead by 20, and then we kind of had a lull for a while.”

Miami eventually pulled away in spite of Stetson’s late 3-point field goal onslaught from redshirt freshman guard Chase Johnston, who finished with 19 points on 5-of-10 shooting from the 3-point line.

“They made some threes that got them back in the game and then we finished very well,” Larrañaga said. “Basically, we were ahead by double digits the whole game.”

The team’s newest center in senior Nysier Brooks, a Cincinnati transfer who sat out due to NCAA requirements last season, contributed eight points and just as many rebounds.

“Since he’s been in college at Cincinnati, he’s always been a guy that has a presence down low,” McGusty said. “So, he always helps us get on the same page on the court. It’s always good to have a guy that talks a lot and gets everybody set up.”

With another double-digit victory behind them, Larrañaga is just eight wins away from his 200th win at UM, having also entered the game with the 10th most victories of any current Division I coach.

The Hurricanes will host Purdue (3-1) on Tuesday at 5:00 p.m. in the ACC/Big Ten Challenge. The programs have not met since November of 2011 when the Canes lost 76-65. The game will be televised on ESPN2.