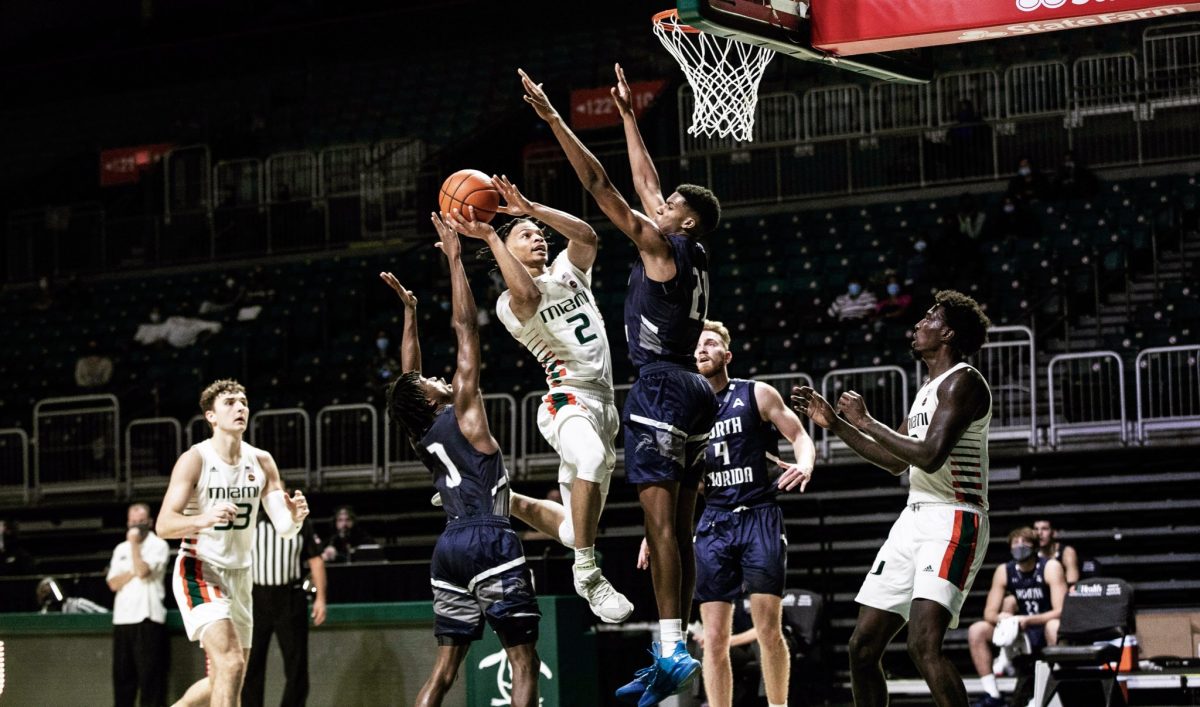 After an offseason unlike any other, the Miami Hurricanes finally returned to the hardwood of the empty Watsco Center for their first game of the 2020-2021 season.

The Hurricanes jumped out to an early 11-0 lead in the first quarter, but after giving up nine three-point shots to the Osprey in the first half, Miami only led 42-34 at halftime.

“Once we were able to get control of the game early, I thought we relaxed defensively,” Miami head coach Jim Larrañaga said. “We gave them way to many threes.”

North Florida was able to pull within three points of the Hurricane at the start of the second half, but a 10-0 scoring run with four points from both Kameron McGusty and Matt Cross helped give Miami a comfortable lead.

McGusty, a redshirt senior, and Cross, a freshman from Brewster Academy, scored 10 points each. Sophomore guard Harlond Beverly recorded a double-double, with 11 points and 11 rebounds, a career-high in rebounds. Senior guard Chris Lykes, UM’s most recognizable and high-profile player, scored 11 points and went 3-13 from field goal range and 2-6 from the three-point line.

As a team, Miami shot 40.6 percent from field goal range, 25 percent from 3-point range and 70 percent from the free throw line. Larrañaga criticized his team for both poor 3-point shooting and defense.

“It’s very hard for me to understand, I’ve coached a very long time, I’ve used the same 10 commitments, practice them every day and the first is to get back and set the defense,” Larranaga said. “Yet, despite all the emphasis since July, and all of last year, for some reason, our guys have yet to understand that is how you become a good team.”

Prior to the start of the game, it was announced that four-star freshman guard Earl Timberlake will miss three to five weeks due to a right ankle injury suffered in practice. A 6-foot-6, 215-pound freshman, Timberlake averaged 16.5 points, 10.0 rebounds and 4.0 assists per game as a senior at DeMatha Catholic (Md.) High School last year.

Miami will next play its reschedule game against Stetson on Dec. 4 at 2 p.m. at the Watsco Center.