Nine seasons in, Jim Larrañaga looks to make the 10th even more successful 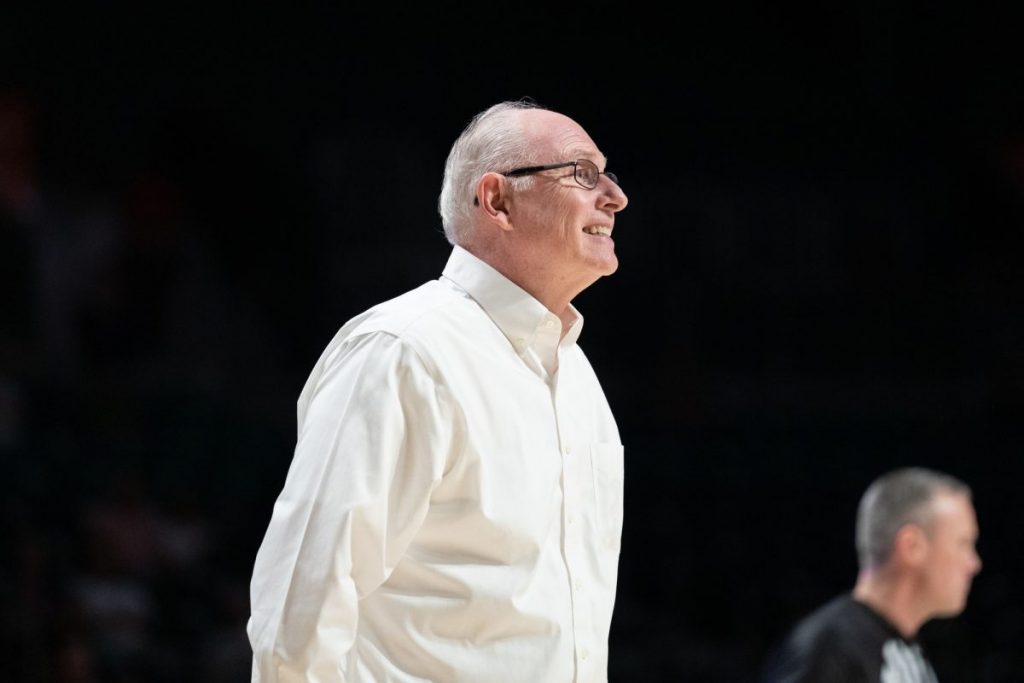 He is considered by many to be UM’s most heralded leader of its men’s basketball program.

He pushed the No. 25 Miami Hurricanes to a blowout victory over the No. 1 Duke Blue Devils for the first time in program history while “Storm Surge,” the arena’s student section, flooded the court. He even cut down the net in Greensboro, N.C., after winning the 2013 ACC Tournament with a team that was not ranked nationally until mid-January.

It’s three straight sold-out seasons at what was formerly the “The BUC” (Bank United Center) and now “The Wat” that may not have materialized had he not led the program to an ACC title and the Sweet 16 twice, not to mention being honored as ACC Coach of the Year twice in four years.

After what has already marked ten seasons in Coral Gables, Fla., it is almost without a doubt that the Hurricanes men’s basketball head coach Jim Larrañaga has achieved success in leading what has historically been a football-dominated school back to prominence at the national level. Prioritizing an environment of “attitude, commitment, and class” has not wavered either, despite the regained attention.

“Over the last four years Coach L has had a major impact on how I view things in life,” Miami senior guard Chris Lykes said. “He was just talking to me during quarantine and letting me know that he was thinking of me and all the good things that we’re gonna do this upcoming year. His faith is definitely in the right place, it always has been. I’m grateful that’s somebody I can look up to.”

Lykes, a former four-star recruit and the shortest starter in any high-major program last season, has been heavily preparing in the preseason after serving as the team’s leader for the past three years, averaging 15.4 points per game last season.

“He’s playing the best basketball in practice,” Larrañaga said. “Will it convert to games? I sure hope so because he’s had a great summer and fall and that was after knee surgery. So, he came back very strong, he rehabbed the knee, got himself in great shape, he’s playing very, very well.”

Senior center Nysier Brooks, who sat out the 2019-2020 season due to transfer requirements, already feels strongly impacted from Larrañaga’s guidance and support.

“He’s helped me get better at trying to make the best out of each situation,” Brooks said. “Grab the positive stuff out of it and just leave the negative stuff where it’s at. If I know that I missed like a shot or two or something, I just need to work on that shot a lot more.”

Many UM students, like senior Austin Pert, a sports writer for The Miami Hurricane, have embraced Larrañaga’s empowering reach to the school’s community.

“There is no doubt that Larrañaga has energized the program,” Pert said. “Both on the court and off, there is a visible juice that wasn’t present under Frank Haith.”

Larrañaga has installed a grit into his players, allowing them to think they can beat anyone in the country, including blue bloods like Duke, North Carolina and Syracuse.”

Off the court, Larrañaga has been able to trace his own trail from a player recruitment standpoint, reeling in players mainly from the Northeast, where a chunk of talent ferments in states like Massachusetts, New York, Pennsylvania, and Washington D.C.

“Unlike football and baseball, there isn’t a gold mine of basketball talent right here in South Florida,” Pert said. “That’s not to say that there aren’t any good local prospects, but the cupboard is drier than in other sports.”

With the national impacts of the Black Lives Matter movement intertwined with this year’s need for voter registration, Larrañaga was even able to step up and help spearhead the basketball program’s very own initiative.

“Equally important, he’s given the program and his players a voice to speak out on contemporary issues,” Pert said. “Larrañaga led a “Get Out the Vote” march on campus featuring his players and has been vocal on perspectives that are important to members of the program.”

And Miami women’s basketball head coach Katie Meier could not have been any more supporting of the need for social change.

“In the history of any type of social injustice in our country, it’s been a lot on a college campus,” Meier said. “It’s been the movement, the energy, the ideas, and we’re talking basic human rights here. We are pro-human rights at this university and there’s nothing else to it.”

But with all respect to the unique and meaningful influence the Bronx, N.Y., native has had on various players—many of which that have played professionally—the time has come once again for Larrañaga to rally his troops towards success in the conference.

“I would say as long as we stay healthy, we should be in much better shape than we have been in the last two seasons,” Larrañaga said. “But it is a big blow to us to lose Sam [Waardenburg], I will say that. He’s our leading returning rebounder, he’s our best frontcourt defender, he’s a fifth-year senior, so we’re going to miss his leadership.”

Larrañaga stated that filling the void of the New Zealand native, who will be sidelined for approximately six months, will require a younger or less experienced player to do so. With added depth to the roster, that could be freshman guard Matt Cross, sophomore forward Anthony Walker, or even redshirt junior Deng Gak. A native of Sydney, Australia, Gak has sat out the last two seasons with left and right knee injuries, in addition to redshirting his freshman year.

The program’s student-athletes are more than up for the challenge after two consecutive losing seasons without an at-large NCAA Tournament bid and a pair of early exits in the ACC Tournament.

“I always believe that we can go all the way,” Lykes said. “Every team I’ve played on, I feel like we could go all the way. It’s just a matter of staying healthy, which we’ve seen in the past couple of years, and just sticking to it. We’re gonna be alright this year, we’re just gonna have to focus and keep trusting.”

When asked about the team’s added depth, redshirt senior Rodney Miller knew, at last, having a deeper rotation could be the remedy to have an improved chance at re-established ACC success.

“I feel like that’s been a question that we’ve had for the past couple years I’ve been here because we’ve been plagued with injuries and eligibility issues,” Miller said. “This year seeing all of these faces in practice is almost brand new to me. We have a stockpile of guys and it’s gonna be huge for us. We expect a lot out of everybody, not just the upperclassmen because we got a lot of seniors, but the seniors are here to teach the freshmen, so they could produce early.”

Pert, on the other hand, acknowledges that the team’s mental toughness remains just as vital as the number of players suiting up on any given night.

“Larrañaga just has to get this team to believe,” Pert said. “Believe that they can beat anyone placed in front of them on a given night. The Canes have wins over Duke and UNC in fairly recent memory. Over the past few seasons, Miami hasn’t been close to beating Duke. The Canes need to believe that winning those games is doable if they want to be a tournament-type team.”

The program’s two freshmen, two four-star recruits in Cross and Earl Timberlake, have already made their strides in preparing for a season where the Canes will actually be able to scrimmage five-on-five in practice.

“Earl has practiced very hard and very well,” Larrañaga said. “He’s a tremendous competitor. He brings an entirely different set of athletic skills and basketball skills. He’s more physically ready than most freshmen, he’s more like a Bruce Brown in a sense that he’s 6-foot-5, he’s strong, he’s athletic, he can handle (the basketball). Whether Earl starts or comes in off the bench, he’s going to be a major contributor from day one.”

Though Miami was nationally ranked at No. 24 in scoring defense (64.1 points per game) in 2017, the team’s defense has lacked over the past couple of seasons. The Canes finished in the cellar of scoring defense in the ACC in 2020, ranking 14th and allowing 73.2 points per game to teams like Duke, North Carolina, and Louisville.

“It’s not the offensive end, it’s who’s gonna bring it defensively,” Larrañaga said. We’ve been perhaps the worst defensive team in the ACC the past two seasons. Some of it has to do with our lack of depth, some of it just has to do with not being quite as big and talented as we’ve been in my previous seven seasons.”

But preparing for yet another hoops season at the “U” while the school’s athletics department endures the adverse effects of a global pandemic has been anything but a breeze for Larrañaga. The former Final Four coach at George Mason has maintained an optimistic, yet cautious attitude towards practices.

“I’m very proud of our guys for the way they’ve handled it so far, but we’ve almost been in our own bubble,” Larrañaga said. “Our practice facility’s been limited to our players, our coaches, and a couple of managers, and that’s it. And they’ve all been tested. At one time it was once a week, now it’s twice a week.”

In terms of how the team will handle their daily functioning during the season, Larrañaga said complacency has no place in the locker room.

“It’s a very dangerous virus,” Larrañaga said. “Our players have been very smart dealing with it so far, but you can’t let up your guard especially with there being more and more cases diagnosed each day and instead of this going away, it’s getting worse and we want to keep ourselves safe so we can really have a basketball season.”

“I’ve lost a friend to COVID-19, I’ve lost a former player to COVID-19, and I have a relative with COVID-19,” Larrañaga said. “We need to be very diligent and be on our toes throughout this entire school year.”

With an experienced coaching staff, a deeper and more talented roster filled with both veterans and younger talent, the Hurricanes could be on the verge of storming through the conference with their robust work ethic and environment of trust.