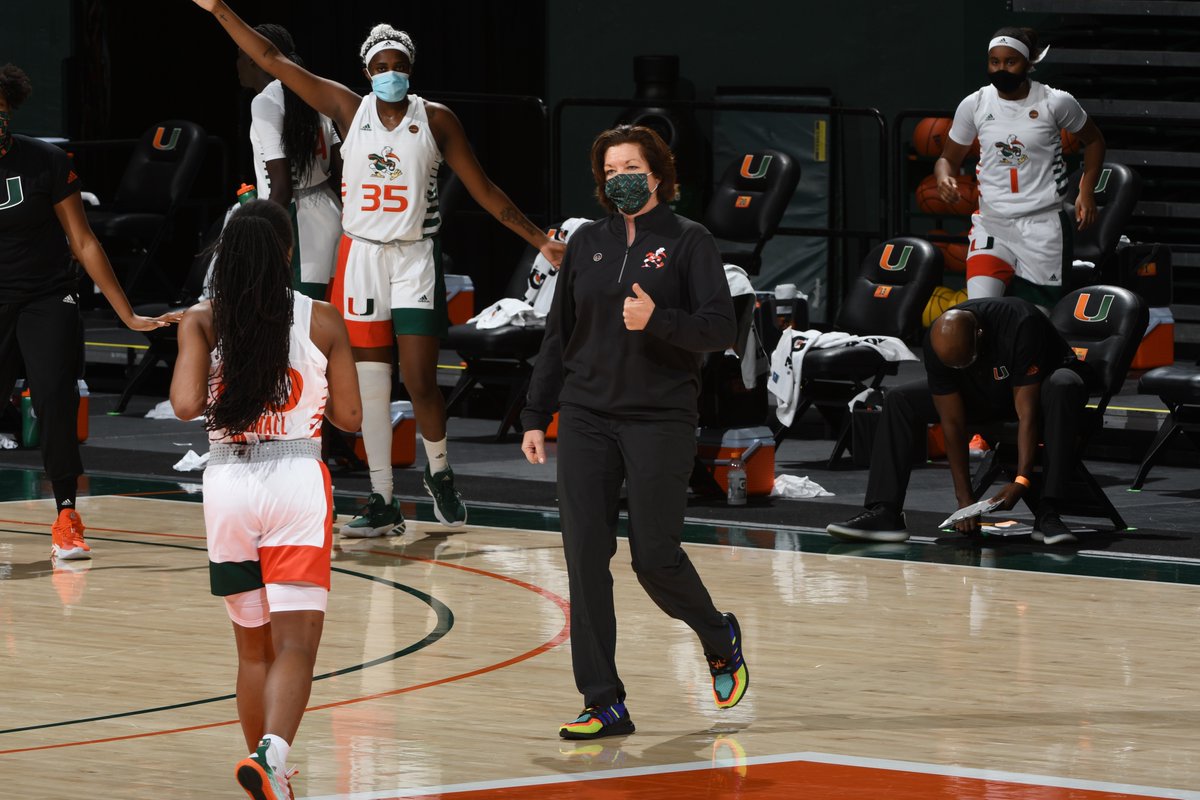 In their first non-conference game of the season, the Hurricanes women’s basketball team was able to begin their 2020-21 season with a win against Jacksonville.

Despite the risk of Covid-19 and missing starting guard Mykea Gray due to a season-ending ACL tear, Miami was able to rally off a 16-point victory Wednesday afternoon in Coral Gables.

“The first five minutes were not fun to watch,” Miami head coach Katie Meier said. “I like that we kept the faith and we worked through some lineups and got a little spark off the bench when we put in Naomi [Mbandu] for a little bit there and that’s a big job for her. The encouraging thing I think for us is that the shooting percentage per quarter just kept going up.”

The Hurricanes went on a 14-4 run to start the second half, after only leading by six points at the intermission. Emerging for the Canes was redshirt junior guard Destiny Harden, who scored a career-high 16 points while grabbing 13 rebounds and tallying four assists through 29 minutes of action.

“Coach just put a game plan in and we just sticked to the game plan,” Harden said. “She called a play for us [which] gave us the middle that was wide open with a 2-3 zone. [It was] just trying to get some high-lows or a nail jumper, so I just think I tried to put our team together and tried to get the open looks.”

Miami shot the lights out from the perimeter, converting on 18 3-point shots but allowed 40 points in the paint with 38 of them being layups.

“I don’t believe that I’ve ever coached a team that’s given up so many points in the paint,” Meier said. “Especially on a team [where] they weren’t huge. 40 points in the paint out of the 58 that they scored. So, you’re talking about 80 percent of their points felt like they were in the paint. It’s just an effort that we’ve got to clean up on.”

Harden’s six points in the fourth quarter helped Miami pull away, despite Jacksonville scoring nine points in the final one-and-a-half minutes to cut the lead to 74-58.

“I’m happy to get the win,” Meier said. “I think Destiny Harden is gonna be a real story for us this season, and she just played a phenomenal game.”

The Canes will nonetheless miss their floor general in Gray this season, as the team tries to soldier on without their most experienced guard. The Upper Marlboro, Md., native started all 30 games last season while receiving ACC All-Defensive team honors. Miami was also without Karla Erjavec, Paula Fraile Ruiz, Sydnee Roby and Kenza Salgues.

“We run a ball-screen offense,” Meier said. “That’s what we do. So, we don’t have that now and it’s a huge adjustment offensively, as you can see. We need some more time to adjust to it. We do have some length and we’re gonna have to pass over the top a little bit more. I thought Taylor [Mason] is trying to do her best, but Taylor went 2/11 because I was coaching her up and trying to get her in the paint and she missed a few and had a couple of turnovers.”

With their first win of the season in the books, the women’s team has two days before their next game against North Florida at home on Saturday. That game will be the second of four non-conference games all played at home, before beginning ACC play against Syracuse on Dec. 10th at the Watsco Center.