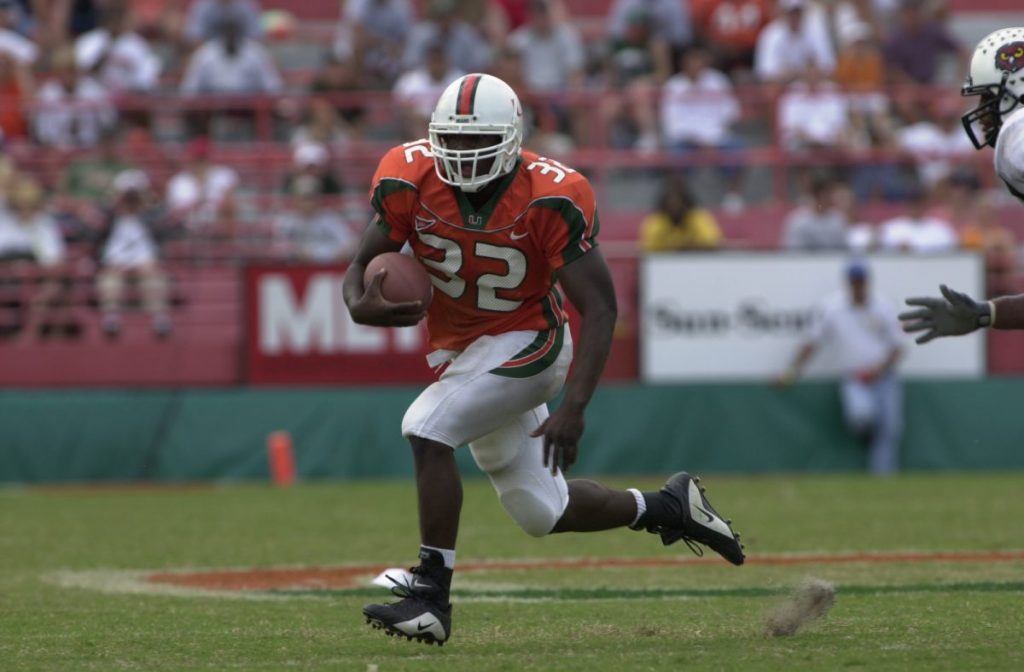 Running back Frank Gore rushing during the 2001 football season. Gore rushed for 61 yards, and a 3rd quarter touchdown for the Jets on Sunday, Nov. 23. Photo credit: JC Ridley/Caneshooter.com

With the Thanksgiving Holiday upon us, Week 11 saw both conferences’ playoff races begin to heat up. Close divisional and wild card standings are starting to be looked at ever more closely, and each game seems to matter just a bit more for many teams. Meanwhile, other teams are looking merely to stay alive or even get a single win before turning their collective focus to 2021.

The New York Jets fall into the latter category, currently sitting at 0-10 after falling 34-28 at the Los Angeles Chargers. Running back Frank Gore was impressive again however, rushing for 61 yards and a third quarter touchdown on 15 carries, while catching two passes for 10 yards.

Tight end Christopher Herndon caught two passes for 32 yards including a six-yard touchdown reception late in the contest to keep the Jets alive. Braxton Berrios also had four returns for 76 total yards, including a long of 28 yards.

On the other side of the field, Chargers safety Rayshawn Jenkins had a team-high seven tackles.

Linebacker Denzel Perryman added three tackles as well as the only sack LA had on Jets passer Joe Flacco. Kicker Michael Badgley was also 2-2 on field goal attempts, including a long from 44 yards, as well as making all four extra points.

The Cleveland Browns are one of those teams in the playoff hunt, for the first time in seemingly a generation. They sit at 7-3 after a 22-17 home win over the Philadelphia Eagles. Defensive end Olivier Vernon made life tough for Eagles quarterback Carson Wentz, sacking him three times while recorded 3.5 total tackles for loss and five tackles overall. Safety Sheldrick Redwine also made a tackle.

Running back DeeJay Dallas logged a 13-yard carry while catching two passes for 19 yards. Tight end Greg Olsen meanwhile caught as many balls for 20 yards as the Seahawks won 28-21 over Arizona at home.

Texans running back Duke Johnson got the ball in both the ground game and aerial attack as Houston beat New England at home 27-20. He had ten carries for 15 yards on an afternoon the Texans handed the ball off just 13 times, while catching three passes for 20 yards.

Falcons defensive end Allen Bailey made two tackles and a half sack in a 24-9 losing effort at New Orleans. Al-Quadin Muhammed—also a defensive end—made one tackle for the Colts on their way to a 34-31 overtime home win over Green Bay.