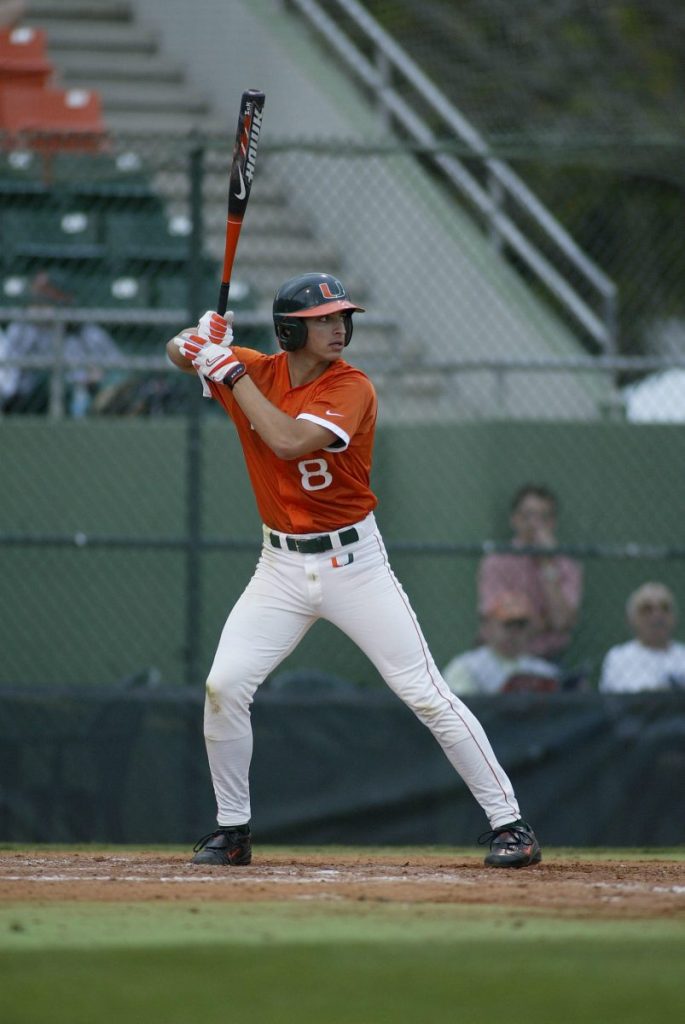 Since the establishment of the Hurricanes baseball program in 1940, the program has had a remarkable reputation of being both a consistently successful team at the college level and a powerhouse for developing prospects into major league talent.

In program history, dozens of players have found themselves receiving the call from professional clubs to take their skills from Coral Gables to the biggest stage of the game, but few alumni have stood out from the others. Below is a ranking of the greatest baseball players to go through the University of Miami en route to the big leagues, ordered by the value of their career achievements and their Wins Above Replacement (WAR) statistic.

Aubrey Huff was selected by the Tampa Bay Devil Rays in the fifth round of the 1998 MLB Draft and saw a strong career reach its peak towards the end of his prime.

From 2000 to 2005, Huff was a starter for the Devil Rays and was one of their best offensive players, reaching over 20 home runs four times in that span and surpassing the 100 runs batted in threshold twice.

However, the accolades didn’t begin to stockpile for Huff until his 2008 season with the Baltimore Orioles. During a season in which he hit 32 home runs and recorded a career high 108 runs batted, Huff was named the Outstanding Designated Hitter of the Year and a Silver Slugger.

After his three seasons with Baltimore, Huff found a home in San Francisco with the Giants. In his tenure with the Giants, Huff was a part of two World Series Championship teams in 2010 and 2012.

With the Canes, Huff was one of former UM head coach Jim Morris’s elite offensive players and was part of a core that dominated their opposition. In his two seasons with Miami, the Hurricanes went 102-30 and set school records in runs batted in, home runs and slugging percentage while averaging 10 runs per game.

Huff was inducted into the UM Sports Hall of Fame in 2009.

Charles Johnson, a late first-round draft pick in 1992 by the Florida Marlins, was integral to the beginnings of professional baseball in South Florida and remains one of the signature names and faces of the Marlins’ two championship teams.

The backstop from Fort Pierce, Florida made his debut with the Marlins in 1994 and truly blossomed. Renowned for his defense in his early years, Johnson collected three consecutive Gold Gloves between 1995 and 1997, a year in which he also became an All-Star and World Series Champion.

Midway through 1998, however, Johnson was flipped to the Los Angeles Dodgers, where he collected his fourth Gold Glove. Throughout the second half of his career, Johnson saw split time with numerous teams, which included a brief stint with the Baltimore Orioles and the Chicago White Sox, a return to the Marlins, two seasons with the Colorado Rockies and one with Tampa Bay.

A two-time Golden Spike finalist and First Team All-American member with the Hurricanes, Johnson was inducted into the UM Sports Hall of Fame in 2002.

Alex Fernandez — despite lacking the hardware of many of the players on the list — quietly compiled one of the steadiest and strongest careers to ever come out of The U.

The Chicago White Sox’s first-round pick made his debut shortly after being drafted and would play in the South Side of Chicago for seven of his ten professional seasons. In his final three, he returned to South Florida and won a World Series Championship with the Florida Marlins.

Despite cutting his career shorter than most players of his caliber, Fernandez’s WAR of 29.5 is third-highest of all Hurricanes alumni and the highest among pitchers. By the end of his career, he had a win-loss record of 107-87 and a strong career earned run average of 3.74.

As a Hurricane, Fernandez made an immediate impact as one of the most highly-touted pitching prospects in the country. In his 1989 freshman season, he threw eight complete games, three shut-outs and a no-hitter to lead the Canes to the College World Series. While they ultimately fell short, Fernandez’s regular season efforts were good enough for him to be named a First Team All-American, a Golden Spikes finalist, and the winner of the Collegiate Baseball Freshman of the Year award.

Fernandez was inducted into the UM Sports Hall of Fame in 2015.

Big-time hitter Greg Vaughn was selected by the Milwaukee Brewers with the fourth overall pick in the 1986 MLB Draft and made his debut in 1989, thus beginning a 15-year career that would see him play for five different teams.

In an outstanding 1998 campaign, Vaughn clubbed 50 home runs and was named the MLB Players’ Choice National League Comeback Player of the Year and a Silver Slugger.

Long-time Milwaukee Brewer Ryan Braun has not only accumulated the best statistical career of all former Hurricanes in Major League Baseball, but he also boasts one of the most accomplished career resumes of all active players.

While it is easily forgotten after his lengthy 14-season career, Braun was a breakout superstar for the Brewers and won Rookie of the Year after being selected in the first round of the 2005 MLB Draft. Since then, he has grown into a six-time All-Star, a five-time Silver Slugger, a league MVP and the face of the Brewers’ franchise for over a decade.

Throughout his professional career, he has a cumulative WAR of 46.7, which is the highest all-time for Hurricanes alumni and by a large margin; Greg Vaughn currently holds the second-highest career WAR and it is roughly 16 points lower than Braun’s at 30.8.

During his time with the Canes from 2003 through 2005, he was named the National Freshman of the Year, a Golden Spikes Award finalist and the 2005 ACC Player of the Year in addition to being named to numerous All-American teams.

In 2017, Ryan Braun’s name and legacy was forever immortalized in university history with his addition to the UM Sports Hall of Fame.

Miami in the NFL Week 10
Thank you, Alex Trebek: A tribute to the late ‘Jeopardy!’ host