Home » “On the brink” of not playing, short-handed Hurricanes come back in fourth quarter to beat Virginia Tech

“On the brink” of not playing, short-handed Hurricanes come back in fourth quarter to beat Virginia Tech 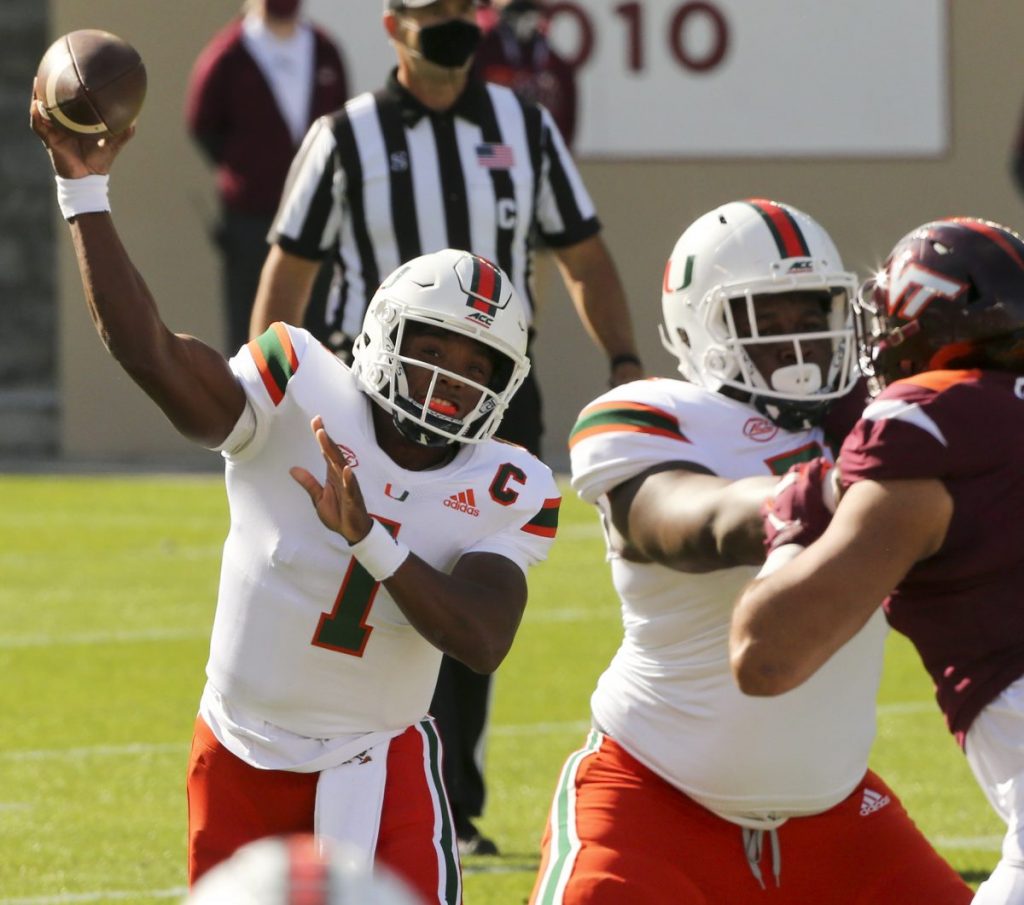 For the third straight week, the Hurricanes managed to execute a fourth quarter touchdown drive and grind out a win, this time over Virginia Tech.

With Covid-19 threatening to cancel or postpone the game, Miami, with 13 unavailable players, came together and found a way to overcome an 11-point deficit with a 25-24 victory Saturday afternoon in Blacksburg, Virginia.

“We we’re on the brink,” Miami head coach Manny Diaz said after the game. “The players attitude was the most telling. They wanted to play and we were right on the brink at some position groups. It makes it hard to practice, it makes it hard to do anything. We brought the team and the players came here to win the game. I thought they won the game on Friday with all the things they had to go through this week.”

Once again, it was Miami quarterback D’Eriq King who led the Hurricanes on a late-fourth quarter drive that resulted in the go-ahead touchdown. Down 24-19, King and company marched 82 yards down the field and capped off the drive with a 36-yard touchdown pass to Mark Pope.

King finished the game completing 24 of 38 passes for 255 yards, one passing touchdown and 69 rushing yards with one rushing touchdown. Pope had the only receiving touchdown of the game while receiver Dee Wiggins led Miami with 106 yards on eight receptions.

I think it is a testament to everything we do,” King said post-game. “This team is a fourth quarter team. Finding ways to win, it’s big. It was a rough week for us, we didn’t know if we were going to play.”

Miami’s defense also did it’s part late in the game and held Virginia Tech to zero points from the six minute mark of the third quarter to the end of the game. A major contributor to the strong defensive stand was sophomore cornerback Te’Cory Couch, who recorded an interception in the fourth quarter, the first of his career.

“Te’Cory is getting comfortable making plays on the field,” Diaz said. “He’s playing as good as anyone we have in the back end right now.”

Defensive end Jaelan Phillips was another major contributor on the defense, with four solo tackles, 4.5 tackles for loss, 2.5 sacks.

For most of the game, Miami’s offensive line was struggling to protect King and surrendered six sacks, while the defense got off to a slow start. But they held it together and for that, Diaz is immensely proud of his team.

“I’m so proud of them. Week in and week out, all the adversity they face, they play for each other so hard. Sometimes you are not going to have your a game and sometimes you have to find different ways to win games. And we did it. All the credit goes to the players, they’ve earned what they’ve got, every bit of it.”

Of the players unavailable for the game due to Covid-19 and contact-tracing, three of the 13 — offensive lineman John Campbell and Jakai Clark and middle linebacker Zach McCloud — were starters. Rotating defensive tackle Jared Harrison-Hunte and Jahfari Harvey were also unavailable.

Each starting offensive line, which included Ousman Traore, who hasn’t played a lot this season, played all 86 snaps. There wasn’t a lot of substitution on the defensive side either, something the players felt.

But that wasn’t a problem for the Hurricanes, whom are used to the difficulties that come with playing a lot of football at a fast tempo.

“I think our tempo offense, what we are doing in weight room, we’ve seen teams wear down with our tempo and not be able to hang,” Diaz said. “We are certainly able to maintain our energy level for 60 minutes.”

Now at 7-1 (6-1 ACC), the Hurricanes chances at making the ACC Championship are still alive and it will likely come down to the results of the other teams in the conference.

Miami will return home next to face Georgia Tech on Saturday, Nov. 21 at 8 p.m. at Hard Rock Stadium.