No pass/fail grading option for fall semester as of now 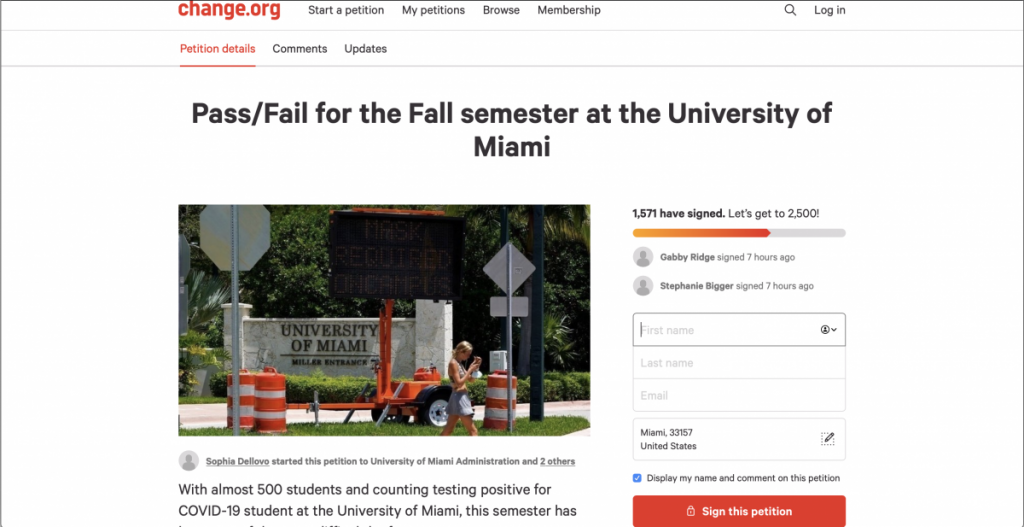 The University of Miami responded to students’ concerns about not having a pass/fail option for classes this fall. On Oct. 27, UM decided that there will be no changes and students will not have the option available this semester.

A two-page letter from the university’s Office of the Provost stated its understanding that spring 2020 endured changes never seen before, specifically the swap from in-person classes to completely virtual classes. Because of this switch, the option of a pass/fail grade in action to grade scale was introduced last semester. Students have argued in online petitions and at senate meetings that a pass/fail option should be provided because of the continued disruptions in academics.

A petition on change.org started by a UM student surpassed 1,500 signatures advocating for a pass/fail option.

“Allowing students to choose courses to count as pass/fail or full credit would greatly allow students to salvage the GPA they worked so hard for without being punished by the vast emotional, physical and mental consequences of COVID-19 in this 2020 school year,” the petition reads.

The petition argued that the two week displacement periods for possible exposure, 10 days of isolated quarantine for those who did test positive and the constant threat to the students’ and professors’ health should be enough to warrant a pass/fail option.

Tuana Yazici, a junior majoring in politics, philosophy and economics, has taken this initiative as her own. Yazici is the College of Arts and Science Senator on Student Government, a Student Government Representative for the Faculty Senate and Chair of Academic Affairs. She says she has spent countless weeks trying to get this option passed for all UM students.

“This was a huge concern that many people brought up and wanted to see someone work on it,” said Yazici.

Yazici took on this project and reached out to the faculty senate. Shrey Patel, the Speaker Pro Tempore of the Senate, wrote the formal proposal along with Yazici. After submitting her proposal, faculty told her she needed support from administration.

“Even though faculty senate were lenient towards helping with this, they said that in the end the Provost Office decides,” Yazici said.

Yazici began sending emails back and forth on Sept. 25 with Patricia Whitely, the university’s Vice President for Student Affairs, to set a meeting time with the Office of the Provost. On Oct. 27 she was able to sit down and have a discussion with Whitely and Jeffrey Duerk, the university’s executive Vice President for Academic Affairs and Provost. The meeting ended with a two-page letter to provide to the student body.

“All agree that because we have not faced a major, unanticipated disruption like we did in spring, we are unable to justify a credit/no-credit option for the fall semester,” the letter said, “We do not believe it is in a students’ or the university’s best interest to have back-to-back semesters of CR/NC [credit/no credit] on your graduation transcripts.”

Some students around campus were disappointed after reviewing the letter.

Kenneth Warren, a freshman majoring in ecosystem science and policy, hoped that UM would allow for students to choose a pass/fail option. Some students, like Warren, believe not having the pass/fail option shows the need for change in academics.

“The university did not use this opportunity and say we understand Covid-19 has created a tremendous amount of pressure for students, for its communities, for our homes, and in response to that pressure, we decided to make a change that enables students to showcase who they are as opposed to what they do,” said Warren, “and that’s why I’m disappointed.”

Yazici is still hopeful for the future.

“They’re not saying straight up yes or no to this proposal,” Yazici said. “We don’t know how long the pandemic is going to last; it’s obviously going to be next semester as well but it could also be the summer semester and fall as well. What they’re being careful about is if they offer credit/no credit for almost two years, that also affects how credible our academics are at the university.”

The Office of the Provost did not outwardly state that this option will never be passed in the future and stated that they will continue to monitor the situation in the fall semester as it continues.

“The reason I’m doing this is for the entire student body which obviously very much needed this during this time,” Yazici said. “I’m still pushing even though I’m not going to use this option.”

“A lot of my friends went to the hospital and family members died from Covid-19; there are a lot of factors which should not be looked upon lightly, and the administration isn’t looking lightly on it either as they brought up the incomplete option,” Yazici said.

The incomplete grade option allows a student extra time to complete work for a course due to unusual circumstances that will be reviewed on a case-by-case basis. Faculty may submit this temporary grade (I) on the condition that the student has completed at least half of the coursework, has a passing grade, discussed with the faculty member on the work needing to be submitted no more than one year from the date the incomplete grade is submitted.

The incomplete grade option allows for students who are struggling during a specific period during the semester to have more time to tend to their struggles and have the time to study for an exam or write a paper.

Although not an option yet, Yazici urges students to speak to their deans and advisors if they feel they have a special case in which they are not able to complete their schoolwork on time. These administrative officers look into case-by-case studies to try to best accommodate the students’ hardships.

“People live through these problems, but they don’t say it to the right people or to the right sources,” Yazici said. “Making sure that people do that is very important.”