Home » It took fourth quarter fireworks under Friday night lights, but the Hurricanes stole a win

It took fourth quarter fireworks under Friday night lights, but the Hurricanes stole a win 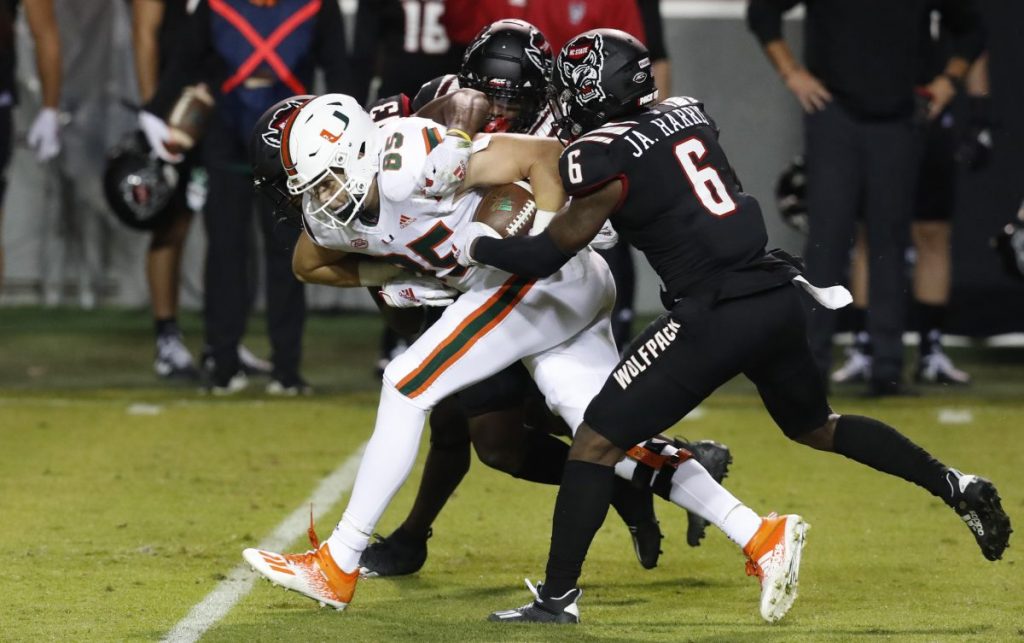 Things didn’t look good for the Miami Hurricanes Friday night. It appeared the program was destined for another disappointing road loss against a middle of the pack Atlantic Coast Conference team. They trailed by 10 points at the North Carolina State Wolfpack, with their conference title game hopes about to slip away. The Canes looked set to drop to 0-5 off bye weeks in the Manny Diaz era.

“At halftime, we were on the ropes, and the leadership of this team came into the locker room at halftime and calmed everybody down,” said Diaz. “We came into halftime. We regrouped. We knew it still wouldn’t be easy in the second half. We knew there would be adversity in the second half, but we knew we’d win the game if we stuck together, and that’s exactly what we did.”

But UM (6-1, 5-1 ACC) played to near perfection in the final 15 minutes. They got points when they needed points, and they got stops when they needed stops. There weren’t any finesse analytics that could describe the moment. Only grit and deamination powered Miami to the finish line in a 44-41 road win.

Miami shot themselves in the foot Saturday over and over again on the penalty front. They gave the Wolfpack 101 free yards on 12 total infractions. It was especially bad in the first half, when they committed eight fouls for 77 yards. The second half was somewhat better, with just four penalties and 24 yards surrendered.

“We were just not giving ourselves the chance to win the game,” said Diaz.

Most frustratingly, Miami was called for three personal fouls. It’s one thing to get called for fouls when making an effort in plays, but these unsportsmanlike conduct calls are completely controllable. And this has been a repeat issue all season.

The most frustrating call of the night came on a 4th & goal at the one-yard line, when the Hurricanes were looking to tie the game at 41 in the fourth quarter. But offensive lineman Jarrid Williams jumped early, and UM had to settle for three points and wait another drive to escape being down.

King shines under the lights

The deep ball was one question mark surrounding Miami quarterback D’Eriq King. But when he was given time to throw, as he was for much of the game, he shined. King threw for 439 yards and five touchdowns while completing 31 of his 41 passes.

“What D’Eriq King did tonight was phenomenal. Throwing for 430 [yards] and running for 105 [yards], that’s absolutely remarkable and was at his best when his best was needed,” said Diaz.

Several of his touchdown passes were absolute dimes into end zone coverage. For a receiving corps that had been challenged in recent weeks, they put up video game-like numbers.

King spread the ball around to seven total targets. Mike Harley led all pass catchers with eight receptions and 153 yards. He also caught two scores, including a 54-yarder that put UM ahead for good in the closing moments. Dee Wiggins, Mark Pope and Will Mallory also had seven, six and six receptions respectively, for a combined 252 yards.

“To have Mike Harley go for 153 and to make the play right there at the end, that’s what you want your seniors to do. You want them to make those plays. He’ll remember that for the rest of his life,” said Diaz.

“The four years I’ve been here, we’ve had some hard battles and didn’t come out with the victory, but this team is very special,” said Harley. “We fought all the way until the end, and it put a dagger in their [NC State’s] heart.”

King also made plays with his feet. The Houston transfer was Miami’s top rusher, netting 153 yards on 15 attempts.

“I had no doubt that we were going to win that game,” said King. “I wanted a chance at the end to go down there and score. I thought the offensive line played great and the receivers made plays all night. Shoutout to the defense for getting the stop on the last couple drives. We just finished the game. As far as me and how I was feeling, I was just feeling confident. I was just going to let it rip all night, keep throwing the ball and running the ball when I had to. I was just playing free; going out there and trying to play the best that I could play.”

In a 2020 season across all of football defined by high-powered offenses and quarterbacks, it’s safe to say that Miami finally has a weapon that can grind out winning efforts, even when other factors aren’t going the team’s way.

Cam’Ron Harris had been frustrated in recent weeks due to a decreasing workload compared to upstart freshmen Jaylan Knighton and Don Chaney Jr. But UM relied heavily on the junior Friday night, giving him 15 carries on his way to an impressive 62 yards.

While King and the passing game deservedly earned much of Friday’s spotlight, Harris and the ground game played a big role in the win as well.

The defensive front did some make disruptive plays Friday. This showed in the statsheet, where they logged six tackles for loss and a couple of sacks. Even when they didn’t complete the play, the front created enough pressure to disrupt a few pass plays and create opportunities late in the contest.

But the secondary fell far short of standards and dragged the entire defense down for much of the game. NC State quarterback Bailey Hockman threw for 248 yards while completing 19 of his 28 passes. The Canes allowed six passing plays of over 15 yards.

Heading into the fourth quarter, Miami allowed points on six of NC State’s eight drives. That simply isn’t a recipe for victory in most games.

But they rise to occasion in fourth quarter

It wasn’t pretty on the defensive side of the ball Friday night. Some things will have to be fixed. But it can’t be ignored that the unit found a way to get stops when it mattered most.

Three times, the Wolfpack took over on offense in the final quarter. They had put up 34 points and 404 yards in the first 45 minutes of the game. But Miami got two major stops to give the offense a chance to take a late lead. Then, when UM was clinging to a three-point advantage in the waning minutes, DJ Ivey caught a deflected pass to force the only turnover of the night and seal victory for the Hurricanes. The Hurricanes allowed just six total yards in the final period, in. comparison to gaining 213.

“Our mentality is always to never give up, always be tenacious and play together as a team,” said defensive end Jaelan Phillips. “I think this was an incredible challenge for us as a defense to stay together. When things kind of start to, I don’t want to say fall apart, but when things kind of start to slip a little bit and you lose some yards and some big plays, it’s easy to kind of get disbanded. But I think that we held it together really well and I am just extremely proud of our team.”

“There’s a lot of disappointing things, but when we needed to make plays, the guys believed in each other and they found a way to get it done,” said Diaz.

Penalties were a consistent issue for the Canes. This was apparent on kickoff returns, of which UM committed three on six total returns.

But the lowlight for the specialists was giving up a 100-yard touchdown in the third quarter to NC State’s Zonovan Knight. On a night the offense was already outperforming the defense, giving a free seven points to the Wolfpack only lengthened Miami’s odds of completing the road win.

Jose Borregales remained the sole consistency on special teams. He was 3-3 with a long of 38- yards, with his only miss of the season still to date coming on a blocked kick.

The team will come home and watch Clemson take on Notre Dame Saturday night in a battle of unbeatens. The game is a huge matchup with ACC Championship Game implications. UM remains in the hunt to make the title game as a one-loss team.

But the Canes’ best hope to advance to Charlotte lies in their ability to take care of their own business. Four games remain in the regular season, all conference tilts, with a date at Virginia Tech next up for Miami. The Hurricanes will look to avenge a 42-35 loss from last season.