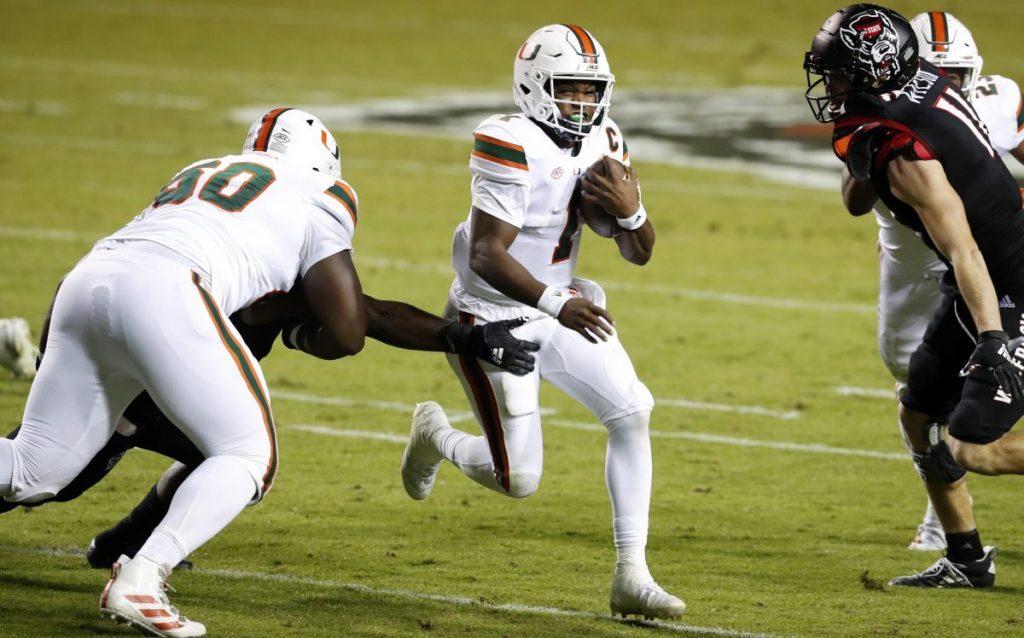 Thanks to D’Eriq King’s phenomenal performance in Raleigh, North Carolina, the Miami Hurricanes rallied back from a 41-31 deficit to defeat the NC State Wolfpack 44-41 Friday night.

King accounted for 535 total yards of offense, including 430 passing yards, 105 rushing yards and five touchdowns. And because of those numbers, the Canes had won a game coming off a bye week for the first time since 2017 against Toledo.

Down 41-37 with just under four minutes to go in the fourth quarter, King orchestrated an 84-yard drive in one minute and eight seconds that resulted in a 54-yard touchdown pass to Mike Harley.

“I was super confident,” King said.”Honestly, I had no doubts that we were going to win that game. The offensive line played great and receivers made plays all night. We just finished the game.”

“What King did tonight was phenomenal. He was at his best when his best was needed,” Miami head coach Manny Diaz said.

Senior receiver Mike Harley’s late game heroics involved catching a 54-yard touchdown pass from King with 2:43 left in the fourth quarter to put the Canes ahead. Harley finished with eight receptions for 153 yards and two touchdowns.

“Mike Harley leads the way, to make that play, what a warrior, heroic tonight,” Diaz said after the game.

With 4:45 left in the third quarter, Wolfpack running back Zonovan Knight returned a kickoff 100-yards for a touchdown and shortly after, kicker Christian Dunn nailed a 53-yard field goal that gave NC State the 41-31 lead. But a pair of field goals — 38 yards and 22 yards — narrowed the gap and then King and Harley’s go-ahead touchdown put Miami in front.

The first quarter of the game was an offensive shootout, with both teams scoring two touchdowns each. Bailey Hockman struck first for NC State with a 31-yard touchdown pass, but King and tight end Will Mallory reciprocated with a wide open 3-yard touchdown pass just minutes later. Hockman threw his second touchdown, an 11-yard pass, to receiver Devin Carter.

King then went back to back with two touchdowns, the first a 39-yard pass to Dee Wiggins and the second a 20-yard pass to Mike Harley in the first few minutes of the second quarter to push Miami’s early lead to 21-14.

But the Wolfpack got the last licks of the first half with a field goal and 9-yard touchdown pass to end the half up 24-21.

Miami was without starting tight end Brevin Jordan, who appeared to be healthy this week, but was listed as unavailable alongside 10 other players.

The Hurricanes are now 6-1 and still in contention to be selected for the ACC Championship game in December. A loss would have put them out of the race because No. 1 Clemson and No. 4 Notre Dame, who face off this week, do not have any losses so far this season. If Notre Dame loses Saturday night, they will fall into a second-place tie with the Hurricanes in the ACC standings.

Next week Miami travels to Blacksburg, Virginia to face the Virginia Tech Hokies (3-2, 3-2) with some confidence in their step from this big victory.

“Everything is falling into place,” Harley said. “Everyone will remember November.”

Live Blog: No. 11 Miami vs NC State
It took fourth quarter fireworks under Friday night lights, but the Hurricanes stole a win