With the result of the presidential election between President Donald Trump and Democratic Nominee Joe Biden still not final, University of Miami School of Law professor Daniel Ravicher began tweeting his views on Twitter in support of Trump, which included accusing the Democrats of cheating by deliberately stopping votes.

Democrats in Philly, Atlanta, Detroit, and other swing state cities know @JoeBiden has lost. They've stopped counting votes just to deny @realDonaldTrump ability to win tonight, to falsely claim election was close, to weaken him. Like all their other dirty tricks, it won't work.

Ravicher also expressed his opinion about cheating in the American election process: “Cheating in politics is as American as apple pie. If you’re good enough to get away with it you deserve to win. That’s how it always been and how it always will be.”

At UM, Ravicher is a lecturer in the law school and is the director of the Startup Practicum, which provides students with the opportunity to provide legal assistance to new business ventures.

Latinos are now clearly the most politically important minority group in America.

Blacks allow themselves to be taken for granted and treated horribly by Democrats. Latinos don't.

Also, population difference will grow bc blacks have 50% more abortions than Latinos per cap. https://t.co/g55s067cCg

However, yesterday, Ravicher then followed up that tweet that he came up with that opinion based on population trends and voting patterns. He also added he welcomes disagreement.

Heading to @Walmart to get what I need to protect my family from "peaceful protesters" who can't accept the result of an election.#SecondAmendment #StandYourGround

The University of Miami was originally mentioned in Ravicher’s Twitter bio, but it has since been deleted.

As these tweets began to spread amongst undergraduate and law students, one Black undergraduate student who was considering remaining at UM for law school said that now it is completely out of the picture.

“Never did I ever imagine such disgusting rhetoric would come from a professor at UM Law,” said junior Charis Pitter, who hopes to serve as a lawyer for marginalized communities. “As a UM student, I’m disappointed, angry, but not surprised because the way the UM administration has handled hate speech during this election season shows their true colors. I came here because UM always preached diversity and acceptance, but I no longer feel like I’m at an institution that values me.”

Raven Bedford, a junior psychology major who is also Black, said having a professor perpetuating what she alleges as extremist views with racist undertones teaching students sets a dangerous precedent as she said she fears such views could wind up in the classroom.

“He seems extremely racist, radical and dangerous and, at the very least, he follows others on social media who most would consider unhinged and extremist in their views,” said Bedford. “This man’s tweets have violent and racist undertones. I can’t imagine those views don’t leak into the classroom when he teaches. As a Black student, I don’t feel or welcome on a campus where professors advocate for my dehumanization on Twitter, and I can only imagine how the Black students in his classes feel.”

This development of Ravicher’s Twitter comes in the wake of tension on campus surrounding free speech after a pro-Trump sign was vandalized and the UM College Republicans decided to hang up 300 more. Students say they felt unsafe on campus as a result.

After both Pitter and Bedford approached the law school about Ravicher’s Twitter, they were told to file bias reports with the university to express their concerns.

Third-year law student Christian Pasciak, who also is a member of the Student Bar Association at UM, acknowledged the importance of every American’s right to free speech but expressed his concern about how these tweets can impact students, especially those within the Black community.

“We cannot seek to silence everyone just because we disagree with them. That said, our professors are leaders who set the standard for our students,” Pasciak told The Hurricane. “If our law school’s goal is to truly be inclusive and to make students feel comfortable, how can we continue to write checks to a professor who thinks that all Black people are simply people who allow themselves to be victimized, as the professor’s tweets say.”

Pasciak added this type of sentiment towards the Black community stems back to Reconstruction after the civil war in an effort to disenfranchise newly freed slaves. Thus, he said this type of speech is “downright reprehensible.” The Student Bar Association is currently drafting an email to Law Dean Anthony Varona over the tweets and Pasciak said he is aware six students have reached out separately to the dean. The university has not returned The Hurricane’s request for comment.

The Hurricane reached out to Ravicher over his tweets, to which he replied:

“I can’t respond to general conclusory allegations,” Ravicher told The Hurricane. “I’m also not sure how someone else defines the word ‘misleading.’ That word is in the eye of the beholder. If someone would like to identify a fact they allege I’ve asserted is not accurate I’ll review any contradictory evidence. If someone doesn’t like my opinion, that’s their right, but mine is unlikely to change.”

Additionally, after students expressed concerns over alleged racist undertones in the tweet about Black voters being treated horribly by Democrats, The Hurricane asked Ravicher for a response, and he told Hurricane that there is data proving his sentiment regarding the Democratic party and Black voters.

“I can’t defend things I didn’t say,” said Ravicher. “What I said was, ‘Blacks allow themselves to be taken for granted and treated horribly by Democrats.’ I then provide the data that shows Black voters are much less likely to be swing voters, that they overwhelmingly vote Democratic and are materially less likely to take away their vote from Democrats than any other group. That is of course their choice.”

Ravicher added he has never been accused of any bias in the past and he works directly with women of color.

“I teach about 150 students a year and I get outstanding evaluations. I’ve never, to my knowledge, ever been accused by any student of any bias ever,” Ravicher said. “Indeed, the top student in my course over the summer was a Black woman. My direct boss is a Black woman, as is my assistant. Neither of them has ever, to my knowledge, accused me of being racist. I’m also married to a woman of color. But, if people want to call me racist, I guess that’s their right.”

Update: Ravicher tweeted he will not resign from his position at UM Law. However, he said since he believes he will soon be out of a job, he will join President Trump’s legal team to fight his case in the Supreme Court regarding this presidential election.

Since I'm going to be out of a job soon, I'm going to reach out to the @realDonaldTrump legal team and offer my services pro bono. I've already won one Supreme Court case. Time to add another.

TikTok, Cardi B and voter registration: How politicians are turning to social media to reach young voters
No. 11 Hurricanes “stay positive” as they head to NC State for matchup with Wolfpack 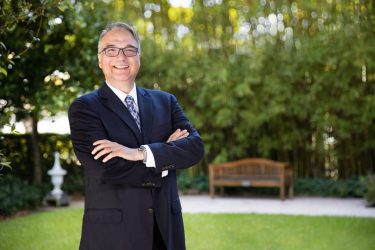