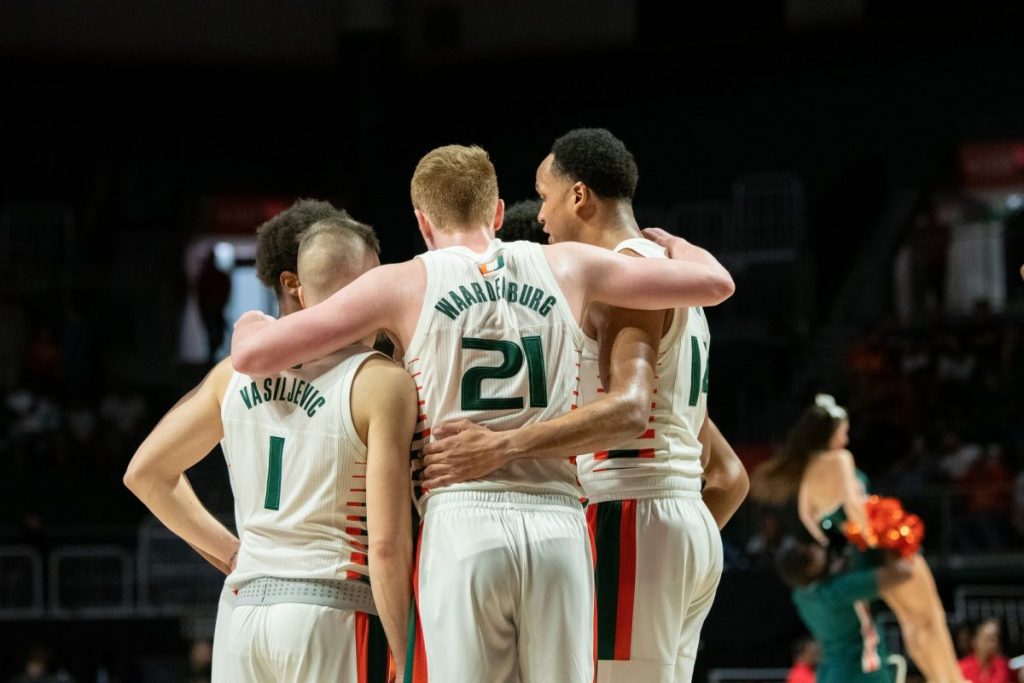 Miami's men's basketball team huddles during a timeout during their game versus Pittsburgh at the Watsco Center on Feb. 2, 2020. Photo credit: Jared Lennon

Men’s basketball coach Jim Larrañaga is going on his 10th year as head coach at Miami, while women’s coach Katie Meier is entering her 16th season as head coach at UM, and neither of the two have faced anything close to the unprecedented challenges this offseason brought.

After the end of last season for both teams was cut short because of Covid-19, the players and coaches weren’t allowed back in the UM facilities until mid-July. At this point, neither team knows what this season’s schedule will be, although NCAA basketball schedules are expected to be released soon.

With the college basketball season set to kickoff on Nov. 25, both teams are doing all they can to stay safe while preparing for the start of the season.

Men’s team will be without Sam Waardenburg

Miami will have to adapt to playing without redshirt senior forward Sam Waardenburg, who will miss the entire 2020-21 season after he suffered a season-ending foot injury in practice, announced by UM last week. The New Zealand native started 24 of 30 games for Miami last season.

“He was our most experienced front-court player, our leading rebounder from last season,” Larrañaga said. “He was practicing extremely well and we are going to dramatically miss his defense, his rebounding, his experience and just his overall demeanor on the court. He was someone that did a lot of different things for us.”

The competition to fill his spot on the court is between freshman Matt Cross, sophomore Anthony Walker and redshirt junior Deng Gak, all players who have limited experience playing for Miami. Walker played limited minutes last year, Gak has struggled with injuries throughout his career at UM and Cross is a true freshman.

Because Waardenburg was strong on the defensive side, Larrañaga is looking for one of those three inexperienced players to step up specifically in that area.

“It’s who’s going to bring it defensively, because we have been perhaps the worst defensive team in the ACC the past two seasons,” Larrañaga said.

One player who Miami will undoubtedly benefit from having on the court this year is redshirt senior Nysier Brooks, who transferred from Cincinnati last season, but had to sit out the year due to NCAA transfer rules.

A 7-foot center, Brooks was one of the best defenders in the American Athletic Conference when he played at Cincinnati. His teammates and coaches describe him as a vocal leader who contributes just as much with his game as he does with his attitude.

“He’s one of those guys on the team that every good team has,” teammate Kam McGusty said. “Just that one guy that brings energy everyday, that’s always trying to help out, always doing what’s best for the team. He’s our energizer. It’s definitely a blessing to have him on the team.”

Larrañaga expects Brooks to be a key part of the defense and be at the forefront of rebounding and blocking shots.

Guards are better and stronger

If last year’s team revealed anything, it’s that when healthy, Miami’s guards are extremely talented. Chris Lykes, a 5-foot-7 senior, has been the centerpiece of Miami’s offense the past two years, but the guard dealt with an injury last season that forced him to miss significant playing time and required him to get knee surgery. Larrañaga, however, feels that Lykes is playing some of his best basketball in practice right now.

“He came back very, very strong and he rehabbed the knee, got himself in great shape,” Larrañaga said. “He’s had a great summer and fall.”

Sophomore guards Harlond Beverly and Isaiah Wong both saw increased playing time in the latter half of last season after Lykes went down and they impressed everyone. Wong, who stands at 6-foot-3, has put on 20 pounds this offseason, according to Larrañaga, who also said Wong is shooting 3-point shots with much more confidence in practice now. And the 6-foot-5 Beverly, has also made improvements over the offseason, specifically with his defense.

Miami’s fourth returning guard is McGusty, who played his first season at UM last year after transferring from Oklahoma. Larrañaga told McGusty in practice recently that “that’s the most athletic I’ve seen you since you arrived.” McGusty also missed a few games last season because of back pain, but now, after having overhauled his diet and lowering his body fat percentage from 12 percent to eight percent, McGusty is feeling pain free.

Rounding out the “very solid” five-man rotation at the one, two and three guard spot will be 6-foot-6 freshman Earl Timberlake.

Meier looking to break through in March

Women’s head coach Katie Meier has accomplished a lot in her 15-year career as the coach of the Hurricanes, including 10 straight postseason berths from 2009-2019, but last year her team went 15-15 (7-11 ACC). Her goal this year is to break through the second and third weekend in March.

While Meier would like to see her team make the postseason this year, what she’s most proud of is the 100 percent graduation rate of her players.

“I think the 100 percent graduation rate and 10 straight postseasons is pretty impressive, more so the graduation rate,” Meier said. “Everyone that’s ever played for me that spent four years has graduated and never had an ineligible player, so the culture’s good.”

Out of this year’s 14-man roster, five of the women’s basketball players are international players, from France, Spain, Sweden and Croatia. Meier said the relationship she has with international recruiting is all based upon the positive experience her current international players have, who spread the word to teammates back home. For example, Meier found out about and was able to recruit French junior forward Naomi Mbandu because of the relationship from playing together that Mbandu had with sophomore guard Kenza Salgues, who is also from France.

“There’s a connection because of the experience,” Meier said. “It’s worked out for us.”

Meier also said her team benefits from having international players because of how athletic they are and because of the fast pace they play at in Europe.

“We have a very athletic style and we’ve been able to use the international players in positions of the vision and the passing and they really keep us playing fast, so that’s really helped and I’ve really fallen in love with that combination of talent,” Meier said.

Seniors are ready for postseason run

Miami has four returning seniors — Mykea Gray, Kelsey Marshall, Endia Banks and Taylor Mason — on the roster and they have all played together since freshman year. This season they are working harder than ever to bring the team on a postseason run.

“Basically, this being our last year, we’re just gonna try to make a statement,” Gary said. “We know each other’s tendencies now while we’ve also improved as well so just knowing the things that they are capable of, it’s going to be amazing and you will see it on the court.”

The pandemic, coincidentally, has brought the team closer together and made their love for basketball grow stronger.

“Not having actual games right now, we appreciate the little details that we need to correct in practice and we just go much harder than we ever have before,” Mason said.

The top moments of the Miami Heat’s surprising championship run
After UMPD denies use of facial recognition, surveillance cameras brought into question