Members of the University of Miami College Republicans were told by a UM official to take down a sign reading “I’m pro choice. Pick your gun,” while tabling outside of Shalala on Thursday, said UMCR President Andrew Hefley. The sign showed different types of firearms, including an AR-15, a frequent weapon of choice for mass shooters in America.

“I do feel like there is a time and a place,” said UM senior John Cuddihy. “That’s where I think maybe it was too much on a college campus…I think there’s a distinction between glorifying assault rifles and just being pro-gun in general.” 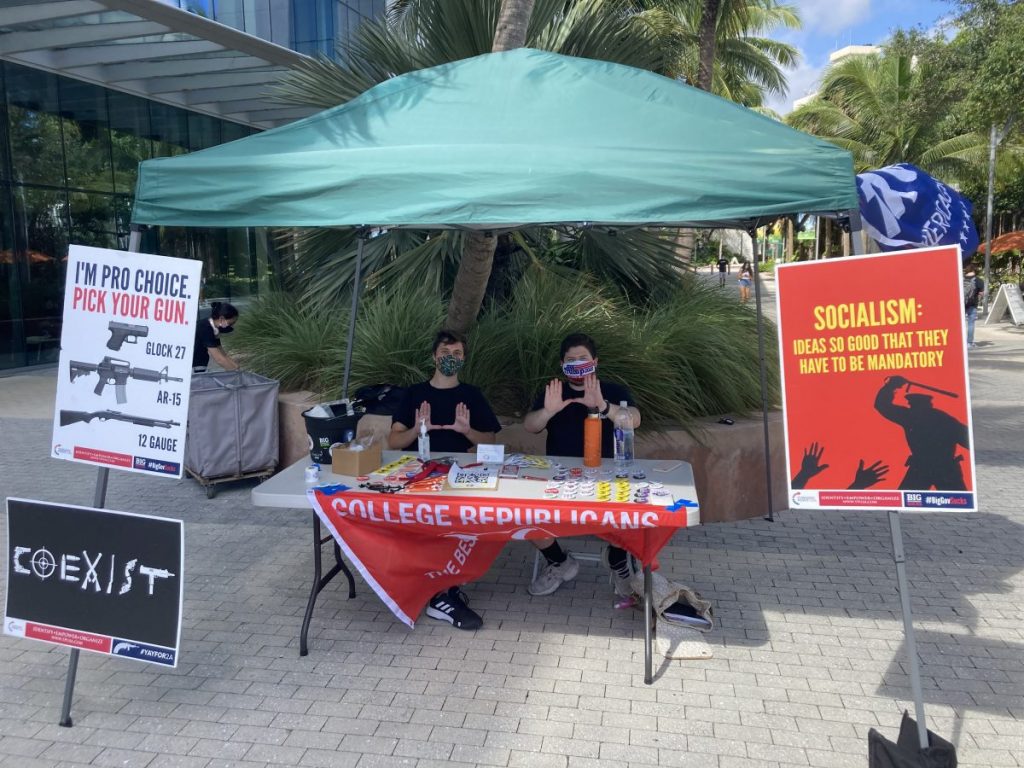 Hefley said that while tabling, UMCR received a call from the Director of the Student Center Complex saying that their sign violated university policy.

Other students, including junior Nathaly Gonzalez, were adamant that UMCR was intentionally instigating public discord.

“They are purposefully making the campus an uncomfortable place to exist,” Gonzalez said.

The appearance of political ads on campus has sparked debate among UM’s student organizations, with UM’s student Senate discussing Wednesday whether or not to establish stricter regulations.

“A sign that might perpetuate fear of racism, certain inherent feelings that they might feel unsafe, minority groups, people who identify a different way… I think that’s when the discussion comes in of whether a sign should be put up in the first place,” said Eaton Residential Senator Ishaan Chatterjee.

With the election less than a week away, President Julio Frenk issued a statement over email in response to the vandalism of a Trump campaign sign Monday defending the right of students to display partisan political posters on campus.

The email entitled,”A Message on Mutual Respect” stated that UMCR was exercising their right to free speech and denounced the vandalism.

“This is an unacceptable act of disrespect, and those found responsible will be held accountable,” Frenk wrote.

Student Sen. Randy Fitzgerald advocated for the rights of student organizations to display partisan banners on campus during the senate meeting.

“I don’t believe Student Government should be in the business of commenting as an organization on major parties’ nominees to the extent that we should attack the president of the United States, and consequently, our colleagues on this campus who support him as ‘racist, homophobic, and bigoted’,” Fitzgerald said.

Both UMCR and the UM Young and College Democrats now have banners outside of the bookstore promoting President Donald Trump and Democratic presidential nominee Joe Biden, respectively.

The banners have been the subjects of heated debate among students and professors at the university, with one alleged employee caught on tape dismantling one of UMCR’s Trump signs. UM declined to say if the individual was an employee.

Hefley claims that the individual was apprehended by UMPD; UM declined to confirm or deny this.

UMCR leaders say UM has been as helpful as possible to their organization; the university recently approved 300 pro-Trump yard flags to be placed on the campus grounds.

“I really appreciate that the university has not cowered down to the liberal mob mentality of the leftists on campus and they have allowed our free speech,” Hefley said.

“I thought it was entirely shameful,” she said. “It’s unfortunate that they went after the vandal the way that they did. It’s in the guidelines that the school takes no responsibility for any damage inflicted on the banners, so what makes this sign so different?”

Hefley says that the Republican Party of Florida gifted the UMCR new banners when theirs were vandalized.

The debate among students has largely centered on whether a campaign sign for the incumbent president is divisive enough to forbid on campus, with some voicing support for the sign, as long as other views are equally represented.

“I think it’s okay because you see political ads everywhere, I’m just more for unbiased stuff. Don’t put a focus on one view, put them both in the center,” said UM freshman Michael McGurk.

UM Young and College Democrats President Rachel Stempler says that her organization was surprised to see the Trump signs on campus.

“We were not even aware that partisan political banners would be allowed on campus, and we felt like it was not handled well by administration as far as making sure everyone’s political beliefs were represented,” Stempler said.

Hefley says the UMCR reached out to the UM Student Services Center two months ahead of time. The UM Student Center Complex referred to their rules and policies as it relates to the partisan banner debate. Hefley claims restrictions on banner protocol were lifted to allow the UM Young and College Democrats to display a Biden sign.

“They are trying to accommodate us because… I think they did see that it initially wasn’t handled well,” Stempler said, adding that UM Student Center Complex employees have been generally helpful since the Trump sign went up.

Gonzalez said that the UMCR’s promotion of Trump is dismissive of the feelings of other students and that UM made a mistake to allow the banner.

“Not even having the forethought about optics, how that will impact your fellow students,” she said. “You can sit there and say, ‘no we’re not all xenophobes, no we’re not all homophobes,’ however actions speak louder than words.”

Hefley, however, said he believes it is the students, and not the administrators, that have acted inappropriately in the days leading up to the election.

Both Hefley and UMCR Treasurer Ben Dias said that the sole motivator for putting the Trump sign up in the first place was to drive interest in the club. Pasted onto the sign was information about the club, its meeting time and a QR code.

“Our motive was to promote our organization’s meetings…we used an eye catching banner to do that,” Hefley said. He claims that UMCR has had “an absolute boom” in membership as a result of the signs presence on campus.

Dias agreed that the controversy brought on by their choice to use a Trump-Pence sign as advertisement for a campus club has brought them new attention.

“Not a lot of people feel comfortable voicing their opinions on campus, and we kind of wanted to have a big broad flashy advertising for them, and I mean, as you can tell, it worked spectacularly,” Dias said.

When approached for comment for this article, UM declined to make anyone available for an interview. Rather, they deferred to Frenk’s initial email.

UM senior Dina Thomas said Frenk’s email was an insufficient response, claiming the university should have been more considerate of it’s student body before it allowed a political ad on campus.

“UM should have taken a united stance beforehand, seeing the reaction to the sign, knowing what their students are up to and how their organizations make people feel since they claim they’re trying to make a campus that’s open for everybody,” Thomas said.