The Miami Hurricane previously reported on Oct. 15 that Sigma Chi and Pi Kappa Alpha at the University of Miami were being investigated for illicit parties that violated covid protocols. The investigations have since concluded, culminating in a suspension for Sigma Chi (Sig Chi) and probation orders for Pi Kappa Alpha (Pike). Senior Associate Dean of Students Steven Priepke confirmed the punishments on Wednesday, Oct. 28.

“You are almost expelled,” Priepke said of an organization that gets suspended. “You are not allowed to do anything. You don’t operate at all.”

Sigma Chi has been suspended for “at least” the remainder of the semester, Priepke said, after which, its leaders can apply for reinstatement.

“If people do violate the policies, they will be held accountable,” Priepke said.

Fraternities breaking rules and throwing parties during the pandemic has been a recurring theme since the semester started. The Miami Hurricane has been following this since September, when parties at Sigma Chi and Pi Kappa Alpha were first reported. The punishments for Sigma Chi and Pi Kappa Alpha are the first reported punishments for fraternities at UM in violation of the university’s Covid-19 protocols barring parties of any kind.

The suspension for Sigma Chi relates to a party they hosted on Oct. 1, where a police report was filed. At the time of the party, Gustavo Alexanian, Sigma Chi’s vice president, spoke to police on the night of the incident. According to the police report, Alexanian said he was “unaware” of Covid-19 restrictions. Alexanian did not respond to request for comment. Both Sigma Chi President Zack Slogoff and Pi Kappa Alpha President Nicholas Tricarico did not respond to requests for comment.

“I hope the message has been heard and understood,” Priepke said.

When news of the investigation first broke, many Greek life members expressed skepticism that UM would follow through with punishment, but now say they are grateful for the administration taking actions.

“Great decision on admin. I’m very proud,” said a sorority member in response to the punishments. “It’s appropriate considering everything I’ve been hearing.”

While Sigma Chi is suspended, Pi Kappa Alpha’s probation means the organization can continue to operate with restrictions. However, if Pi Kappa Alpha gets in trouble during its probation period, Priepke explained penalties will be more severe. 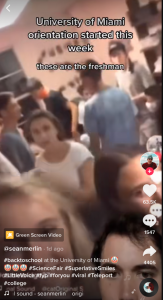