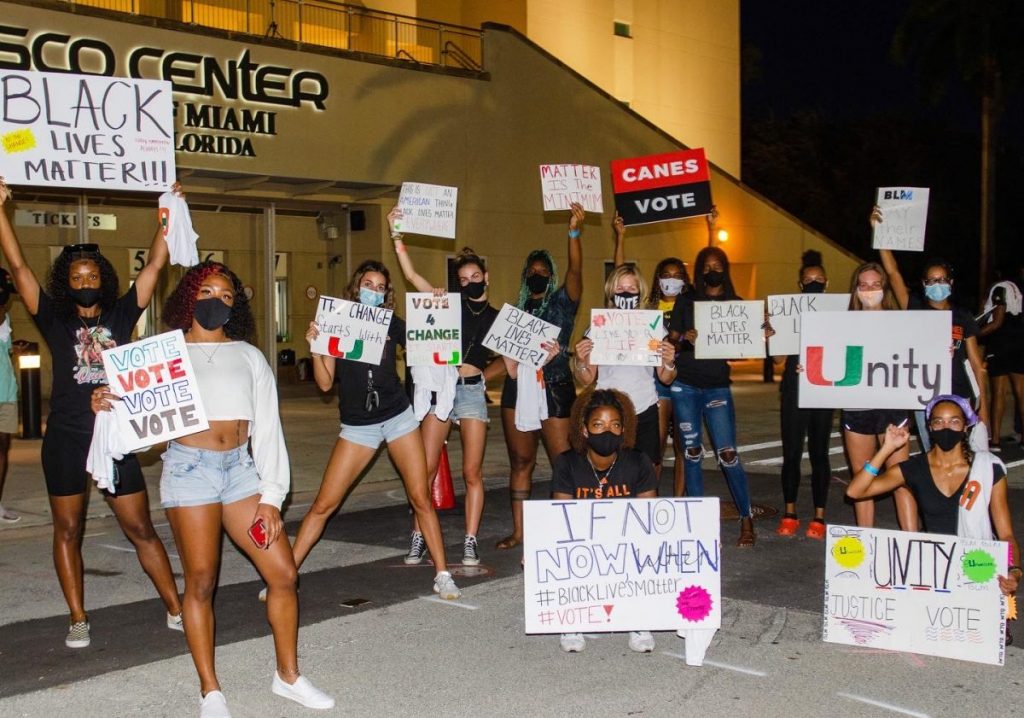 Student athletes gather outside of the Watsco Center for a social justice rally, protesting for societal change and encouraging people to vote. Photo credit: Twitter, @MiamiHurricanes.

NBA star Lebron James, back in 2018, was infamously told to “shut up and dribble” by Fox News host Laura Ingraham after James was criticizing President Donald Trump in an interview with ESPN’s Cari Champion.

James is no stranger to speaking his mind when it comes to politics and social injustice in the United States. He undoubtedly serves as a role model for many college athletes who are using their platform to vocalize their concerns, including student-athletes at the University of Miami.

Like much of America, UM student-athletes witnessed the racial injustice movement that spread across the nation in response to the murders of George Floyd and Breonna Taylor over the summer. The UM women’s basketball program, in particular, spent a lot of time discussing these situations with each other and decided that the best way they can try to make a change is by using their platforms and voices to promote what they believe in.

“We have these talks on a regular basis,” said senior guard Mykea Gray. “The team is very comfortable with expressing themselves, how they feel about what’s going on in the world, what we want to do about it.”

“Unfortunately, we had an opportunity to see some tough things in our country,” women’s basketball head coach Katie Meier said. “Some really unfair moments where justice wasn’t being served. And you know, we had a very strong voice collectively, we wanted to respond.”

The team, in conjunction with the men’s basketball team, swim and dive teams, track and field team, volleyball team, faculty in the athletic department and other UM students, decided to take action in the form of a socially distanced voting rally at the Watsco Center.

Many players and coaches, including Meier and head men’s basketball coach Jim Larrañaga, spoke to attendees about the importance of voting and supporting change. Meier spoke specifically about how change in our country often starts on college campuses.

And while the rally lasted only one day, the fight continues. Currently, 100 percent of the UM women’s basketball team is registered to vote and plans to participate in the presidential election.

“I think it’s so important that we all go out and vote,” said freshman Nyayongah Gony. “I’m a first-time voter, and so are a lot of people. And I think we’re a super diverse group, like probably the most in our history. In these times, it’s been apparent that our voices matter, and our voices can create change.”

The voices of student athletes have been heard, as the NCAA announced in September that all Division I schools would be prohibited from practicing, competing or participating in any athletic-related event on Nov. 3 in an effort to encourage student-athletes to vote. The NCAA Division I Student-Athlete Advisory Committee, composed of representatives from all 32 Division I schools, proposed this legislation earlier in the year, and it passed on Sept. 16. It was the first piece of legislation the SAAC has proposed since 2014.

The Atlantic Coast Conference has also taken action in the push for social justice and voting. The conference announced its plans to host its first ever “Unity Week” from Oct. 24 to Oct. 31. Developed through the efforts of the ACC’s Committee for Racial and Social Justice in conjunction with member institutions, “Unity Week” aims to unite the conference in the fight for social justice and eliminate systemic racism.

Some initiatives of “Unity Week” include changing all social media profile pictures to feature the “ACC UNITE” logo. The ACC will highlight specific themes each day during the week. The conference plans to release a highlight video of the social justice initiatives that member schools have participated in since the beginning of September. The ACC will also hold a virtual webinar for ACC student-athletes on activism and allyship.

The conference announced its plans to host its first ever “Unity Week” on Oct. 24-31. Every ACC fall sport will be in action, and 11 ACC football teams have scheduled home games over the course of the two weekends. In addition, the ACC is providing all its student-athletes with “UNITE” wristbands and is creating an individual theme for each day of the week. The conference also plans to change all its broadcasting logos to “ACC UNITE” logos.

“I applaud the work of CORE and our member institutions to develop Unity Week into a meaningful and fulfilling week to unite around social justice for all, and eliminate systematic racism,” said ACC Commissioner John Swofford. “College sports provide a unique opportunity to bring people together from all backgrounds and celebrate the accomplishments on and off the playing field of our student-athletes.”

Students forced to move out of dorms to create additional quarantine rooms
Miami in the NFL: Week 7