Miami in the NFL: Week 7 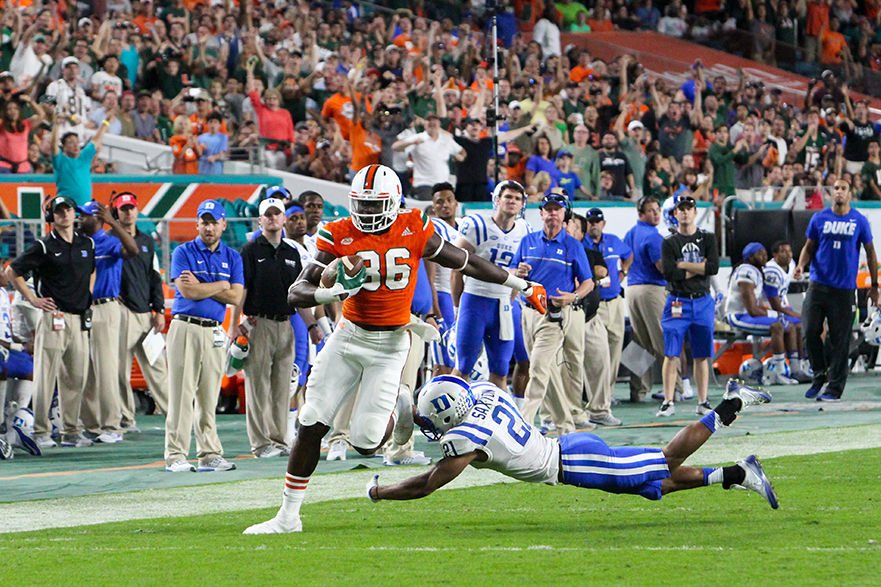 The National Football League season continues to fly by, with seven weeks already in the rearview mirror in the 17-week season. Week 7 was marked by a pair of NFC East clunkers, a battle between two 5-0 teams and Sunday night shootout in the desert.

Tight end David Njoku spent three weeks on injured reserve due to a sprained MCL. But he was reactivated in Week 6 and made his first major contributions since returning Sunday, catching two passes for 20 yards and scoring a go-ahead touchdown in the fourth quarter for the Cleveland Browns. The Browns won 37-34 at Cincinnati in a game with five combined fourth quarter touchdowns and as many lead changes. Njoku was also largely covered by a Bengals linebacking unit coached by former UM head coach Al Golden. On defense for Cleveland, defensive end Olivier Vernon made two total tackles as well as completed a half sack, and safety Sheldrick Redwine made a solo tackle.

The Seattle Seahawks were beaten at Arizona 37-34 in an overtime thriller. In spite of the loss, tight end Greg Olsen caught two passes for 18 yards, running back DeeJay Dallas hung the exact statline up as a pass catcher and fellow ball carrier Travis Homer had three carries for 10 yards.

Linebacker Denzel Perryman and safety Rayshawn Jenkins were teammates at UM for two years, and the combination presence for the Los Angeles Chargers has very effectively translated at the professional level. Jenkins led the Chargers in tackles with eight, seven of them being solo stops. Perryman meanwhile added three total tackles of his own including two solo in a 39-29 home win over Jacksonville.

Even in a 24-10 road loss at the Rams, Chicago Bears tight end Jimmy Graham caught five passes for 31 yards, while safety Deon Bush added a solo tackle. Pat O’Donnell punted five times for 238 yards and pinned LA inside their own 20-yard line twice.

The New York Jets fell to 0-7 with an 18-10 home loss to the Buffalo Bills despite leading at halftime. Running back Frank Gore led New York with 60 yards rushing on 11 carries and Braxton Berrios caught four passes for 35 yards. On the Buffalo defensive side, safety Jaquan Johnson made a single tackle.

Cornerback Corn Elder made three tackles, two of them solo in a 27-24 road loss for his Carolina Panthers at the New Orleans Saints. And Broncos linebacker Anthony Chickillo had two tackles, one solo in a 43-16 home loss to Kansas City.