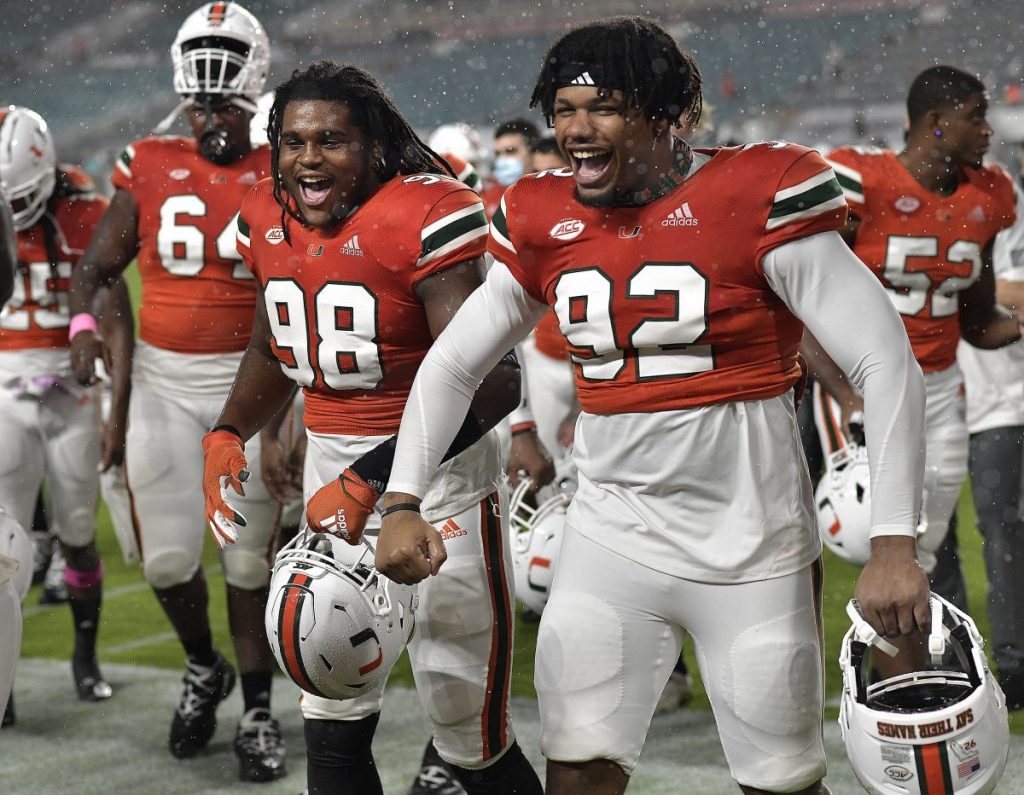 With Election Day just a week away, Miami head coach Manny Diaz told reporters on Monday that his players were 100 percent registered to vote back in July.

Led by running backs coach Eric Hickson, a social justice council was formed earlier this year and Diaz said the council was responsible for making sure all football student-athletes were registered to vote.

Diaz said the coaching staff is going to push for players to get to an early voting location some time this week. given that the team has a bye this week.

“You’ve got a team full of everyone who this will be the first election they’ve ever voted in,” Diaz said. “Really proud of the council, proud of the guys to be able to do that.”

The NCAA also passed a new piece of legislation that prevents athletic activities from taking place on Nov. 3 in an effort to encourage student-athletes to vote. The Canes are scheduled to play NC State on Nov. 6 and typically taking a day off from practice mid-week is not ideal for any football team, but Diaz said they will shift their Tuesday/Wednesday practice to Sunday/Monday, take the day off Tuesday, and use Wednesday/Thursday as prep before flying to Raleigh, North Carolina.

When asked about whether the coaching staff discusses politics and the upcoming election with the players, Diaz said “We don’t want to get into points of view because its not our place to tell anyone who to vote for,” but did explain that he plans on having a meeting with the team this week to explain the “ins and outs of local government.”

“I think everyone understands what it means to elect a president, but I don’t know that our players have the understanding of who’s in charge of what on the local ballot because a lot of what occurs in our community is really dictated by the local governments, county or city,” Diaz said.

“A crash course in civics” will help his players understand not only what they are looking at on the ballot, but the implications of who they vote for in the local election.

Diaz also discussed how challenging it is to be a young person today and not be exposed to political viewpoints.

After six freshmen were listed as unavailable for Miami’s game against Virginia on Saturday, Diaz acknowledged that those players missed the game for Covid-19 related reasons.

“As far as guys not available, this is just the reality of 2020. I know we’re all fatigued of it. We’re fatigued of talking about it. And we’re no different and I’m no different. We can feel it. The coronavirus is not going away.. It is here. You can see the numbers where they’re at, all over the country.”

“We have made sacrifices so long now to get to this point and it’s easy to say, ‘Do we have to continue to do all this and do all this and do all this?’ We have to. We made it this far and we’re a week away from November and we’ve got to continue to do the right things to try to keep these numbers down. I know our positivity rate is low but certainly sometimes that logs two weeks behind to actually what’s going on outside.”

Up until this point, the Hurricanes have done well with avoiding Covid-19. Reportedly only one player has missed a game this season because of Covid-19.

The unavailable freshmen, linebacker Corey Flagg, quarterback Tyler Van Dyke, receiver Xavier Restrepo, defensive lineman Elijah Roberts, safety Brian Balom and receiver Michael Redding III, will have to isolate, even if some of them have not tested positive.

Per the NCAA, a close contact, anyone who has been within six feet of an infected person for 15 minutes, has to isolate for 14 days.

The Hurricanes are lucky they have a bye this week because many of those six players have found significant playing time in the past couple of games.

“We need everybody and that’s why we’ve got to really double down on what we’re doing to try to keep this virus at bay,” Diaz said.

Covid-19 could create college basketball season unlike any before
After Trump poster defaced on campus, Frenk decries vandals’ actions