Home » ‘I just had to step up.’ Mike Harley answers the call at receiver with career day

‘I just had to step up.’ Mike Harley answers the call at receiver with career day 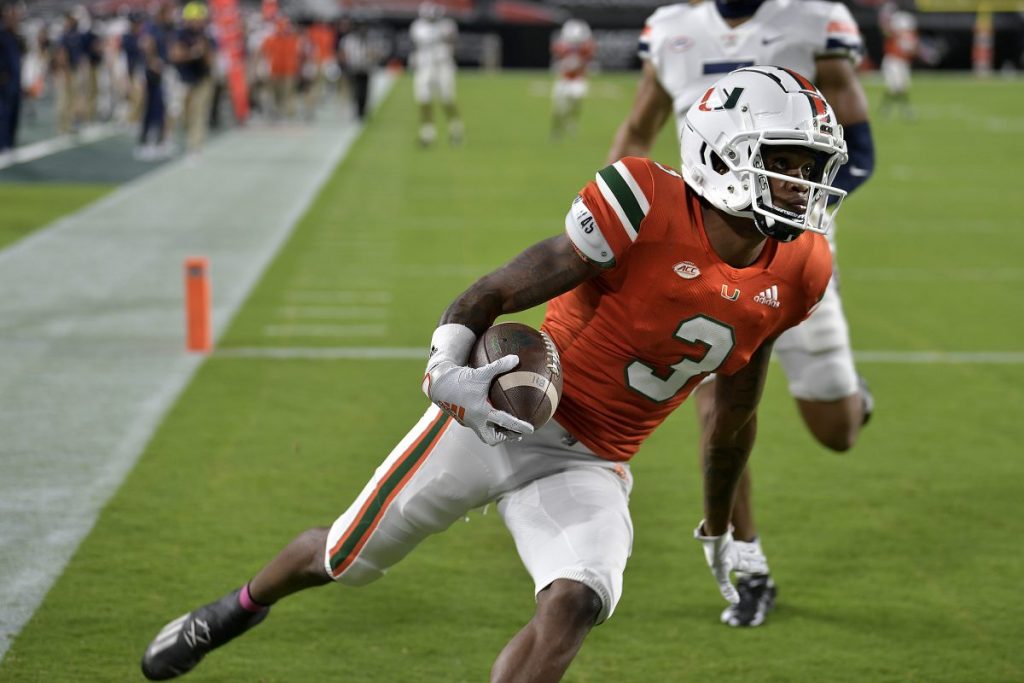 Mike Harley, a senior, took that straight to heart and responded.

Harley helped propel Miami to its 19-14 win over Virginia with a career-high 10 catches for 170 yards and a 43-yard touchdown.

“Someone just had to get out of their comfort zone because it’s too comfortable, so coach made it a challenge, and me being the oldest guy, a senior, I just had to step up, and I just had to stay consistent,” Harley said after the win Saturday night.

Since Miami faced Clemson two weeks ago, the receivers as a group have struggled to make catches, especially on deep throws. But head coach Manny Diaz and offensive coordinator Rhett Lashlee have been preaching that quarterback D’Eriq King needs to continue taking deep shots because the connection will be there eventually and once he can connect down the field, the offense will open up.

Harley’s first catch of the game was a 43-yard touchdown on the second play of the game. That play was something that King and Harley had run in practice this week.

“When we got to the game I was like, no pressure lets make it happen,” Harley said. “He called it and the rest is history.”

King also praised Harley for stepping up in a time when the team needed it.

“Mike played a great game,” King said. “He stepped up. I think the receivers felt challenged through the week just from inside the building. So, he stepped up. He had an outstanding game. I’m happy for him.”

Harley acknowledged that prior to the Clemson game, the receivers were not putting in the necessary work to be at their best.

“We were always taking the shortcut,” Harley said. “We weren’t staging after practice catching jugs. We were just doing the bare minimum. All the extra work that we have to put in after the Clemson game because that’s when we went down hill. When the receivers don’t make plays, the offense kind of struggles.”

And the criticism on social media towards Miami’s receivers has been very apparent since the Clemson game, something that Harley and the other receivers have noticed.

“People tag you, people send certain stuff, but you have to stay strong because nowadays the media can really break and hurt your confidence. But you know me, I just kept moving because I’ve been there, and I’ve done that,” Harley said. “I’ve been in this program for four years and you know how the outside gets. My thing is I took that and got motivated, and I told the younger guys our backs are against the wall. The whole world is challenging us, and we have to step up to the plate, and I feel like that’s what we did.”

The receivers were the reason why Miami’s offense was able to win the game. King finished 21-30 on 322 yards, while Mark Pope had three catches for 48 yards and Dee Wiggins had three catches for 36 yards. Pope had perhaps the most impressive catch of the season so far on a 38-yard diving grab where he was just able to get his foot down before falling out of bounds.

The upperclassman receivers responded when they were called upon and now Miami is 5-1 headed into a bye week before they face North Carolina State University in two weeks.

It was a sloppy Saturday night, but the Hurricanes are 5-1
Covid-19 could create college basketball season unlike any before