Home » Hurricanes grind it out, narrowly escape Virginia in 19-14 win

Hurricanes grind it out, narrowly escape Virginia in 19-14 win 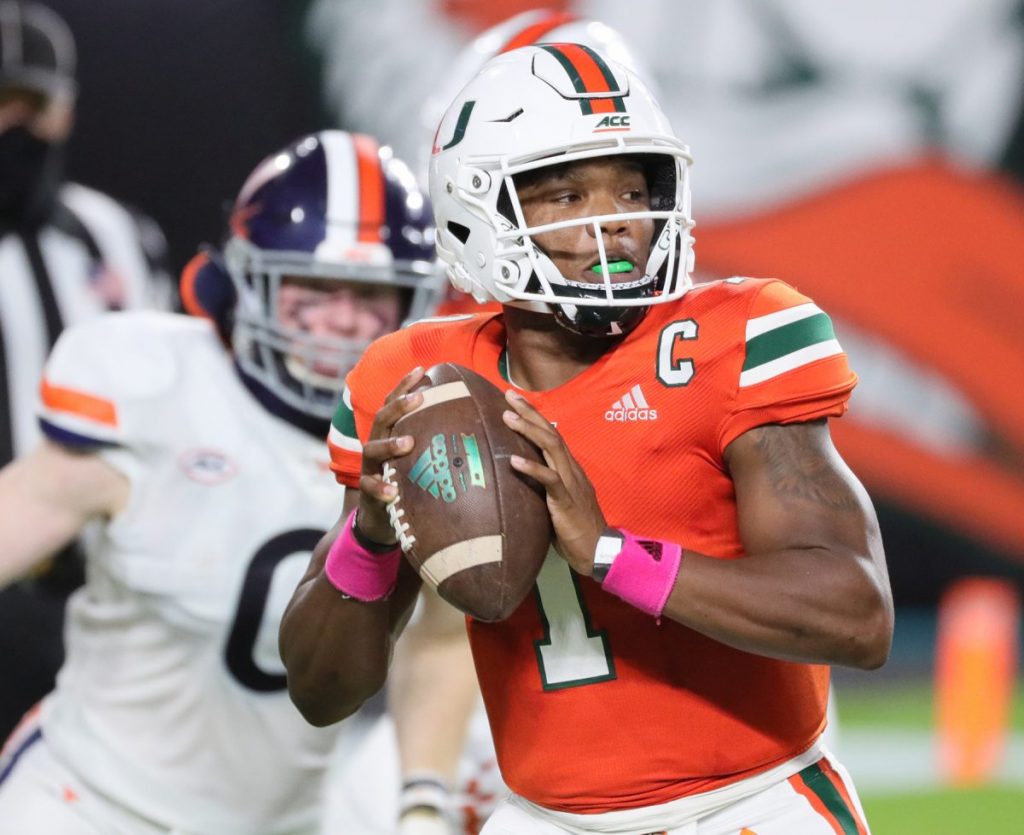 All season long, Miami head coach Manny Diaz has preached how hard it is to win a football game. And tonight’s win over Virginia proved exactly that.

The Miami Hurricanes opened the game in possibly the most dominant fashion: two passes, one touchdown.

But after that first drive, the Hurricanes struggled to get first downs and convert in the red zone, yet they still managed to grind out a 19-14 win over Virginia, last year’s ACC Atlantic Division champion.

“Virginia was making it tough, but we weren’t getting points in the red zone. That’s Miami – Virginia. I don’t know how many years in a row, it seems like it’s really hard to score 20 points.”

The star of the game was senior receiver Mike Harley, who had a career high 10 receptions for 170 yards and one touchdown. After the starting receiver position was put up in the air this week, Harley and some of the veteran receivers responded well.

“Coach made it a challenge and me being the oldest guy, I had to step up and stay consistent,” Harley said.

Mark Pope had three receptions for 48 yards, including a spectacular 38-yard catch in the first half where Pope just got his foot down before falling out of bounds.

“It felt like Harley, Pope, Wiggins made not just good plays, they made great plays, which really spurred us on.”

As a team, Miami put up 444 yards of offense, much of which was accounted for by King. The graduate transfer quarterback finished completing 21 of 30 passes on 322 yards and one passing touchdown.

Miami struggled with it’s run game in the first half, but tore it up on the ground in the second half behind freshmen Don Chaney, who scored Miami’s second touchdown of the game in the fourth quarter. Chaney finished with 10 carries for 43 yards and a touchdown while freshmen counterpart Jaylan Knighton had 37 yards on 12 carries. Junior running back Cam’Ron Harris, who usually receives the most carries of the running backs, had just eight yards on eight carries.

With four red zone attempts, Miami converted a touchdown on one of them, made two field goals and had one field goal blocked. Jose Borregales’ blocked field goal was his first missed field goal this season.

“I thought they matched up some things well, I think we missed some things. We gotta watch the film and see if we capitalize on those opportunities, it would be a different game,” Diaz said on how his team performed in the red zone.

The Canes had some noticeable absences from the game, most noticeably junior tight end Brevin Jordan, who missed last week’s game with a shoulder injury. With a bye next week, Jordan will have plenty of time to rest before Miami travels to face NC State in two weeks. There were also six freshmen (Corey Flagg, Tyler Van Dyke, Michael Redding III, Brian Balom, Xavier Restrepo and Elijah Roberts) listed as unavailable for the game, to which Diaz could not give any information about.

Safety Amari Carter also missed the majority of the game after the senior safety was ejected for targeting on Virginia’s first offensive drive of the game. Carter has now been ejected twice this season for targeting.

Regardless of the semantics of the players and their performance, Diaz put some perspective on it by reminding everyone that the Hurricanes are 5-1 for the first time in a long time.