Home » No. 11 Miami hopes to overcome “mediocrity” against banged up Virginia

No. 11 Miami hopes to overcome “mediocrity” against banged up Virginia 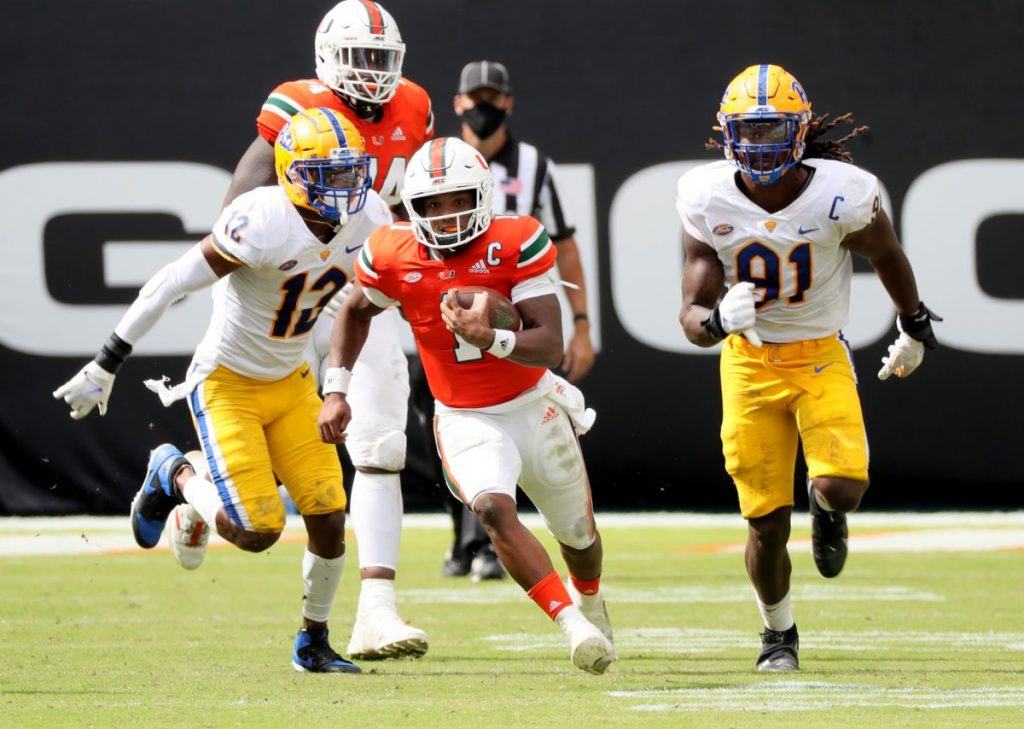 As much as Pittsburgh was a test of resiliency for the Miami Hurricanes, facing Virginia (1-3, 1-3 ACC) will be an even taller task, but not in the traditional sense. The Cavaliers are 1-3 this year and their starting quarterback Brennan Armstrong is questionable with a concussion.

Miami (4-1, 3-1) head coach Manny Diaz spoke about the “gravity of mediocrity” this week and how easy it is to be sucked into being mediocre.

Week in and week out Diaz has constantly reminded his players how difficult it is to win a football game and Saturday night against Virginia will be no different, despite Virginia’s poor track record this year.

“No one’s records walk onto the field with them. It’s just Miami-Virginia. Their guys versus our guys and the team that protects the football, scores in the red zone, tackles..will determine a winner and loser,” Diaz said.

Virginia has struggled so far this year in many facets of the game, but their biggest struggle from last game was at quarterback. With Armstrong out against Wake Forest in the Cavaliers last game and no clear favored back up quarterback, Virginia coach Bronco Mendenhall used a three-quarterback rotation featuring senior Lindell Stone, graduate transfer Keytaon Thompson and freshman Iraken Armstead.

Stone, who stands at 6’0 and 240 pounds, made his first career start at Wake Forest and completed 24 of his 42 passes for 193 yards, two interceptions and no touchdowns. The 6’4, 215 pound Thompson didn’t throw a pass but rushed 10 times for 71 yards. When Thompson was in the game, the Cavaliers ran more of a wildcat offense. Armstead, the most athletic of the three, went 1-3 on passes for nine yards, but had one rushing touchdown on six carries for 46 yards.

“We’ve got to prepare for the Virginia offense that we’ve seen in some version of for the past five years, we’ve got to prepare for what they showed at Wake Forest and then kind of been able to anticipate how they can expand those guys,” Diaz said. “I expect that we’ll see something we haven’t seen and we’ll have to adjust to it during the game.”

Virginia’s most dangerous offensive weapon is receiver Billy Kemp IV. Kemp, a 5’9 junior, currently ranks No. 1 in the ACC and No. 5 in all of college football with an average of nine receptions per game and 36 receptions this season, the most by a UVA player through four games in a season.

The Cavaliers also have a tremendous amount of size on offense, with NFL draft prospect, senior tight end Tony Poljan and freshman receiver Lavel Davis both standing at 6’7. Poljan ranks fifth in the nation with 18 receptions this season.

In addition to quarterback, another area where Virginia struggles is in their defensive secondary. Two starting safeties and the starting quarterback for the Cavs are all questionable to play against Miami after they went down with injuries against Wake Forest.

Against the Deacons, UVA gave up six plays of 30 yards or longer, which should help Miami because the Hurricanes offense relies on big plays to score points. The Cavaliers are allowing an average of 34.8 points per game this season. This could finally be the game where Miami quarterback D’Eriq King and his receivers are able to connect and find an offensive rhythm, specifically on the deep ball.

For Miami, tight end Brevin Jordan is the only player who’s questionable to play on Saturday. Jordan suffered a shoulder injury against Pittsburgh and Diaz has not said whether Jordan will be available for the game. Offensive lineman Jarrid Williams, who was limited against Pitt with a hand injury, took more reps in practice this week and should be good to go for the game.

Miami is a 13.5-point favorite in the matchup that is set to kick-off at 8 p.m. at Hard Rock Stadium and will be broadcast on the ACC Network.

The dean and future of the College of Engineering: Aerosol scientist and engineer Pratim Biswas
Live Blog: No. 11 Miami vs Virginia