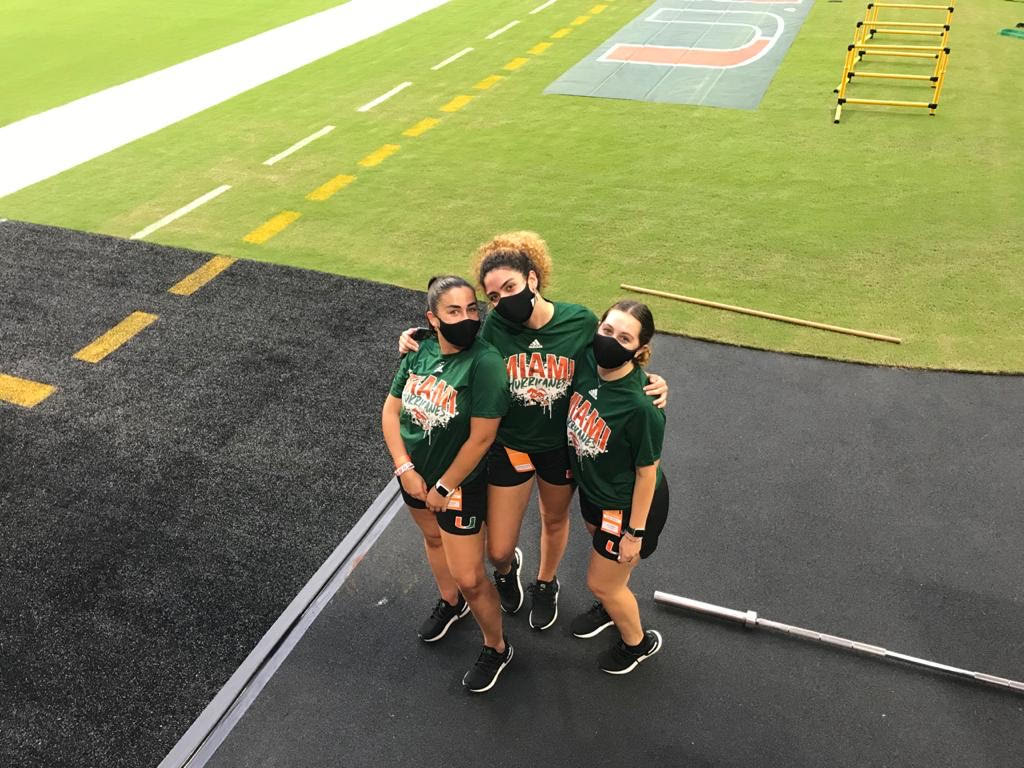 There is no question football is a male-dominated sport.

If you study the field hard enough, amidst sweaty linebackers and pacing coaches, you may find signs of female life. They’re tough to spot, because in a sea of almost 150 players, coaches and equipment managers in the Miami Hurricanes football program, there are very few women.

Out on the field in the blazing sun, hours prior to kickoff, Chyna De La Torre stands between two centers, handing them footballs to snap to the quarterbacks as footballs are whizzing past her head. Laura Sauer scampers across the field, setting up orange cones for warm-up drills. Elle Wigder lingers on the outskirts of the linebackers, passing a football back and forth between her hands. Vikaya Powell signals to a running back to throw her the ball he just caught from a quarterback.

These four women are student equipment managers for the football team. The remaining seven people that have this position this year are men. Without them, the most popular and lucrative sport at Miami would not be able to function.

At 7 a.m. on any given weekday, De La Torre and the others are inside the Hecht Athletic Center setting up for practice. They begin laying out helmets, shoulder pads and practice jerseys.. They retrieve practice equipment — cones, sleds, mats — for drills. By contrast, D’Eriq King, the starting quarterback, and company are just arriving at the facilities. For these women, the day starts before the players get there. Around 8 a.m., the women attend individual meetings with their position groups, where they soak up any football knowledge they can. After a two-hour practice, the women clean up the field and do the player’s laundry, lots and lots of laundry. And then the student equipment managers head to class, because like the football players, they are also students.

“We are literally student-athletes,” Powell, a graduate student, said. “We have to be up with them or before them and we leave later than them.”

The hours are long and the work is strenuous at times, but all four women got involved with equipment management because of their desire to work in football.

De La Torre, a senior, wasn’t sure what being an equipment manager was, but she was interested enough to reach out to the head of football operations at UM, who directed her to her now boss, Sam Nichols. Nichols called her in for an interview and hired her on the spot.

“I like to think of it as a privilege that I get to be here and to be given such a responsibility over other men that could have been chosen in an interview,” De La Torre said.

Student equipment managers are selected like any other job — you apply and get called in for an interview. Questions range from how organized you are to how you would solve specific problems within the team. Quite a few people apply each year to be a student manager.

Wigder, a junior, worked in the marketing department her freshman year when she had a conversation with a former football equipment manager about the position. It piqued her interest so when she saw a job post for it some time later, she applied. As a sophomore, Sauer is in her first semester as an equipment manager and was persuaded by De La Torre to apply for the job. Powell, meanwhile, is a graduate student working towards a masters in sports administration. She came to Miami with the intent of working with the football team and wants to pursue a career in football equipment management.

These women are keenly aware that they are part of a small circle of women working in college football. Aside from each other, the only other women on the UM sidelines during games are athletic trainers, so you can imagine how excited they get when they see another woman doing the exact same thing for the opposing team.

Last year when Miami played Virginia Tech, De La Torre saw a familiar face on the other side of the field. In a gaggle of eight student equipment managers, one lone woman.

“I was like, ‘damn girl, you’re killing it.’ I was just so happy that there was a girl in there,” De La Torre said.

These women love what they do regardless of their gender. In fact, they never really thought about it until the day a football came into play. For Powell, the football was placed in her hand by a position coach.

“I said, ‘coach, I’m not a little girl, throw me the ball. I can catch it.’ And once I told him that, he started throwing me the ball. He said, ‘oh, you really can catch,’” Powell said. “The same thing you expect from a man on the job is the same you should expect from a woman.”

For De La Torre, the mere fact that she can throw a football around with a bunch of Division I football players is pretty cool.

“I like to think of it as I’m a woman and this is a man’s field and I’m here literally catching footballs. It’s so cool when the players are like ‘damn Chyna, you can catch a football.’ It feels very empowering,” De La Torre said.

“It’s pretty cool that they act like we are equal,” De La Torre said.

Because of the countless hours spent at the football facilities, they consider most of the players to be like brothers. The coaches too, are supportive of the women off the field.

“We are like a family. We try to be there for each other,” Wigder said, “If you’re struggling with something, from bosses to managers to coaches too, we all care about each other.”

But the biggest bond they have on the field is with one another, as women working in a male-dominated industry. And they want nothing more than to see what they do become the norm.

“I want people to know that women in sports, they do way more than what people care to think and that’s why I’m trying to get my foot in the door, keep it there and make a stand,” Powell said.

On the chopping block: Healthcare, Roe v. Wade, marriage equality
The dean and future of the College of Engineering: Aerosol scientist and engineer Pratim Biswas