Home » Wide receivers put on notice, Lashlee continues to produce and why there are no energy vampires this year

Wide receivers put on notice, Lashlee continues to produce and why there are no energy vampires this year 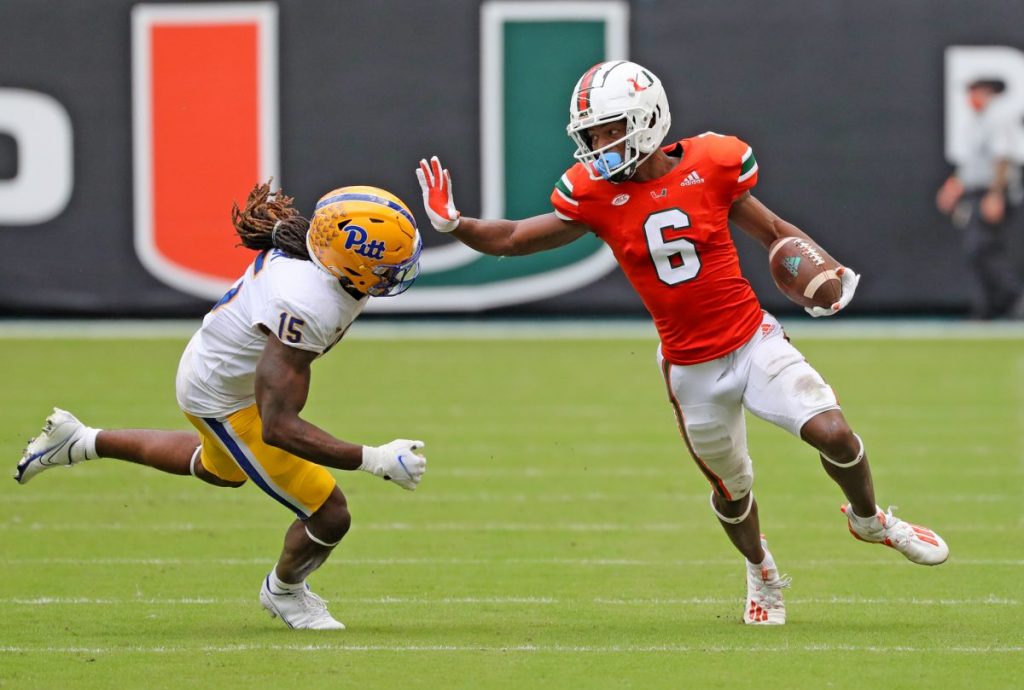 No matter how poorly certain players or position groups played against Pittsburgh, the mere fact that Miami beat Pittsburgh is a huge step in the right direction for the program.

After a devastating loss at Clemson, last year’s Miami team undoubtedly would not have been able to pull themselves together and beat Pitt. But this year’s team had just the right personnel to grind out a much-needed win that should put the Hurricanes on track for the remainder of the season. However, that doesn’t erase the serious issues that need to be taken dealt with, starting with the wide receivers and their contribution to the lack of offensive rhythm.

Offense is completely out of rhythm, but it could have been worse

Since the Clemson game, Miami’s offense has appeared entirely out of rhythm. The Canes only scored one offensive touchdown against the Tigers, and against Pitt on Saturday, despite the win, the offense did not seem to be playing much better as a unit.

The biggest reason for this is because of Miami’s receivers. The Hurricanes’ weakness at receiver was exposed during the Clemson game and those players have continued to struggle.

One of the most noticeable absences in Miami’s offense is the deep ball. Against Pitt, Miami only attempted three passes of more than 20-yards past the line of scrimmage. The intended targets of those passes were Dee Wiggins, Keyshawn Smith and Jeremiah Payton. D’Eriq King’s throws to both Wiggins and Smith were right on target and both receivers dropped the ball.

“We just have to keep swinging. Hopefully those things are going to start to connect and when they do, I think you will really start to see that open things up for us offensively,” Lashlee said on Monday.

But clearly the coaching staff has seen enough to address the receiver situation. The depth chart for Miami’s game against Virginia this upcoming Saturday did not list any individual receiver as a starter. All nine receivers were listed as “OR.” Diaz downplayed this move during Monday’s press conference, but there is no doubt that all receivers have been put on notice and hopefully this can fuel the receivers to produce a higher level of competition.

On TV, Miami’s run game against Pitt seemed to be stymied, but on paper, the numbers actually look positive. Pitt came into the game giving up an average of 52 rushing yards per game, which ranks second in the nation. Including King’s 52 rushing yards, Miami racked up 148 rushing yards and a net total of 109 yards. Cam’Ron Harris had 34 yards on 12 carries, Jaylan Knighton had 25 yards on seven carries and Don Chaney had 20 yards on five carries.

At the end of the day, Miami faced one of the best defensive fronts not only the ACC, but in the country, and the Canes still managed to score 31 points on four touchdowns. If Canes fans are wondering how they were able to score four touchdowns, there is one man who deserves all the credit.

An offensive player cannot be more open downfield than Cam’Ron Harris and Will Mallory were on their touchdowns against Pitt. The Hurricanes would not have defeated Pitt if it weren’t for those big touchdown plays.

D’Eriq King continues to target his running backs, this time connecting with Cam’Ron Harris on a touchdown. pic.twitter.com/xo1OKcJ7fB

“Coach Lashlee deserves a lot of credit for drawing up those plays,” King said after the game.

King also deserves some of the credit for his incredible ability to fake the run, which he did so convincingly on Harris’s and Mallory’s touchdown. He was able to draw the defense towards him, allowing for Harris and Mallory to escape up the middle and slip behind the defense before and catch King’s pass right over the top.

“When you got a play like that, it really sets you up to be open,” Mallory said. “You’re wide-open so it’s pretty easy, you just walk right in.”

🙌🏻TOUCHDOWN🙌🏻 For the 2nd time today, D’Eriq King hits Will Mallory right over the middle for a WIDE-OPEN TD!!! (13) Miami leads Pittsburgh 28-19 heading into the 4th Qtr. pic.twitter.com/eJqXyXzAvV

Those plays were the reason why Miami was able to put points on the board and ultimately win the game.

In football terms, an energy vampire is someone who sucks positive energy out of a team. And thankfully, Manny Diaz is not seeing any of them on this year’s sidelines.

Diaz praised his team Monday for the positive energy they have maintained on the sidelines, especially during difficult situations and without fans to rally around.

“It’s not just visible positive energy that you might see, it’s avoiding the negative energy,” Diaz said. “And I think that’s been an issue in the past of having the energy vampires on your sideline. Those guys are magnified in 2020 because you don’t have just the chaos of a full stadium. We have had really good sideline energy.”

“Even in the Clemson game, you’re getting your butt kicked, but there’s no pouting and there’s not guys getting after guys. There’s just none of that. This is where D’Eriq helps a lot”.

Diaz knew Pitt was going to be a test of the attitude and leadership of his team. They passed the test. There was a specific moment during the Pitt game where he knew his team’s resilience and effort was going to propel them to win.

In the third quarter, after King threw his second interception and Pitt scored to lessen Miami’s lead to 21-16, Miami got the ball back on offense and was forced to punt.

“And there it is. It’s in the balance. Momentum is definitely on Pitt’s side. Kind of dead in the stadium. Our guys, we were on defense getting ready to take the field, and our guys were excited to play,” Diaz said.

And the biggest motivator on the sideline in that moment was graduate defensive end Quincy Roche, who played his best game as a Hurricane against Pitt.

Also, no surprise — Quincy Roche (@_Underated2) has a dominant performance against Pitt, including his highlight-reel strip-sack of Joey Yellen. pic.twitter.com/0Yi3RNOMfb

“I thought Quincy, for as good as his play was on the field, what he did on our sideline, was unbelievable,” Diaz said.

Roche told his players “Let’s go, this is our chance.” And ironically, it was Roche and fellow defensive end Jaelan Phillips who came up with a strip sack on that drive, which gave Miami great field position on offense and allowed them to score a few plays later.

From then on, the Hurricanes were in complete control of the game. So, while the team’s performance against Pitt was good enough for a victory, there are obvious and pertinent areas of improvement that need to be fixed. But a win is a win and the Hurricanes are now 4-1 as they prepare to host Virginia on Saturday.