Miami in the NFL: Week 6 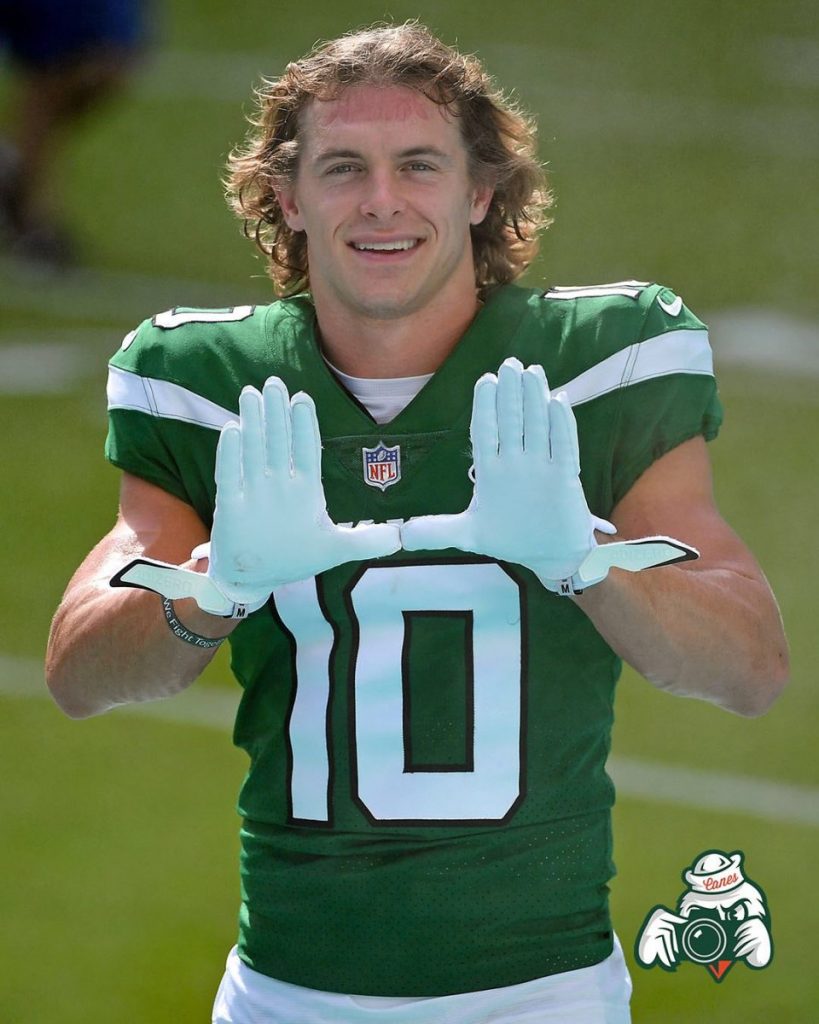 Former Cane and current Jets receiver Braxton Berrios throws up the U during the Jets' game versus the Dolphins at Hard Rock Stadium in Miami Gardens, Florida on Sunday, Oct. 18. Berrios had one reception for 18 yards in the Jets 24-0 loss. Photo credit: Twitter, @canespix. Photo by Jasen Vinlove

Week 6 of a fluid and unpredictable season is in the books. Contenders in the league are beginning to separate themselves from the pretenders. A number of the major franchises continue to struggle, and offense continues to be in abundance.

The Jets are one of those struggling, big market teams. Sitting at 0-6, to say head coach Adam Gase is on the hot seat is like saying fire is hot.

But New York’s loss Sunday was significant for three of its players, as its Hurricane trio returned to South Florida for a matchup against the Miami Dolphins. The ‘Fins won 24-0 at Hard Rock Stadium, but likely future Hall of Fame running back Frank Gore led the Jets with 46 yards on 11 carries. Wideout Braxton Berrios caught a single pass for 18 yards, while tight end Chris Herndon didn’t log a stat.

It was a busy day for former Hurricane defensive ends, of which Miami has a nation-high seven.

The performer of the day in this group was Baltimore Ravens end Calais Campbell, who recorded five tackles, four of them solo along with four total tackles for loss, with three of those being sacks of Eagles quarterback Carson Wentz. Campbell’s day was a big part of Baltimore’s 30-28 win at Lincoln Financial Field.

“It felt pretty good to go out there and compete,” Campbell said. “They [Philadelphia] fought hard, you know they’re a desperate team at home. You got to take your head off to them, because Carson [Wentz] wants to make some plays, but you know our DBs…were locked in and it just felt good you know to get out there.” Campbell credited his team’s secondary for their tight coverage of Eagle receivers, giving time for the front seven to make plays.

Elsewhere among defensive ends, Al-Quadin Muhammad logged a solo tackle in his Indianapolis Colts’ 31-27 home win over the Cincinnati Bengals. Allen Bailey had three total tackles for the Atlanta Falcons as they won their first game of 2020; a 40-23 result at the Minnesota Vikings.

One of Bailey’s tackles was a sack on Kirk Cousins. Jonathan Garvin made three tackles including one solo in his Packers’ 38-10 loss at the Buccaneers. Denver Broncos pass rusher Anthony Chickillo sacked Cam Newton in an 18-12 road win at New England Sunday and Olivier Vernon made three total tackles for the Cleveland Browns in a 38-7 losing effort at Pittsburgh.

When practice squad players are taken into account, no NFL team has more former Canes than the Chicago Bears. And two players in the Hurricane delegation in the Windy City had especially productive afternoon at Carolina. Tight end Jimmy Graham caught five passes for 34 yards, while punter Pat O’Donnell had four kicks for a 44.25-yard average and a long of 54 yards. On the other side of the field, Panthers cornerback Corn Elder made four total and three solo tackles.

Bills safety Jaquan Johnson made a solo tackle in a 26-17 home loss to Kansas City. And lastly, running back Duke Johnson played a small but valuable role in the Houston Texans’ near come- from-behind win at the Tennessee Titans. Coming back from 21-7 down to have the lead for most of the fourth quarter, Johnson ran for nine net yards—and converted a first down with a ten-yard scamper.

Absentee voting: Why it’s so important
The argument for Amy Coney Barrett