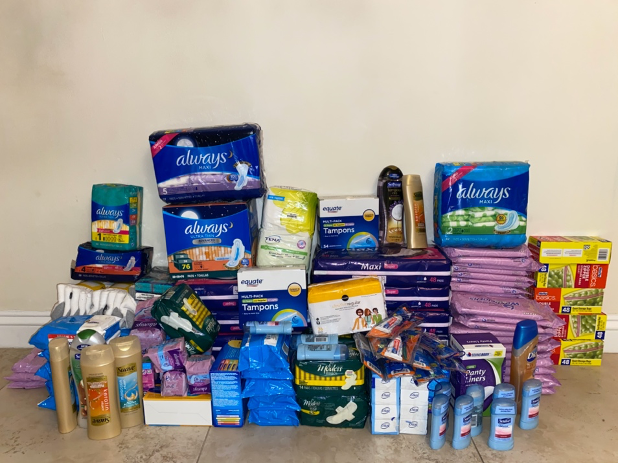 While volunteering on campus to make sandwiches and snack bags during the summer, the Tau Rho Chapter got inspired to collect personal care items after talking with homeless women about their needs.

“The first thing people think about when giving back to the homeless is making a ton of food, and while they were really grateful for that, they can’t even afford food, so what makes you think that they can afford sanitation products?” Mitchom said.

“The main point of the drive was to maximize the impact we could have on those homeless women locally, and we definitely exceeded the expectation we set for ourselves,” said Mitchom.

Items were collected at resident halls and the university center. The sorority also received monetary donations, which made it possible to purchase more products and packaging.

Tau Rho plans to do another drive once Covid-19 restrictions are lifted.

“The women were very grateful, some of them started crying,” Mitchom said of the group’s visit to the homeless shelter near downtown Miami. “It really showed how many resources they were lacking, and it provided a really inspirational light for us to be able to provide those resources by simply putting this drive together.”