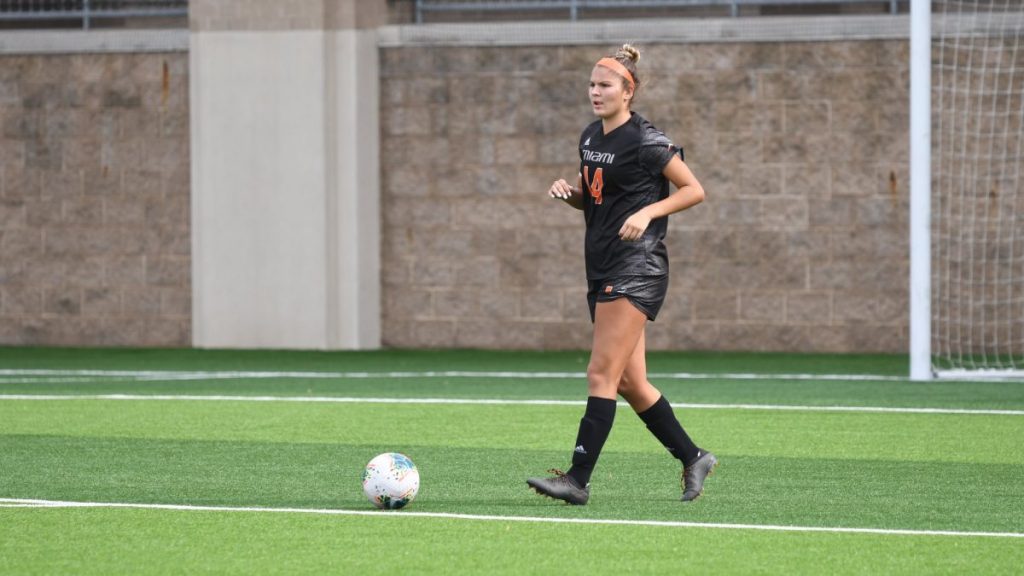 With two more matches remaining in the 2020 season, there is not much to say about the Miami Hurricanes, seven matches through Atlantic Coast Conference play. The Hurricanes sit at 0-7 and have been outscored 27-2 through those matches.

While they logged an important step in the first leg of their two-match road trip, results still aren’t present in the win-loss record and time is running out for that to change.

In Thursday’s match at the Virginia Tech Hokies, the Hurricanes did something they hadn’t previously done in their prior five matches of the 2020 season. They found the back of the net. Twice actually, for their first goals of the season.

Goals by Lexi Castellano-Mugica and Katarina Molina in the 33rd and 79th minutes were the highlights for Miami in Blacksburg. But on the other side, the Hokies scored a whopping eight goals of their own by seven different players in the 8-2 result. The Canes trailed by as much as 5-0 before getting on the scoreboard. It was the sixth loss in as many outings for a UM side that has struggled through the pandemic-altered Atlantic Coast Conference soccer schedule.

“As a team, we struggled to defend in the first half,” head coach Sarah Barnes said in a statement to Hurricane Athletics after the loss. “We need to be more aggressive. We have to be committed to win every ball in the box. This would’ve been an easy time to give up. I felt the team continued to battle through the second half. That is a positive we have to build on. The challenge we have to meet on Sunday is to come with confidence, to play aggressively and fight for the result.”

Miami’s issues continued with a 2-0 loss against the Pittsburgh Panthers on Sunday. Once again, UM couldn’t find the back of the net on an afternoon when the defense looked much improved after Thursday’s performance.

The sides remained scoreless through the first half. Even into the second half, UM looked like they may be able to hold on for at least a draw, in spite of being outshot 24-8 and 8-2 on attempts on target.

However, a 67th minute goal by the Panthers’ Kate McKay ended any hopes for a point in the standings. A goal from Amanda West in the 78th put the match fully out of reach for Barnes’ team.

Miami has two matches left on its schedule, both at Cobb Stadium, where they’ll play for the first time since Sept. 20. They’ll host Syracuse first on Oct. 29 at 7 p.m. before finishing the 2020 campaign against Duke on Nov. 1 at 3:30 p.m. The latter of the matches will be televised on ACC Network.

How to stay spooky during Covid-19
United Nations Day to be held Oct. 22 at the Rock