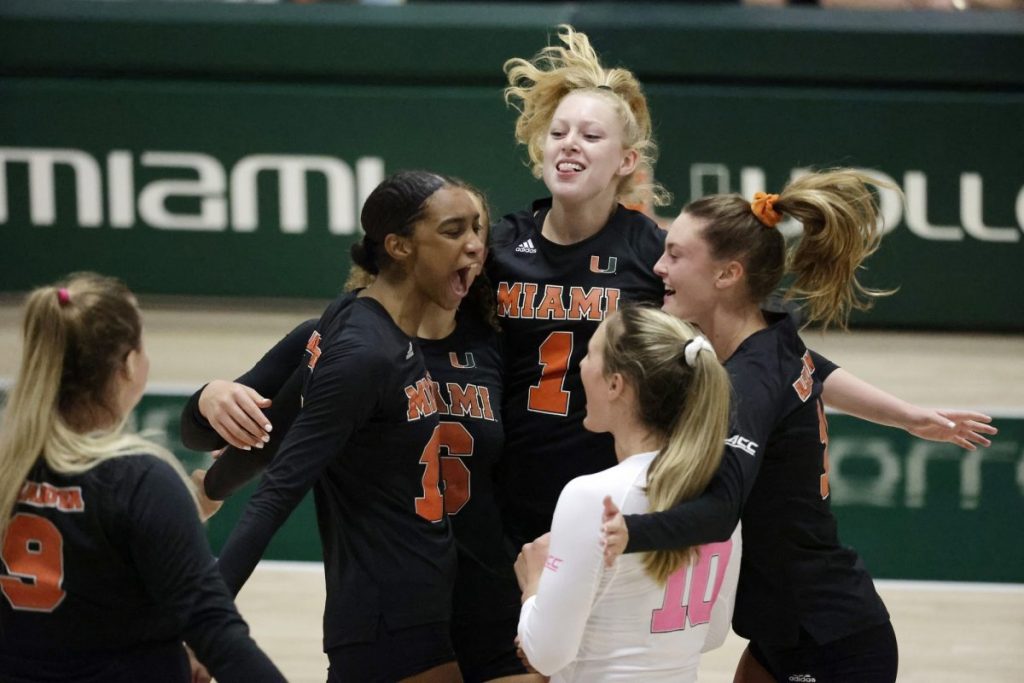 With a 3-0 victory over the Florida State Seminoles in the season finale on Friday, Miami volleyball (5-3, 5-3 ACC) concluded what has easily been the program’s best overall season in recent memory.

Heading into their final series of 2020 with a 4-2 record, the Canes were ranked at No. 11 by the American Volleyball Coaches Association (AVCA). While the honor was just a one-spot crawl up the leaderboard from last week’s No. 12 ranking, it represents Miami’s highest rank in program history.

Playing strictly against ACC opponents in 2020 only magnifies this incredible accomplishment by the Hurricanes. Last season, Miami went 6-12 versus ACC teams, but has now emerged as one of the many juggernauts in the conference.

Of the top 11 teams in the nation, Miami trailed four ACC rivals in the AVCA rankings prior to their series versus Florida State, despite being atop several statistical leaderboards. Miami’s Janice Leao ranked fourth in the ACC with a hitting percentage of .495, Elizaveta Lukianova led the conference with 116 kills and ranked third with 4.46 kills per set and Savannah Vach paced the ACC with 284 assists. Miami also led the ACC with 57 blocks and 39 aces.

After weeks on the road in which they went 3-1 versus Clemson and Wake Forest, the Hurricanes made their long-awaited return to Coral Gables to play their final pair of matches on Oct. 15 and Oct. 16 against Florida State. Despite dropping the series opener, the Canes were able to reward their seniors with a sweep over the Seminoles on Senior Day, holding tight to a record above .500 at 5-3 to close out the season.

The opening match between Miami and Florida State got off to a familiar start for the Hurricanes as they won their seventh straight first set by a score of 25-23. However, it wasn’t an easy set to run away with as the Canes had to overcome nine tied and four lead changes before eclipsing the Seminoles. Miami’s 14 kills from Lukianova and Janet Kalaniuvalu matched Florida State as a team and proved to be enough for the Canes to take an early 1-0 match lead.

The second set mirrored the events of the opener for the majority of the match, with both Miami and Florida State trading points with each other. For Miami, Lukianova added six more kills to her line and Vach recorded 18 assists, but the Seminoles’ .400 hitting percentage overpowered Miami on defense. To close the set and even the match score, the Seminoles went on a 5-1 run to win 25-21.

By the third set, Miami seemed fatigued offensively, hitting at a match low of .250. The Canes played catch-up for most of the match and ultimately fell by a score of 25-19. In the final set, Miami kept Florida State within reach for much of the first half of the set, but a five-point rally from the Seminoles drastically increased the score margin. Backed by five service aces, the Seminoles took the match victory with another 25-19 set win.

Match 2, Oct. 16: Canes celebrate seniors with an impressive sweep over the Seminoles

Minutes after celebrating the team’s seniors on the court, the Hurricanes jumped to a fast start versus the Seminoles, winning the first set 25-20. The win solidified Miami’s perfect record in opening sets at 8-0, and put the Canes in a strong position early in the season finale. Leao led the way offensively with seven kills while adding two blocks to her line.

The second set was the most competitive of the contest as defense controlled much of the set’s narrative. While Miami was one point away from a set win at 24-21, the Noles rallied back to even the score. However, the Hurricanes scored two unanswered points to escape with a 26-24 win.

In the third and final set, Miami put together a handful of offensive rallies to dominate Florida State on the floor, highlighted by an early five-point tear that gave the Canes a 7-4 lead. Lukianova registered six of her 14 kills in the third set alone and Angela Grieve tallied four of her eight to lead Miami to a 25-19 win and the sweep.

The eight-match 2020 volleyball season may be over for the Canes, but what they were able to accomplish in such a short period is a testament to the work ethic and dedication of the team and coaching staff. The presence of Miami’s talented group of seniors will be missed, but it is undeniable that Miami volleyball has made significant strides to set a foundation of success for the program now and well into the future.