Home » No. 13 Miami bounces back behind King’s four touchdowns in 31-19 win over Pittsburgh

No. 13 Miami bounces back behind King’s four touchdowns in 31-19 win over Pittsburgh 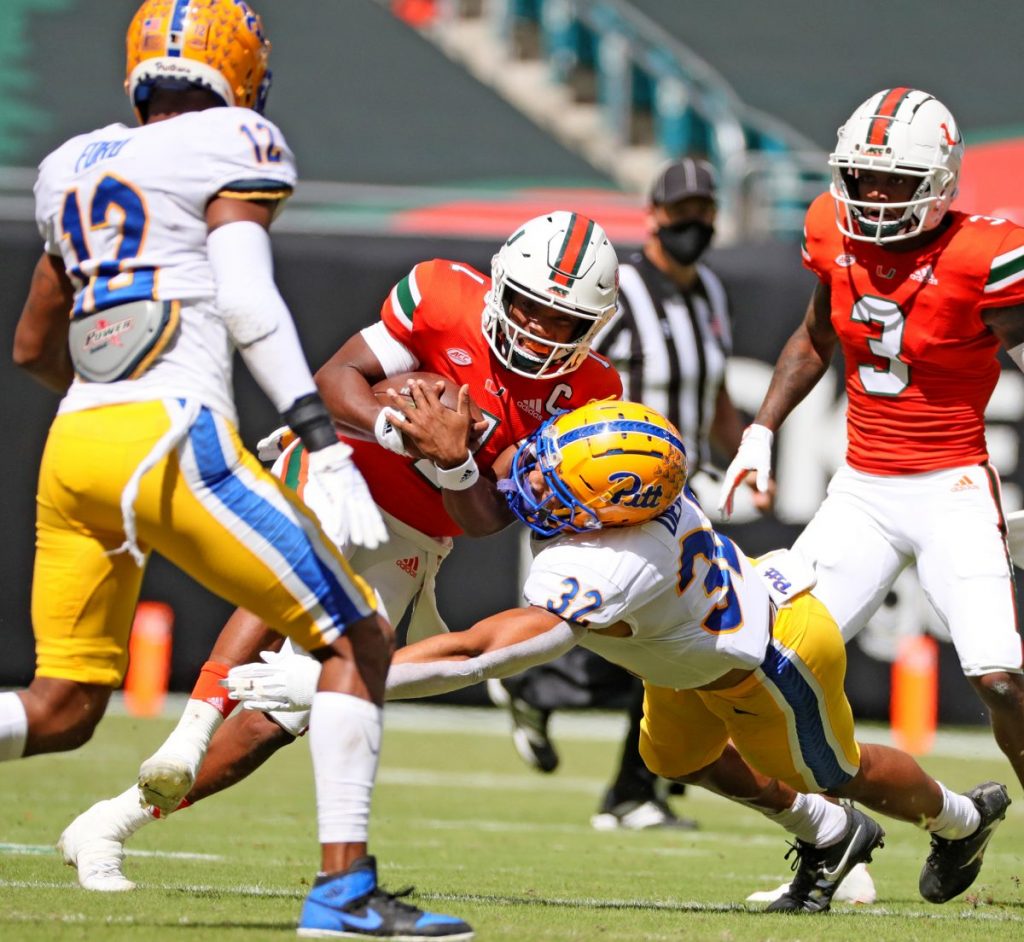 While it wasn’t a dominating performance by any means, the No. 13 ranked Miami Hurricanes managed to pull out a 31-19 win over the Pittsburgh Panthers Saturday afternoon.

“I thought D’Eriq threw some great deep balls,” Miami head coach Manny Diaz said. “I thought his accuracy was amazing. Everyone in the locker room knows D’Eriq is not going to back down. We are getting in the mix of hitting those shots. It’s going to be difficult, but his relentless nature inspires everyone on the offense.”

Pittsburgh was without their third-year veteran quarterback Kenny Pickett, who sustained an ankle injury in Pitt’s last game and did not travel with the team to Miami. In his place was redshirt freshman Joey Yellen. Even without Pickett, Pitt had 278 passing yards. Yellen finished 22-46 on passing with 277 yards and one touchdown.

“Pickett probably with his legs could have kept some plays alive,” Diaz said. “At the end of the day, it didn’t really make a difference in the plays they were running.”

Miami was also dealing with a loss from an injury. Tight end Brevin Jordan did not play after he suffered an upper body injury against Clemson. Without Jordan in the lineup, tight end Will Mallory stepped up in a big way for the Hurricanes. The junior finished the game with two touchdowns on two receptions and 51 yards. Both of his receptions were pretty wide open and Mallory credited the coaching staff for that.

“It’s really easy to score when you’re wide open and the scheme is that good,” Mallory said. “You’ll hit big plays like that if you do it exactly like you’re taught.”

Defensively, Miami did a good job of stopping the Panthers in the red zone and forcing them to kick field goals. Out of five red zone drives, Pittsburgh only scored on one of them.

“Red zone defense is a mentality and that’s where it gets to the culture you have in your defensive room,” Diaz said. “Blake Baker and the defensive staff deserve a lot of credit for that. Really proud of the way they went down there and never panicked and made them kick field goals. Ultimately that was the difference in the game.”

Graduate defensive end Quincy Roche played one of his best games as a Hurricane. In addition to wearing the turnover chain for the first time after recovering a fumble, Roche had four tackles for loss and four solo tackles. Redshirt freshman defensive tackle Jared Harrison-Hunte finished with two tackles for loss and one sack.

The Hurricanes got on the board first after Harris scored on a well designed, wide open 35-yard touchdown pass from King in the first quarter. Mallory’s first touchdown, a six-yard pass from King, made the game 14-0 early in the second quarter.

Pitt then executed two long drives down the field, but were forced to kick field goals both times to make it 14-6 at halftime.

Diaz was proud of the way his team played as a collective unit, something that they failed to do last weekend.

“The whole thing this week was trust your teammates and that’s why I was really proud of the way we played team ball,” Diaz said.”

Miami will have a week to prepare before they host the Virginia Cavaliers at Hard Rock Stadium next Saturday at 8 p.m.

Live Blog: No. 13 Miami vs Pittsburgh
Selling eggs is a ‘money-making machine’: UM student gets creative with paying tuition