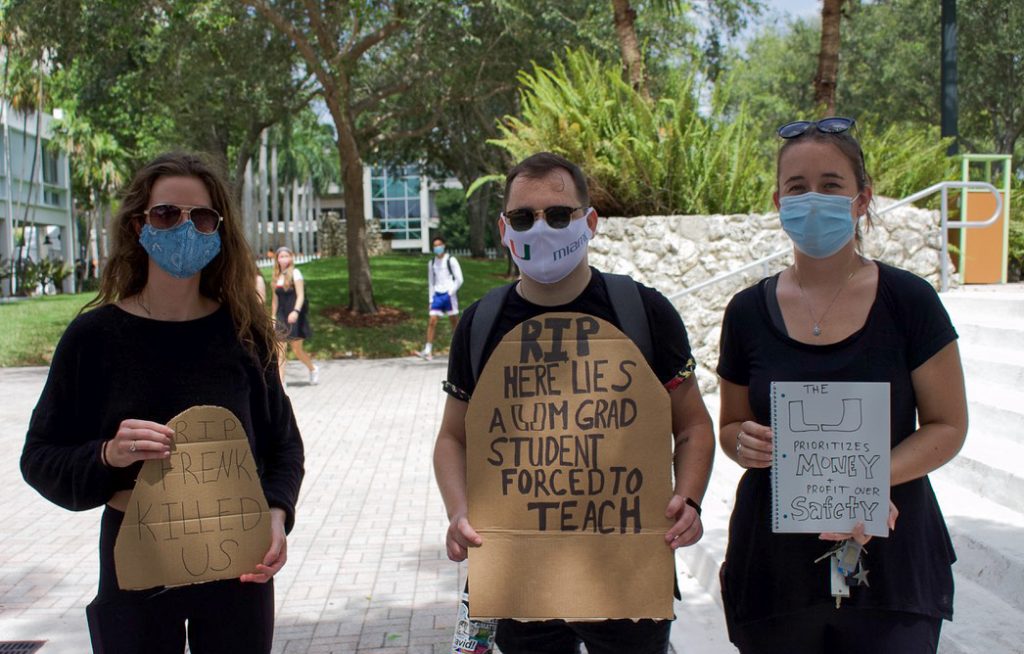 Protestors hold "gravestones" at in the Die-In protest on Sept. 4. Gravestones were used in place of chants while protestors remained silent. Photo credit: Ally Gaddy

After students participants in the “die-in” protest on campus on Sept. 4 were called into the Dean of Students office, the students wondered how they were identified. Associate Vice President for Student Affairs and Dean of Students Dean Ryan Holmes had mentioned the use of facial recognition technology, yet the University of Miami Police Department Chief David Rivero denied the use of such techniques.

Now, Fight for the Future, a nonprofit advocacy group specializing in digital rights, in conjunction with the University of Miami Student Employee Alliance, uncovered Rivero’s resume on the department’s website explicitly mentioning the use of facial recognition technology.

“One of the largest security projects added during Chief Rivero’s tenure was the creation of the new university-wide camera system (CCTV),” the resume reads. “The system now includes 1,338 cameras, recording 24 hours a day, and featuring video analytics which is the use of sophisticated algorithms applied to a video stream to detect predefined situations and parameters such as motion detection, facial recognition, object detection and much more.”

Because of these contradicting statements, members of UMESA are concerned over the university’s stance regarding surveillance.

“It’s concerning that the university doesn’t have a cohesive stance on the use of surveillance and there are the really obvious contradictions in what the police chief is saying and other members of the administration,” UMESA member Mars Fernandez told The Hurricane. “We would like for the university, specifically, President Frenk to hold an open forum to discuss community concerns and to join other campuses who are prioritizing privacy and have gone on record that they would never use facial recognition because of its privacy concerns and issues with misidentification.”

However, Rivero told The Hurricane that portion of the resume was written around 12 years ago to explain the newly installed camera system and its capabilities. Thus, he acknowledged it was misleading because it did not mean the department actually used those features.

Rivero said he has now updated the resume and emphasized the department only uses “basic police work” to investigate and identify criminals, dismissing the accusations of utilization facial recognition.

Additionally, in an interview with Distraction Magazine on Oct. 4, Rivero said the department has been successful in catching burglars using the Florida Department of Law Enforcement surveillance system.

“We were able to [easily] identify and arrest him’ through Florida Department of Law Enforcement’s facial recognition software,” the article stated. “We’ve [detected a few bad guys that way].”

Rivero contends the FDLE’s system is not facial recognition rather it’s a database to submit photos to catch possible criminals. The department would submit facial shots to FDLE to try and match it with someone who has been arrested and looks like the picture submitted.

“Let’s say, our camera system catches somebody stealing your laptop, and we have a good facial of that person, I can submit that facial shot to FDLE and they’ll try to match it to somebody that’s been arrested and looks like that picture,” said Rivero. “Usually, they come up with either 10 or 20 names and they’ll submit us the names with the pictures and say,’ look, our system was able to identify these 20 people that looked like your suspect.

Then, the department, Rivero explained, would conduct police work to investigate the list of names provided to see If they have a possible match.

“It is not really facial recognition; it is just comparing photos to photos,” said Rivero. “They have software that does that for them.”

After the student protestors were identified, they fear surveillance is used to monitor their actions as they are directly challenging the administration and its public health and economic responses to the pandemic.

“My other concern is in the case of just controlling campus community during a crisis,” said Fernandez, who was also identified as one of the student protestors. “We are concerned that the University of Miami because it hasn’t said it won’t use surveillance or doesn’t take a pro-privacy stance that they can easily use surveillance at any moment. That’s been a concern of faculty in terms of being forced to teach in the classroom and how they are being efficiently identified as well.”

Although a number of students expressed concerns over surveillance on campus and its greater implications, Rivero explained only a few cameras are monitored, especially in places where crimes would be more likely to occur. They are all designed to record and retain footage for possible video requests, which Rivero describes the policy to be very strict.

“There’s only like six or seven that we’re monitoring at any one given time, but all the cameras to record so if something bad were to happen, we can go back and forensically look at video footage to see if we could possibly identify what happened and who committed the crime,” said Rivero. “Why we have our camera system is for safety and security. It’s no different than the camera system that an airport has or a casino or other universities.”

“I was just kind of floored by the chief’s comments,” Greer told The Hurricane. “He’s literally describing facial recognition and then saying it’s not facial recognition. it seems like he’s trying to split hairs here by saying the university doesn’t do this; they just get other law enforcement agencies to do it for them.”