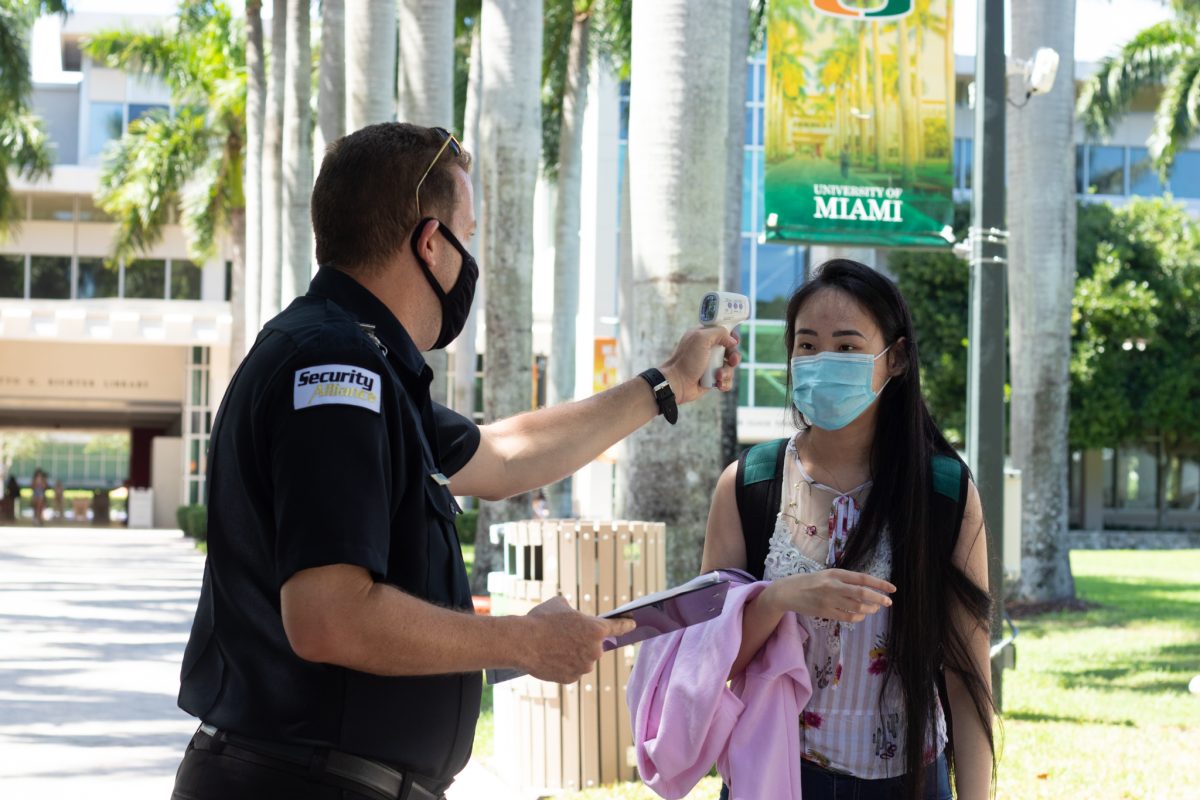 When freshmen came to the University of Miami’s campus for the first time they were greeted by classrooms filled with plexiglass barriers, signs reminding them to stay six feet apart from one another and masks everywhere they look. Although not how they pictured their first year on college, many are finding enjoyment in school nonetheless.

Coupled with the loss of traditional events associated with the end of high school, many incoming freshmen are skeptical about the future. In June President Julio Frenk announced that students would be allowed to return to campus for the semester, along with offering a remote learning option for students unable or unwilling to return to campus. Students were told they would not be permitted to change their selections.

Those who decided to come to campus were cautiously optimistic, such as freshman Caroline Moody, a political science and Spanish major.

“I was super excited, but there were some elements of it that were kind of concerning in terms of both health reasons and social life,” Moody said. “I was either concerned that it was going to be very little precautions and we were going to be sent home the first week or that it would be too much and it would limit the experience.”

Aware of the many risks associated with re-opening, UM announced a plan based on four pillars: testing, tracing and tracking, cleaning and disinfecting, protecting personal space and vaccinating. These pillars have guided UM’s rules and regulations for students and faculty on campus.

“I think that it has turned out really well and that the school has done a really good job at preventing any major outbreaks,” Moody said. “They have a lot of strict rules in place but they are also cognizant of the fact that we are young kids, we need to spend time with each other, and they are allowing spaces for that.”

Freshman Sebastian Borges, who is studying biology, echoed similar feelings. He said he was concerned that UM would have an outbreak and close within weeks of opening.

“I was really scared initially when I was moving in,” Borges said, who has asthma, which is a pre-existing condition categorized by the Centers for Disease Control and Prevention as high-risk for Covid-19. Borges said he was worried that he might contract the virus and transmit it to others, including his family that live nearby in Florida.

Last semester UM was among many colleges and universities across the nation who shut down and sent their students home to complete the remainder of the semester online.

A majority of students interviewed expressed satisfaction with the measures UM has implemented and are grateful about the fact that they are able to live on-campus. Felicia Nappi, a first-year student majoring in math, said she has enjoyed her time at UM so far.

“I was happy that we got the opportunity to meet people in person, go to orientation even though it was through remote events and just meet new people and see some of our professors face-to-face,” Nappi said.

Since the start of classes on Aug. 17, students have been asked to abide by different rules that are in place to prevent the spread of Covid-19, whether it’s wearing face masks, using daily symptom checkers or following curfews.

Students aren’t the only ones having to adjust. With three distinct course modalities, professors have also had to adapt their courses to accommodate the different types of students.

Associate professor of anthropology Ann Brittain is currently teaching “Introduction to Cultural Anthropology” and “Sex and Culture” on campus to students in the hybrid model. With students in the room having to wear masks, and students online with cameras turned off, Brittain said she has found it difficult to read and understand her students.

“I think it is okay, but far from ideal,” Brittain said, adding that it would be easier for faculty to teach in one modality, rather than being asked to do both.

She said she was concerned when it was first announced that students would be returning to campus for the fall semester.

“A lot of people are unwilling to keep themselves in their room or avoid crowds,” Brittain said. “Students are very interactive.”

However, she said she feels the results have been better than she anticipated.

“They did things I wouldn’t have thought of,” Brittain said. “They have gone through and made a lot of changes to the physical space, and they have created classrooms where none have existed before.”

While the community is adjusting to this unique form of education, some said they feel that UM could have better communicated what to expect when arriving on campus.

“I feel like the way they presented it was kind of deceiving because I felt like all of my classes were going to be in-person, but I’m only in class 50 minutes a week,” Nappi said. “I feel like they should’ve made that more clear, that a lot of the teachers were not going to be comfortable teaching in-person.”

While many students came back to campus for the fall, around 25 percent of the undergraduate population chose the fully remote option, according to an update provided by Frenk on July 28.

Bridget Craig, a political science major, opted to take classes online and is completing her fall semester from her home in Italy.

“I was scared that if I did go to campus, that they would send us home, and since I live so far away that it would just be a mess trying to get home,” Craig said.

Like Craig, freshman Rishi Desai, a biology major, also opted to complete his fall semester from his home in Florida.

“There was no point in going to campus,” Desai said. “A lot of stuff isn’t even open off-campus; there isn’t much to do right now. Just for my safety and the safety of others, I didn’t see any point at all in going to Miami.”

While this decision meant safety for Desai and his family, it also brought some disappointment.

“I’m not gonna be able to be on campus and get the full freshman first-semester experience,” Desai said.

By working at a designated study space and joining clubs, like the Indian Students Association, Desai has tried to mimic this experience from home.

“I’m really glad with how it’s going,” he said.

“Even though I’m doing online, I feel like I’ve been able to talk to some people about different things I might be able to join,” Craig said. “Surprisingly, I do still feel like I’m in the community.”

While this semester is not what incoming freshmen envisioned, Brittain noted the importance of enjoying the experience, no matter what it looks like.

“Have fun…find what excites you. Find the classes that you like,” she said.