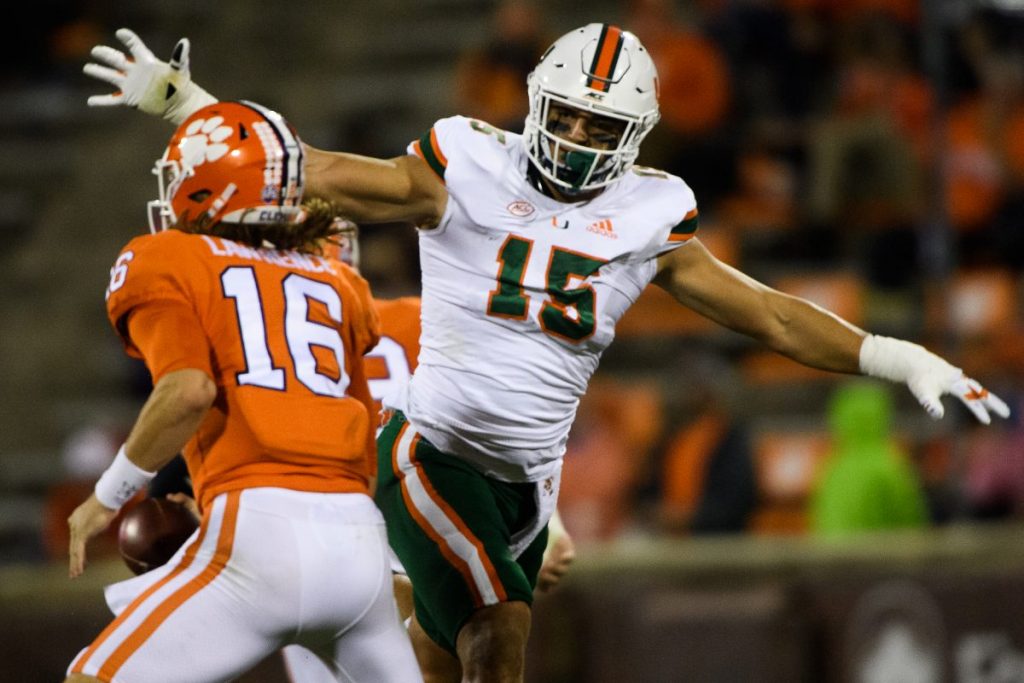 The Miami Hurricanes haven’t been afforded any southern hospitality in recent matchups against the Clemson Tigers. The University of Miami came into the contest having been outscored 96-3 in the two prior meetings with Clemson, and facing the No. 1 team Saturday had even the most optimistic fans keeping things in perspective all week.

But any hopes of an upset were quickly put to rest in the rain at Memorial Stadium in front of 18,885 socially-distanced fans. There were isolated highlights, but the nation saw that the Canes (3-1, 2-1 ACC) have a great deal of work to do before returning to college football’s elite.

“Congratulations to Clemson,” head coach Manny Diaz said. “They obviously thoroughly outplayed us tonight. We are very disappointed in the way that we presented ourselves.”

A slow start was too much to overcome for UM in a 42-17 loss. Despite a big special teams play that cut the deficit to 21-10 at halftime, the Tigers left little doubt in the second half and put the game essentially out of reach by the end of the third quarter. “A sobering experience,” as play-by-play announcer Chris Fowler described it in the fourth quarter.

Offensive coordinator Rhett Lashlee improved that side of the ball by leaps and bounds from a year ago. But fans can be forgiven if they thought Dan Enos was still calling the plays against Clemson.

College football has seen an offensive explosion this fall. But it didn’t translate for the Hurricanes at Clemson. UM had just five first downs going into the final quarter. They gained just 210 yards and went three-and-out five times. In Lashlee’s up-tempo scheme, the offense is reliant on itself gaining quick yards and turning those yards into quicker points. But it does no favors by forcing the punt team to come out faster.

“As an offense, executing just from all cylinders of offensive football tonight was our worst football,” tight end Brevin Jordan said. “We had a lot of mental mistakes. Some guys not getting out to the right blocks. Just all 11 men on the offensive side tonight, we just did not play our best brand of football.”

The running game was missing in action. Not only did Miami’s three-man backfield of Cam’Ron Harris, Jaylan Knighton and Don Chaney Jr. combine for just 11 yards, the trio received only 10 total carries. Without any consistency on the ground, the Tigers made the Canes one-dimensional early in the long night.

They say the best defense is a good offense. Facing highly touted quarterback Trevor Lawrence on the other side, UM needed to keep the ball out of his hands in order to have a chance. With so little going for the offense however, there was little the Canes’ defense could do to stop Clemson from scoring six touchdowns and gaining 550 total yards.

The point below explains many of the issues faced by both sides of the ball.

Struggles on third down

Third downs were a tale of two teams. And not in the way Miami wanted.

The Canes converted just four of their 15 offensive third downs, with an average of 9.9 yards to go on the money down. When King and company can’t move the sticks on third down, it leads to quick punts and a lack of any momentum on that side of the ball.

“Well, obviously, [Clemson was] very aggressive. We know that they have an outstanding defense. We just struggled to get the first down,” said Diaz. “We knew that making plays on the outside lanes of the football field was going to be a big key tonight. And we didn’t make the plays.”

Third down woes extended to the defense as well. Miami allowed the Tigers to convert eight of their 17 attempts when facing drive elimination. Clemson began the game 7-9 on third downa nd converted a fourth down on one of its failed conversions. Of those seven first downs, five came with eight or more yards to go.

There is not a way to recover from these stats, especially early in a matchup.

UM’s offensive line looked much improved from its 2019 self through three contests in 2020, allowing just two sacks and creating robust running space. That abruptly ended Saturday.

The Tiger defense logged five sacks and 11 total tackles for loss. Even when the Clemson front didn’t directly get to King, they forced errant throws, making the dynamic signal caller look static while completing just 12 of his 28 throws.

The run blocking also left plenty to be desired, with UM gaining just 3.6 yards for rush, and that includes a number of King’s long scampers.

“I think [Clemson] just played hard,” quarterback D’Eriq King said on the opposing defense. “They had a good plan. They execute well. So, hats off to those guys.”

The battle up front accurately reflected the talent gap the Hurricanes face against the perennial power they played.

The Hurricanes needed to play perfect if they wanted a chance to pull off the upset.

“I thought our discipline, in terms of doing things right, made it very difficult for us to execute against a top-ranked team on the road. We have to own that, we have to go back and watch the film tomorrow and see why it looked like the way that it looked,” Diaz said.

Miami lost a whopping 135 yards on 15 fouls, with many of these infractions being controllable, dead ball penalties. UM was called for three personal fouls on defense as well as an unsportsmanlike conduct penalty, including two targeting calls on Amari Carter in the first half and Keontra Smith in the second half for a hit on Lawrence.

An offsides and a holding call on Clemson’s first two drives occurred on a fourth and third down, extending a pair of possessions that resulted in touchdowns for the Tigers.

The Canes were outplayed on offense and on defense. But if there is anything positive to take away from the game, it’s the moments on special teams.

Miami blocked not one, not two, but three Clemson field goal attempts. A 62-yard attempt right before the half was deflected and taken back by DJ Ivey for a touchdown to trim the margin to 11 points.

Special teams have been a lingering struggle for the Hurricanes in recent years. So even in a sobering loss on a damp night, perhaps one major unit is on the upswing.

Miami to move on

The hunt to make the Atlantic Coast Conference Championship Game continues for the Hurricanes even with their first loss of 2020.

Miami will face the Pittsburgh Panthers at Hard Rock Stadium next Saturday and will follow with six consecutive conference games across the rest of the regular season.

Normally, the league is divided into two divisions and the top team from each side advance to the conference title game. In this fluid 2020 season, there are no divisions, with the top two teams overall going to the conference championship. The Canes are still very much alive in their quest to go to Charlotte, where they’d almost certainly face a rematch with Clemson.