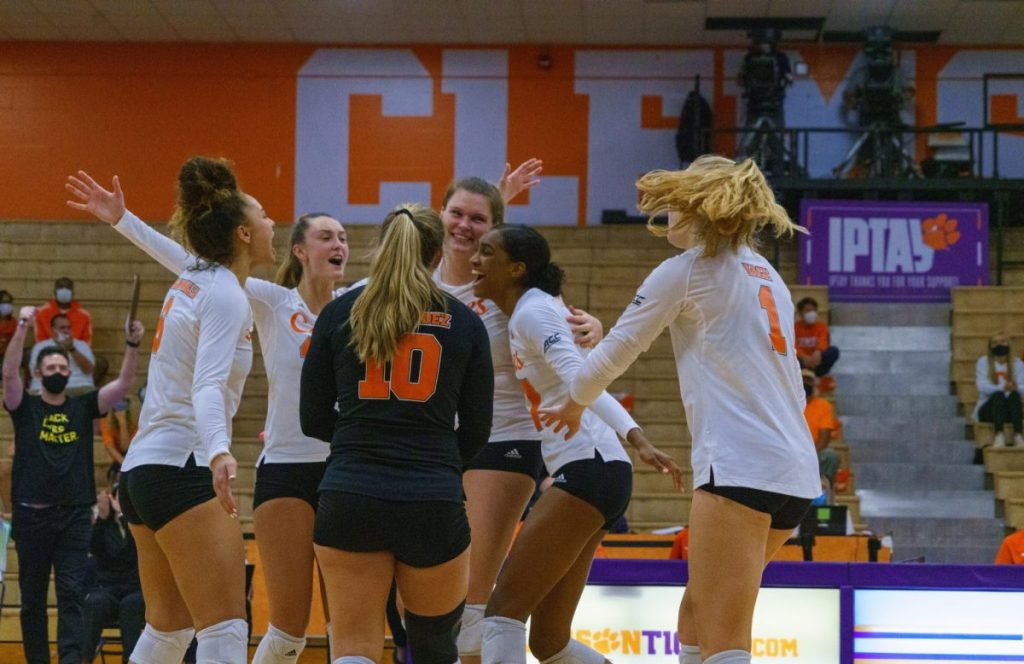 The Hurricanes volleyball team concluded road play for this season with a two-game set against Clemson in South Carolina. The Hurricanes split the road series 1-1 with the Tigers. The Canes lost the first match of the series in five sets, but rebounded and swept the Tigers in the series finale, winning each set by no less than six points.

Boasting an encouraging 4-2 overall record, Miami has seen dramatic improvements versus conference opponents between 2019 and 2020. In 2019, the Canes held a 10-16 overall record, but were 6-12 versus ACC teams. As a result of the NCAA’s ruling that all college volleyball teams will play conference opponents this season, the Canes were thrust into a category of teams they have struggled against as of late.

However, the task has not been daunting at all for the Canes in 2020. The Hurricanes were ranked 12th in the nation by the American Volleyball Coaches Association (AVCA) on Wednesday, Oct. 7, after a win against Georgia Tech in the opening series and two versus Wake Forest the following week. The honor marks the 16th time in program history that the Canes have been ranked by the AVCA and is Miami’s highest rank since 2011.

Prior to the series with Clemson, Miami led the ACC in kills, assists, service aces, total blocks and attacks. Now, with a win under their belt against the Tigers, the Canes have a chance to match last year’s win total against ACC opponents, assuming they sweep Florida State in their final series of the year.

As the Hurricanes head back to Miami with hopes of ending the season on a high note, here is recap of their road finale versus Clemson:

In the opening set, Miami and Clemson traded points back and forth. While the Canes ultimately won the set, backed by Lukianova’s five kills and Janice Leao’s three, Miami’s five service errors narrowed the score to an uncomfortable margin. Trailing late by 22-23, the Hurricanes capitalized on a service error and two misplays from Clemson’s Ashtynne Alberts and McKenna Slavik to win their fifth first set of the season 25-23.

However, Clemson surpassed Miami’s offensive intensity in the second set to tie the match at 1-1. While Lauren Tarnoff and Leao combined for eight of Miami’s 11 kills, the Canes played from behind the entire set and the Tigers’ 18 team kills overpowered Miami in a 25-21 set loss.

The Canes dropped the third set and fell behind 2-1 in a match for the first time all season despite taking an early three-point lead. Down 23-19 late in the set, the Canes made a rallying comeback to draw within one, but the Tigers closed out the game and registered the final two points to win 25-23.

In an act of desperation, Miami went on an offensive tear in the fourth set to dominate Clemson 25-14. Led by Lukianova’s 13 kills, Hernandez’s three aces and Savannah Vach’s 14 assists, Miami scored eight straight times to end the match with a 25-14 victory.

Unfortunately for Miami, Clemson claimed an early lead in the fifth set and never turned back, scoring four straight clutch points in crunch time to lead Miami 12-8. The Canes ultimately dropped the set 15-10, securing a 3-2 upset victory for the Tigers.

On the night, Lukianova’s 30 kills across five sets rank second in Miami history and Hernandez tallied a career-high six aces.

It was clear in the rematch between the Hurricanes and the Tigers that the Canes had a chip on their shoulder from the previous night. After losing a nailbiter to open the series with Clemson, Miami came to play with a vengeance in the series finale and swept the match 25-16, 25-18 and 25-19.

As has been the case all season long, the Canes opened the match roaring offensively to win their sixth first set in as many chances so far this season. A 19-16 lead by the Canes quickly erupted to a nine-point match victory with Leao behind the service line. On the set, Tarnoff registered five kills, Lukianova four and Leao three to guide the ‘Canes to victory.

The Canes amped up defensively in the second set and restricted the Tigers to a .047 hitting percentage with the help of six blocks and 22 digs on Miami’s defensive end. Highlighted by Hernandez’s set-leading nine digs, the Hurricanes took a decisive match lead over the Tigers at 2-0.

The Hurricanes will return back to Miami and take on Florida State at home on Oct. 15 and Oct. 16 to close out the 2020 season.