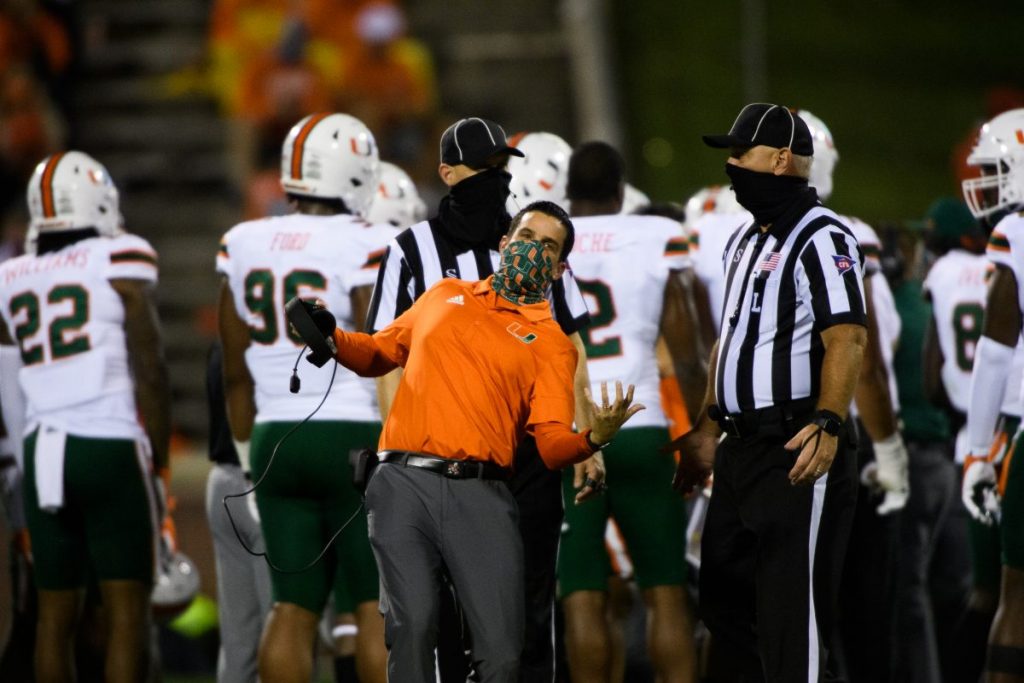 Head coach Manny Diaz reacts to a call on the sidelines during the first quarter of Miami's 42-17 loss to Clemson at Memorial Stadium in Clemson, South Carolina on Saturday, Oct. 10. Photo credit: Ken Ruinard/USA TODAY Sports

If the deafening sound of the Clemson fans cheering, albeit a significantly reduced crowd, is indicative of anything, it’s that Clemson is that good.

They put an absolute beating on the Hurricanes Saturday night at Memorial Stadium, coming away with a 42-17 victory.

And the Hurricanes did not do themselves any favors in the loss.

The offense looked out of sorts. The offensive play calling was questionable at best. And the lack of discipline was detrimental.

Miami racked up 15 penalties for 135 yards, the most penalties of any game this season.

“We are very disappointed in the way we present ourselves,” Miami head coach Manny Diaz said. “I cannot fault our effort but our discipline made it very difficult to execute against a top ranked team on the road and we have to own that.”

With just 210 total yards of offense, the Hurricanes had their poorest offensive output so far this season.

“That’s just about the worst we can play,” Miami quarterback D’Eriq King said. “A lot of that is on us.”

King completed 12 of 28 passes for 121 yards, zero touchdowns and two interceptions. Running back Cam’Ron Harris, who did not have a single touch until the six minute mark in the second quarter, had just eight carries for three yards. Tight end Brevin Jordan, who seemed to be Clemson’s focus leading up to the game, led receivers with three catches for 31 yards.

“They came out and played a great defense and we just have to learn to make adjustments,” Jordan said. “I think tonight’s game was a lot of mental stuff on our part. We left a lot of stuff out on the field. All 11 men on the offensive side today, we did not play good. We knew exactly what they were doing the whole game. We knew their defense. We broke down hours and hours of film. It was just mental tough on our part.”

The Hurricanes only scored two touchdowns. The first was on a field goal that Jared Harrison-Hunte blocked and DJ Ivey scooped up and returned for a touchdown as time expired at the end of the second quarter. The second was a seven-yard touchdown run by King in the fourth quarter.

Meanwhile, Clemson running back Travis Etienne had 149 rushing yards on 17 carries with two rushing touchdowns in addition to 73 receiving yards. Quarterback and future No. 1 draft pick Trevor Lawrence completed 29 of 41 passes for 292 yards and three touchdowns. Lawrence also ran for a touchdown. As a team, the Tigers generated 550 total yards of offense.

“Travis Etienne is the guy,” Diaz said. “He’s as good as a player there is in college football. When he gets in the open field he’s just so dangerous. We’ve got to do better than we did. We were unable to take away what they do best and what their strength is on first down.”

Despite the offensive meltdown, Miami’s defense had a solid performance. Other than a couple of blown coverages, Miami had 72 total tackles, nine tackles for loss and one fumble recovery by Gilbert Frierson at the start of the second half. The defense also tied an FBS record with three blocked field goals.

But both safety Amari Carter and striker Keontra Smith were called for targeting, with Carter’s ejecting in the first quarter and Smith’s in the third. Smith’s targeting call was highly contested by the Miami sideline because it appeared that his helmet made contact with Lawrence’s stomach, instead of the head and neck area, which is what constitutes a targeting penalty.

“I’ve never seen someone hit someone in the stomach and get called for targeting,” Diaz said.

The first two quarters of play started off in a disastrous way for the Hurricanes. With Carter’s ejection and Gurvan Hall out for the first half because of his ejection from the Florida State game, the Hurricanes were left with Bubba Bolden and freshman Brian Balom at safety.

Also, the nine penalties for 70 yards in the first half hurt the Hurricanes tremendously.

Clemson tight end Braden Galloway scored two touchdowns in the first half and Etienne added a two-yard rush. Before Ivey’s touchdown, Borregales had Miami’s only points of the first half after he made a 42-yard field goal in the second quarter. Clemson led 21-10 at halftime.

The second half started out on a positive note after Frierson’s fumble recovery, but on Miami’s next possession, King threw his first interception of the game and of the season.

Etienne scored his second touchdown on a 72-yard rush up the left sideline after blowing past Miami’s defense. Shortly after, Smith was ejected for targeting and Lawrence scored a touchdown on a three-yard rush. Clemson tight end Davis Allen scored the last touchdown of the game on a 22-yard touchdown pass.

With Miami set to face Pittsburgh at home next Saturday, the Hurricanes will focusing on staying together as a team and preparing to face the Panthers.

“I like the way that our guys stuck together,” Diaz said. “We will build from this and put all of our focus into beating Pittsburgh next week.”

Live Blog: No. 7 Miami at No 1. Clemson
One-sided loss at Clemson shows that Miami isn’t back yet