Home » Players and coaches speak on challenges of facing Clemson, QB Lawrence, and how maturity is a key factor

Players and coaches speak on challenges of facing Clemson, QB Lawrence, and how maturity is a key factor 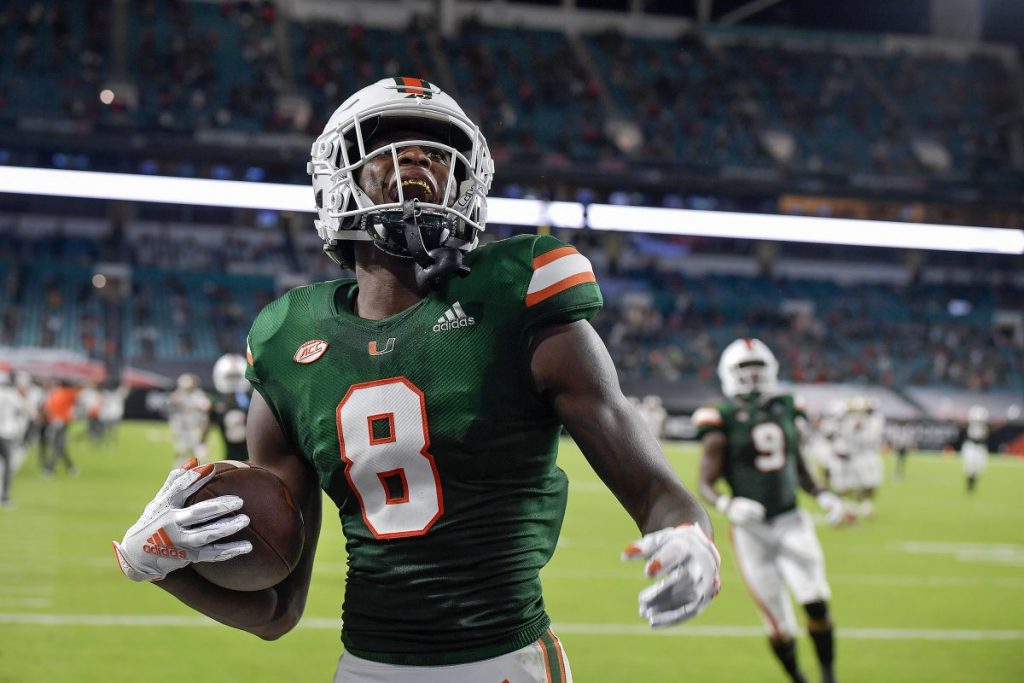 Wide receiver Dee Wiggins (8) celebrates after scoring a touchdown during the first half of Miami’s game versus Florida State on Sept. 26. Photo credit: Michael Laughlin/ACC

A lot has changed since Clemson beat Miami 38-3 in the 2017 ACC Championship, the last time the two teams played each other.

The Hurricanes are ranked No. 7 after starting the season 3-0 with wins over UAB, Louisville and Florida State.

The Tigers are the No. 1 team in the nation. They have made the college football championship game three times in the last four years and have the best quarterback in college football in Trevor Lawrence.

“Clemson has been the standard for the last several years,” Miami offensive coordinator Rhett Lashlee said. “They’ve earned everything they’ve been given and the respect that they have, they’ve earned it.”

This is undoubtedly the biggest game with the largest implications that Miami has played in at least the past year, but the challenges that they will face in Clemson are daunting.

Trevor Lawrence can do it all. His passing is phenomenal and he’s just as good as running, which makes him extremely dangerous on offense and very difficult to defend.

“He’s a problem, that’s the best way I can put it,” Miami defensive coordinator Blake Baker said. “The biggest thing is we have to be able to contest a lot of his throws. Even when you think you have a guy covering, he is so accurate that he is going to put the ball in there. He has such great arm strength and such great accuracy, just like an NFL quarterback. With his legs, that’s where he does a lot of his damage. Once he gets into the open field, he’s a load to bring down.”

Lawrence led the Tigers to a national championship victory as a true freshman in 2018 and has been the star of the offense since then. This season, Lawrence is 55 of 75 for 848 passing yards, seven touchdowns and no interceptions. The 6-foot-6, 220 pound junior actually hasn’t thrown an interception since Clemson played Louisville in October of 2019.

.@Trevorlawrencee is celebrating his 21st birthday 🐅

“I think the really aggravating part is when you are doing a really good job in pass coverage and he’s got the ability to break away from a pass rush and either scramble to throw, he’s really good throwing on the run, or just tuck it and get a first down,” Miami head coach Manny Diaz said. “He eats up your angle because he’s got these long strides and finds a way to get out of bounds. It puts a lot of stress on your defense.”

Nonetheless, Lawrence is a formidable opponent that will be difficult to take down.

“We will have to be on top of our game on all three levels in order to beat him,” Baker concluded.

Maturity will be the key for Miami

One of the biggest differences for Miami this time around is that they have a definite sense of maturity on both sides of the ball on and off the field.

That starts with King, who has the experience of playing against big time teams in big time games from when he was at Houston.

“He’s a mature kid. He’s got that experience, so that was a big advantage for us,” Lashlee said of King. “That helps me as a coach.”

“It’s so valuable in a guy that’s been in some big stadiums and has played against some big opposition,” Diaz said.

Linebacker Zach McCloud also pointed out that the maturity spans throughout the whole team.

“We have more guys in more position rooms and [it’s] wide-spread. It’s not just one or two guys trying to lead the team.”

Having a mature team helps in a multitude of ways, especially against a team that is as dominant and confident in themselves as Clemson. If Miami falls behind at any point, having the maturity to hold themselves together will be instrumental in keeping the Hurricanes in contention.

This is just another game for Miami

Despite this being the most important game Miami has played in at least the last two season, the mind set from Coral Gables is that this is just another game. Diaz and his players have downplayed the severity of facing Clemson in what could be a program-altering game.

“It doesn’t really change the job, there is still a football game to win on Saturday,” Diaz said when asked how his team is preparing for Clemson.”I just think for the players and coaches alike, no matter what the hype that surrounds the game, it’s still going to be decided by the things that decide a football game.”

Diaz noted that for Clemson, this is not a big game at all because they are used to the spotlight of playing prime-time matchups. But he does believe Miami deserves to be playing in a game like this.

“You gotta earn the right to get into these games, which is what we’ve done over the first month of the season,” Diaz said.

Faculty and student protestors question UMPD surveillance efforts
The derailed train gets back on track: Analyzing the vice presidential debate