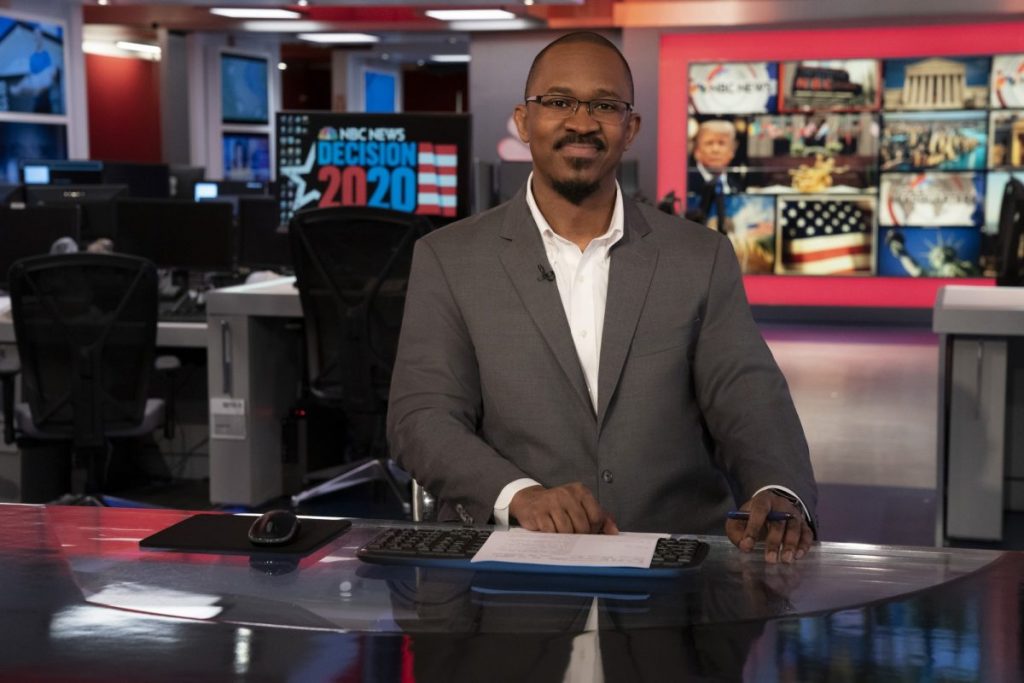 University of Miami alumnus Joshua Johnson now hosts his own primetime show on MSNBC, "The Week with Joshua Johnson," which airs Saturdays and Sundays at 8 p.m. Photo credit: Virginia Sherwood/MSNBC

Coming to the University of Miami, Joshua Johnson always had an interest in journalism but initially set that aside to pursue becoming a doctor. However, it was two years into his time at UM when Johnson realized he was destined for broadcast television. Now years after making that career change, 40-year-old Johnson hosts his own primetime-weekend show on MSNBC, “The Week with Joshua Johnson.”

“The decision was that there was nothing else for me to do,” Johnson told The Hurricane. “And so I just, you know, let go of all of my other plan B’s and poured all the energy in plan a, and so far, it’s been pretty well.”

Johnson, who was pre-med in addition to studying theater and motion-pictures, soon realized journalism is what brought him the most joy.

“I always knew I was passionate about it,” Johnson said.“I knew medicine would not make me happy. I knew the broadcasting would make me happy.”

Even when Johnson was a young boy living in West Palm Beach, he began thinking of a career in journalism.

“My decision to study at UM came after a long kind of life journey, as a kid tinkering with the idea, nosing around, knocking on doors of stations asking if they would just let me hang out and generally just being a pest and allowing myself to just get in the way and try to be visible,” said Johnson.

Thus, UM was a no brainer for him as it gave him the opportunity to explore his curiosity while also not being too far away from home.

“UM just allowed me to study everything I was interested in,” said Johnson, who majored in broadcasting and theatre arts. “It allowed me to just be nosy and try stuff.”

At UM, Johnson anchored the news at the student run-radio station WVUM 90.5 FM, worked for UMTV’s NewsVision and created his own game show on campus.

In addition to fostering his journalism growth, UM featured a diverse and international student body, which Johnson says he is grateful for. Johnson, who is Black and gay, made connections through a number of student groups on campus, including United Black Students and the group for LGBTQ students, which he said helped with his coming out process.

“One of my resident advisors at UM gave me one of the wisest pieces of advice I ever heard about coming out and that was ‘come out once,’” said Johnson. “Every time you encounter someone, or you’re in a new situation, you have to make that set of decisions all over again, so just brace yourself that this is a lifetime process and your answer will evolve as you grow as the situations change. I love that..it didn’t solve the problem, but it equipped me to answer the question for myself long after I left UM.”

It was that advice that Johnson said gave him insight into the journalist he wanted to become. According to Johnson, a great journalist should not provide all the answers to the public, but provide the means to better understand current issues.

“I am not the kind of journalist who’s always going to be able to just tell you what the answer is,” said Johnson. “What I can do is give you a way to think about the world that should equip you to deal with whatever comes.”

His own professors, including Paul Driscoll, the vice dean for academic affairs in the School of Communication, realized Johnson’s star potential while at UM. For Driscoll, it was an event in Storer Auditorium that revealed Johnson’s tenacity as a journalist.

“The speaker tried to dodge his questions, but Josh just kept coming at him with follow-up questions,” Driscoll told The Hurricane. “I remember thinking to myself that this young journalist wasn’t going to let up until his questions were answered. Even as a student journalist, Josh had a tremendous appetite for public affairs. It was clear he was going places.”

After graduating from UM in 2002, Johnson began his career in journalism as he worked in collaboration with Miami’s public radio station WLRN and the Miami Herald. Thereafter, he moved to San Francisco to work for KQED and hosted the nation-wide radio show “Truth Be Told,” which explored race in America. Then in 2016, he hosted “1A,” which is distributed by NPR, a public radio show inspired by the First Amendment, propelling him to become a top political analyst in the country and prompting him to later join MSNBC in November 2019.

After anchoring coverage of the effects of the coronavirus in Miami and hosting the hour-long broadcast about being Black and queer in America, MSNBC granted Johnson the opportunity to lead his own primetime, weekend show. He said he hopes to provide perspective and understanding to the constant flow of breaking news information.

“The goal of the show is to give people a place at the end of each week to just catch our breath, take stock of what happened, have our questions answered, make sense of it and then prepare for the next week,” said Johnson.

As a journalist of color, Johnson aims to provide perspective into the larger story regarding race in America and highlight different voices as the story continues to unfold.

“My job as a broadcaster, and as a journalist, is to try to provide that sort of perspective and to speak to where people’s heads and hearts are now. It’s not to tell people, ‘oh, calm down, things are better now than they’ve ever been.’ But to say, ‘your emotions are valid, your emotions matter,’” said Johnson. “So, for me to be a journalist of color now, it’s kind of great.. and being able to be here at this time, where that is emerging, where you can shape how that is implemented and how that is presented in our various platforms, is a gift.”

Johnson said he is excited about his new chapter at MSNBC.

“I think having 4 hours a week to try to put something new out there and to build these weekends is pretty incredible,” said Johnson. “Just the fact that there is this uncharted territory that we get to explore and hopefully claim that gets me out of bed before my alarm clock every day—there’s nothing more exciting.”

The Week with Joshua Johnson first aired on Sept. 19. You can watch Johnson’s show live every Saturday and Sunday at 8 p.m. EST.