Pop punk newcomer Zach Brandon on creating during COVID, plans for the future

“It’s not easy to create right now. You have to really believe that…this is going to blow over,” said rising pop punk star Zach Brandon.

We spoke via Zoom, and Brandon—from the safety of his Hollywood home—discussed creating during COVID, his entry into the music industry and his plans for the future.

According to the industry newcomer, quarantine can be stifling, making it a bit difficult to find inspiration.

“Some people…get to be home all day with no distractions. Then, there are other people who feed off of social interaction and feed off of the excitement of playing live,” said Brandon, who classifies himself as the latter.

Being able to perform live is one of his favorite things about being a musician, he said, and the hope of being able to do so again is what is keeping him motivated right now.

At only 24-years-old, Brandon is already being mentored by multi-Grammy winners Charlie Midnight and Jan Fairchild. The three of them make up an unbeatable team.

“We are like family now,” he said of the industry-heroes-turned-partners. And, according to Brandon, it all happened by chance.

After noticing Brandon playing at a show two years ago, Midnight immediately hopped on the opportunity to work with him. Brandon, having never collaborated with anyone before, was happy to become his protégé.

“I was ready to start advancing and growing, and it was the perfect time,” he said.

Working with two musical legends can be intimidating for artists, but Brandon caught on quickly, forming strong bonds and picking up lessons along the way.

“They are so experienced, and flexible, too…What gives them long term success is their ability to be malleable and flexible with the industry,” he said.

Clearly, this is one of the many lessons he took to heart. He has proven himself to be malleable and flexible within the industry, especially during these hard times. His debut single, “Tell Everybody I Don’t,” already has more than 220,000 hits on YouTube, an impressive feat for a song accompanied by a home-made music video (complete with pantsless dancing) made from the confines of quarantine. 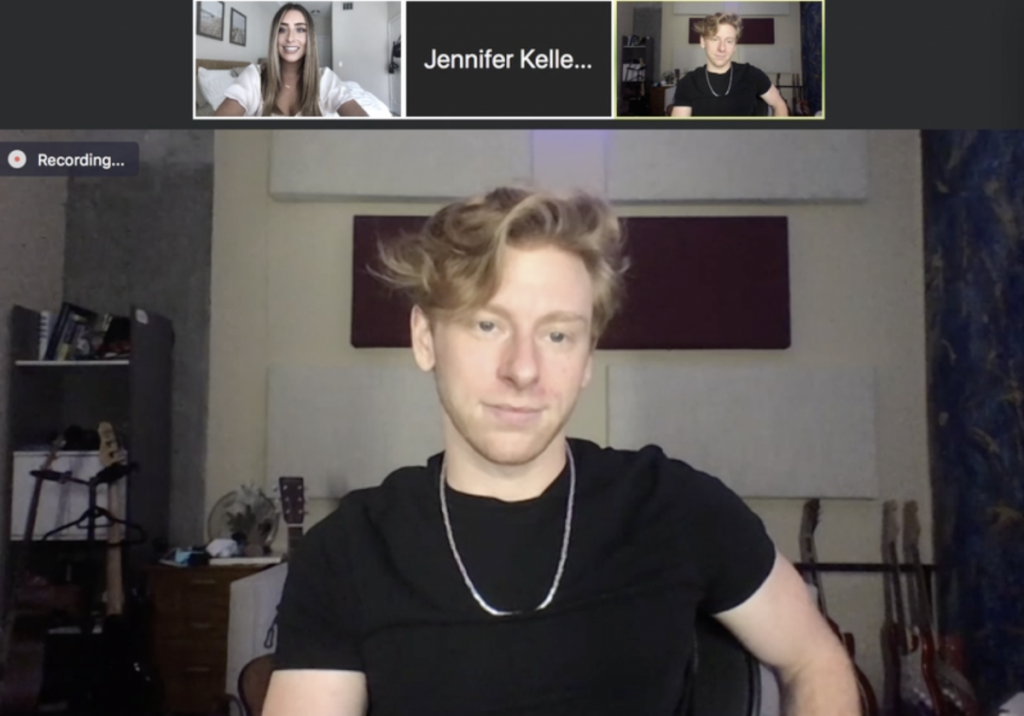 According to Brandon, he wanted to take a break from his typically sincere music style and display his true personality.

“My music is kind of meaningful…It is definitely heavy sometimes,” he said. “I’m really goofy and loud and off the walls and stuff. So, it was really nice to showcase that in this video.”

A master of the piano, drums and guitar, many might be shocked to know Brandon spent most of his life as an aspiring soccer player. In fact, he played for the University of Southern California until he suffered from an abrupt, career-ending injury.

“I was kind of lost for a year,” he recalled. “I’m a very passionate person and I didn’t have much to be passionate about.”

Luckily, he was able to find himself again in his music.

With muses like John Mayer and Coldplay, he found a niche in the industry shaped by his heroes.

“John Mayer is the reason I decided to follow music,” Brandon said through a smile.

A dream collaboration is difficult for Brandon to imagine. The artist said he strays away from those kind of thoughts, so as not to get distracted.

“My head will get too in the clouds fantasizing about that stuff. I feel like I have to get there first and then reassess,” he said.

Still, he admits he would not pass up an opportunity to collaborate with accomplished producer Ariel Rechtshaid, whose producing credits include Vampire Weekend, Usher and Madonna.

“There is a certain magic that happens behind the scenes that you won’t know about unless you were there,” Brandon admits.

The artist will be releasing a new song soon, titled “Live and Not Live.” It is a song he wrote over two years ago but believes is as relevant as ever.

“My message behind the song is…of course, it’s important to have your voice heard…but, instead of trying to make these giant sweeping changes in policy and government, the thing you can do now is treating the people on your left and right with kindness and respect.”

Miami in the NFL: Week 4
A very merry (and inclusive) Christmas, thanks to Lifetime