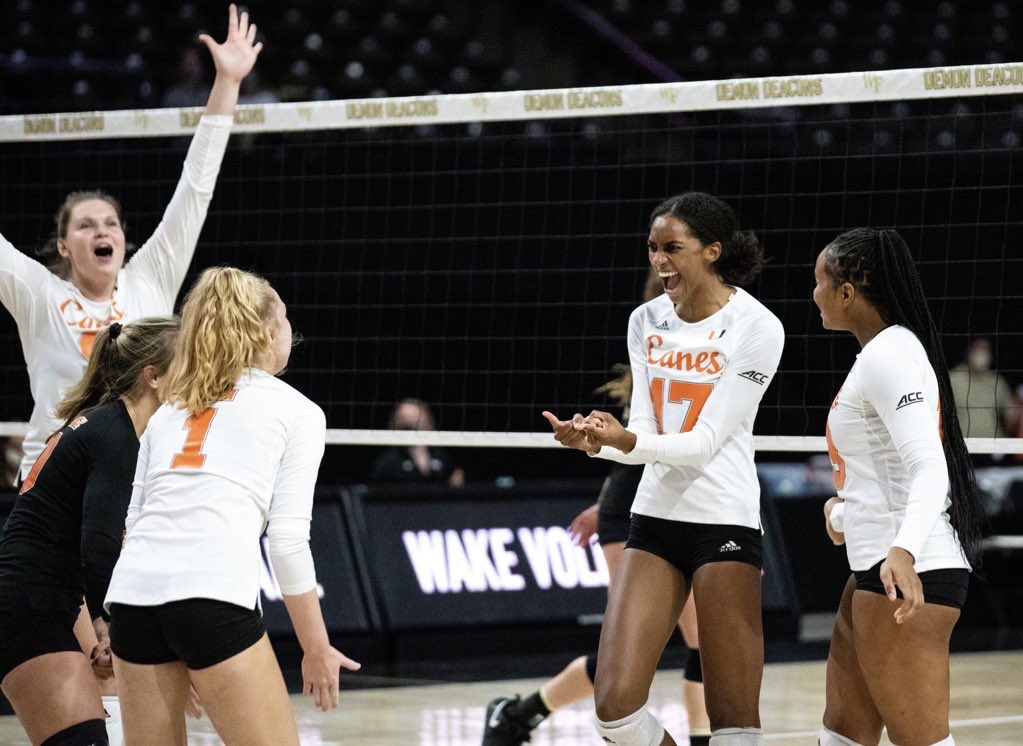 Coming off of two well-fought matches against the Georgia Tech Yellow Jackets last weekend to open their season, the Hurricanes continued their strong stretch of play with a two-game sweep of the Wake Forest Deacons on Oct. 2 and Oct. 3.

The Hurricanes won both matches in four sets and have now improved to a 3-1 overall record for the season.

The Hurricanes played a pair of close sets versus Wake Forest to open the match – winning 25-22 and losing 25-23 – before breaking away offensively to seal the victory.

In the first set, the Canes got off to a slow start on offense, exchanging points back and forth with the Deacons. With the score at 13-11 in Miami’s favor, the Hurricanes rallied for four unanswered points to extend their lead to six. While Wake Forest ultimately narrowed the deficit, Miami’s three aces and nine kills, led by Janice Leao’s five, proved to be the difference in the set’s outcome.

The Hurricanes got off to a hot start offensively in the second set, leading by as much as five, but the Deacons amped up on offense themselves to hit at a match-best .442 clip and snag a two-point victory to even the match at 1-1.

Throughout the third, the Canes and the Deacons exchanged points through much of the first half of the set, but as soon as the Hurricanes claimed the lead, they ran away with it. After taking an 8-7 lead, they never surrendered it. Miami claimed the final six points of the game to complete the victory by a score of 25-17. Freshman Lauren Tarnoff, who made her debut for Miami against Georgia Tech, recorded four kills on five attempts and star setter Savannah Vach tallied nine assists and six Hurricanes recorded at least one kill.

In the final set, the Hurricanes continued their offensive barrage on the Deacons, leading by as much as twelve despite their lead being narrowed to six in their 25-19 victory. Savannah Vach recorded her third double-double of the season with 39 total assists and 10 digs.

After a strong first outing versus the Wake Forest Deacons, the Hurricanes never relented in their rematch and emerged victorious once again in four sets.

The Deacons were resilient defensively in the first set, but Miami managed to edge out a 25-23 victory off an outstanding set from Janet Kalaniuvalu, who recorded five of her eight total kills in the match opener. To the Hurricanes’ credit, they also put forth a lockdown defensive display as six players registered blocks to hold back Wake Forest’s attacks.

In the second, the Canes were able to neutralize the Deacons defensively with an 11-point set victory. Freshman Angela Grieve led the way for Miami with six kills and a block, and a .034 attack percentage from Wake Forest crushed any hopes of a comeback in the set.

The Deacons, hoping to avoid the match sweep in the third set, held a five-point advantage late in the set versus the Hurricanes at 20-15, but Miami rallied back to even the score at 23-23. After a string of consecutive tied scores, Wake Forest eventually broke through and snagged a 28-26 victory.

However, the Deacons’ rally of desperation in the third was quickly dwindled in the fourth as the Canes jumped to a decisive 20-10 lead. On the set, Lukianova and Leao led the offense with four kills and Vach added seven assists to her line, giving her a total of 38 in the match as the ‘Canes took a 25-16 set win.

While Miami’s three early wins to start the season are impressive, they are also extremely significant for the direction of the team in the immediate future. As has been the case throughout much of the sports world in recent months, the coronavirus pandemic has forced sports leagues and organizations to alter their schedules and devise unprecedented approaches to continue athletic activities.

For the Hurricanes, their season consists of eight games strictly versus conference opponents in the ACC. Halfway through the season, the results have been encouraging. The Hurricanes held a 6-12 record last season versus ACC opponents and – while the sample size is far smaller – their 3-1 record is a sign of promise for a team blooming with young talent.

By taking both of last weekend’s matches versus Georgia Tech to five sets, emerging with a victory and sweeping Wake Forest, the Hurricanes are establishing themselves as a legitimate threat in the ACC as Clemson and Florida State await them on the court for the final four games of the season.

With the match win, the Hurricanes now hold a 22-6 all-time record versus Wake Forest and solidified themselves as a potent team in the ACC. The team will now travel to Clemson, South Carolina to take on the Tigers in their final road matches of the season on Oct. 8 and Oct. 9.