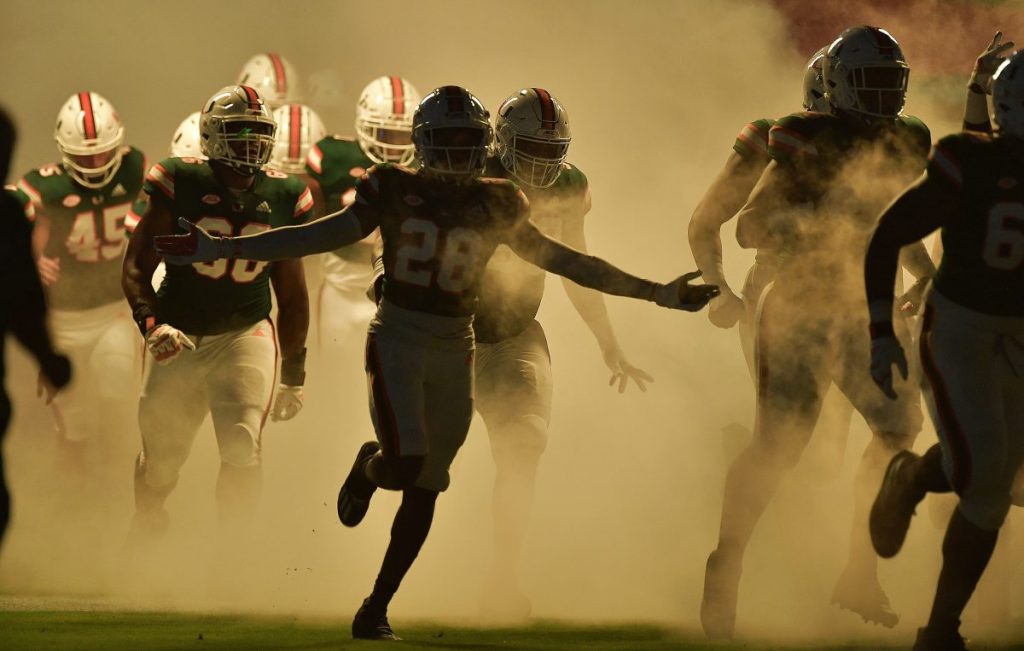 There is no better time to be a Miami sports fan than right now.

The Miami Heat are playing the Los Angeles Lakers in the NBA Finals, the Miami Marlins miraculously made the postseason for the first time since 2003, and the Miami Hurricanes football team is ranked No. 8 in the AP Top 25 poll.

After a 52-10 win over Florida State last Saturday — one of the most lopsided victories between Miami and Florida State in the history of the rivalry — the Hurricanes claim their highest ranking since preseason of 2018, where they were ranked No. 8 heading into the season.

But in the next two weeks, the Hurricanes will face two of the biggest challenges this season thus far: a bye week and Clemson.

Challenges of a bye week

This year adds another wrinkle into the difficulty of a bye week because of Covid-19. With more down time this week, head coach Manny Diaz’s main priority is keeping his players safe from the virus.

“We are going to face our most difficult opponent, and that’s not Clemson, it’s going to be this off week,” Diaz said. “Making sure that everyone makes great decisions, you lose a little bit of the structure and routine of a game week. We’ll give them a couple off days. Really focused on being smart this bye week and giving us a chance to play a team that we got a lot of respect for.”

Redshirt senior quarterback D’Eriq King had a similar message to share after the Florida State game.

“Well, we got to be safe on coronavirus,” King said. “That’s the biggest thing for us. We’ve got an off week. Probably got a couple off-days, so everybody’s got to be smart.

Florida governor Ron DeSantis has lifted almost all Covid-19 restrictions, including restaurants and bars. According to CNN, cases in Florida spiked from 738 on Monday to 3,266 on Tuesday.

“There will be a little bit more idle time and not to mention by the way if you look at where the state’s going, the numbers are going down, but we are easing restrictions, and no one really knows how that’s going to go,” Diaz said. “It comes down to trust and I trust our guys to do right and to protect the team.”

Clemson will be a big test

The other challenge, of course, is the No. 1 ranked Clemson Tigers, who Miami will face on Oct. 10 in Death Valley. The Tigers have the undisputed best quarterback in college football in Trevor Lawrence and have made the college football national championship game in four out of the last five years. Clemson also has a recent history of beating up on the Miami Hurricanes.

The 2017 ACC Championship was the last time the two teams played. Clemson won 38-3 and held Miami to just 214 total yards of offense. The Tigers handed Miami its worst loss ever with a 58-0 win in 2015, the last time they played each other in the regular season.

“They’ve earned the right to be where they are right now, and they’ve earned it by getting themselves into these kinds of games and losing them and learning from it and passing that knowledge down from class to class,” Diaz said of Clemson.

One of the biggest advantages that came out of Miami’s dominating performance over Florida State last weekend was that coaches were able to rotate freshmen into the game.

“This class has something to it,” Diaz said. “I feel like I’ve been saying that. You want it to be true when the games come, but it’s turning out to be true. They want to work; they want to be great.”

Restrepo also spoke to the media about his jersey number, which he changed from 80 to 7 just before the start of the season to honor his former Deerfield Beach High School teammate Bryce Gowdy, who died in December.

“I took that into consideration and took it as motivation and just worked my tail off, and Coach Diaz blessed me with having the opportunity to represent my brother up in heaven. It’s just a true blessing,” Restrepo said. “I told coach Diaz I’m not going to let him down because it’s a true blessing to represent one of my fallen soldiers.”

In addition to the 8-yard punt return, Restrepo also recorded a tackle on special teams during the Florida State game.

For the second-straight week, King was named the ACC Quarterback of the Week. The redshirt senior finished the game 29-for-40 for 267 yards and had two touchdowns. He also had a game-high 65 rushing yards.

Miami’s offense has flourished with King running point and taking direction from offensive coordinator Rhett Lashlee, but facing Clemson’s defense will no doubt be the tallest task the offense will have.