Home » With most points ever scored against Florida State, Miami dominates 52-10 in rivalry game

With most points ever scored against Florida State, Miami dominates 52-10 in rivalry game 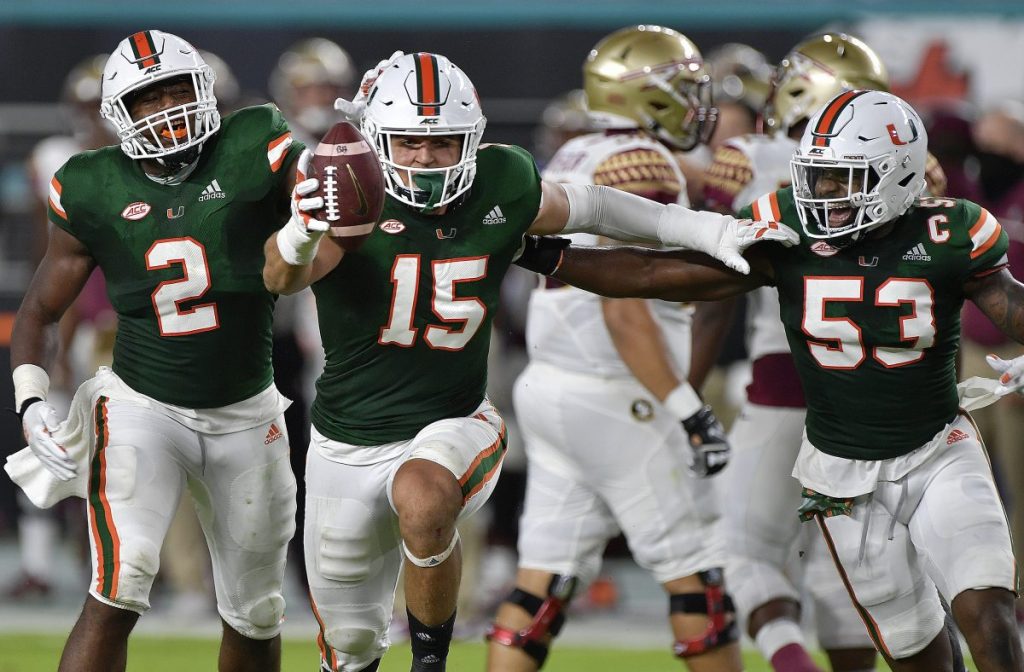 Defensive end Jaelan Phillips (15) celebrates after intercepting a pass during the first half of the Miami vs Florida State game at Hard Rock Stadium on Saturday, Sept. 26. Photo credit: Michael Laughlin/ACC

In front of a “sold out” crowd of 12,806 fans, the Hurricanes scored on the opening drive of Saturday night’s game at Hard Rock Stadium and did not look back.

“They were worthy victors tonight,” head coach Manny Diaz said of his team. “I thought the key of the game was our possession downs. Talk about being relentless on offense. Those third down plays, I really thought in the first half, that was the key to our victory.”

And despite the 317 passing yards, it was Miami’s running backs who pounded the scoreboard.

“It’s a great win. It’s a great feeling,” King said. “At halftime we didn’t come in and celebrate. I think we took a big step in being a mature football team.”

Aside from the two opening touchdowns by FSU in the first and third quarter, Miami’s defense dominated. With three interceptions by three different players, the Turnover Chain was brought out three times. Defensive end Jaelan Phillips was the first to wear the chain after intercepting Jordan Travis, cornerback Al Blades Jr picked off James Blackman in the third quarter and Bubba Bolden intercepted freshman quarterback Tate Rodemaker’s pass in the fourth quarter.

Six different Hurricanes recorded a sack and as a team Miami finished with 13 tackles for losses.

“Dominated up front and we need more of that,” redshirt senior defensive end Quincy Roche said. “I’m proud of these guys. We kept our poise and didn’t get flustered.”

But the defense did have some questionable plays. Phillips was disqualified from the game in the second quarter after receiving two unsportsmanlike conduct penalties. And cornerback Gurvan Hall was ejected from the game for targeting in the third quarter. Hall will miss the first half of Miami’s game against Clemson in two weeks as a result of the penalty.

“He felt awful about it,” Diaz said of Phillips. “I think it’s a great teaching lesson. Full credit to Cam Williams, Jahfari Harvey..it gave some other guys a chance to step up.”

For the first half of the game, the Hurricanes were an offensive machine. They totaled five touchdowns, a field goal and 333 yards of offense in the first two quarters alone.

King started the game with a 24-yard strike to tight end Brevin Jordan. Then running back Cam’Ron Harris scored two consecutive rushing touchdowns on back to back drives.

After a bizarre series of plays where Mark Pope fumbled a punt return and Jaelan Phillips intercepted FSU a play later, Dee Wiggins scored on a 40-yard pass from King.

The last score of the first half came from Chaney, who scored his first touchdown of his UM career on a two-yard run. After watching fellow freshman Jaylan Knighton score his first two touchdowns last week against Louisville, Chaney had to get in on the action and score touchdowns of his own. The South Florida native finished with 35 rushing yards on seven carries.

Florida State came out hot to start the second half. Tight end Camren McDonald scored on a 12-yard pass from James Blackman at the end of a 12 play, 79-yard drive. But the Seminoles were held scoreless for the remainder of the game.

After Chaney’s second touchdown, freshman Michael Redding III caught a seven-yard touchdown pass from N’Kosi Perry, who replaced King at quarterback in the fourth quarter. The touchdown by Redding III was the first of his career as a Hurricane.

The Hurricanes will now have a week off before they head to Clemson, South Carolina to take on the No. 1 ranked Clemson Tigers (2-0, 1-0).

“We’re really focused on being smart this bye week and continuing to protect this program to play a team that we have a lot of respect for,” Diaz said.