Home » Expect the unexpected for rivalry matchup with Florida State

Expect the unexpected for rivalry matchup with Florida State 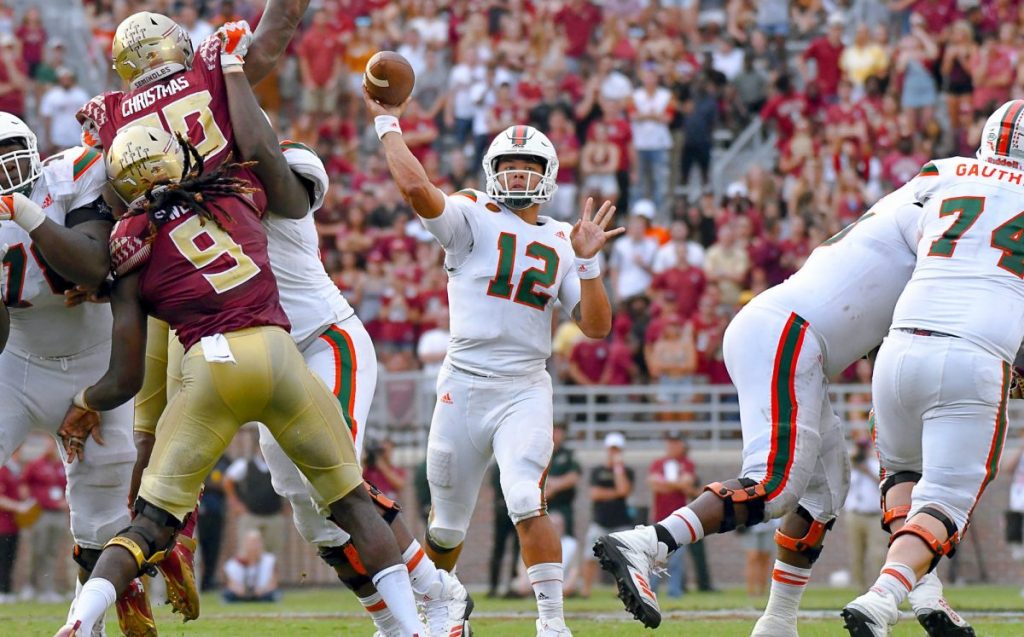 It’s here. The game University of Miami fans wait all year for. The highly anticipated rivalry will be renewed. UM vs Florida State.

Except this year, everything is different.

No students will be allowed to pack Hard Rock Stadium and yell obscenities at Florida State. Only 13,000 fans will be at the game. The Seminoles will be without their head coach Mike Norvell, who tested positive for Covid-19 last week. Miami (2-0, 1-0 ACC) is ranked No. 12 in the country. And Florida State (0-1, 0-1 ACC) looks like they will have a hard time winning many games this season.

But, when it comes to the longstanding rivalry between the two Florida teams, it’s usually better to expect the unexpected because the history between Florida State and Miami is just about as crazy as it gets.

To briefly summarize some of the situations that have occurred between the two teams:

The 11-point-favored Hurricanes have won the past three games against the Seminoles and they will look to continue that streak Saturday night at Hard Rock Stadium.

“I know they’re going to be ready,” Miami quarterback D’Eriq King said. “I know we’re going to be ready. It’s still one of the biggest games of the year for us every single year. As soon as we get the schedule, everybody looks at the Florida State game.”

The Seminoles are struggling with the same issues that have plagued the team for the past couple of years. Last year, Miami defeated Florida State 27-10 and Willie Taggart was fired the next day. The ‘Noles have only played one game this year and they lost 16-13 to a below average Georgia Tech team at home.

The biggest struggle for Florida State this year, as in the past few years, is the offensive line. The line has three underclassmen and a number of linemen are dealing with injuries. They allowed three sacks to quarterback James Blackman against Georgia Tech. Miami’s front seven will be out for blood when they take the field, so expect the defense to try and exploit FSU’s weakness at the offensive line.

Florida State is led by quarterback James Blackman, a junior who made 10 starts last season, but the star of the offense is wide receiver Tamorrion Terry. Standing at 6-foot-4, Terry is widely regarded as one of the top receivers that will be available in the 2021 NFL Draft. Defensively, the Seminoles do have some highly touted players in defensive tackle Marvin Wilson and cornerback Asante Samuel Jr., who had two interceptions against Georgia Tech.

For Miami, the offense will look to build off last week’s explosive 47-point scoring output against Louisville. After his performance against Louisville, quarterback D’Eriq King was awarded with ACC Quarterback of the Week, Earl Campbell Award Player of the Week, Manning Award Star of the Week and Davey O’Brien Week 3 Great 8. King has thrown five touchdowns and has no interceptions in 54 pass attempts. Running back Cam’Ron Harris leads the ACC in rushing through two games.

Although the stadium won’t be packed and there won’t be any tailgaters, the rivalry will go on.