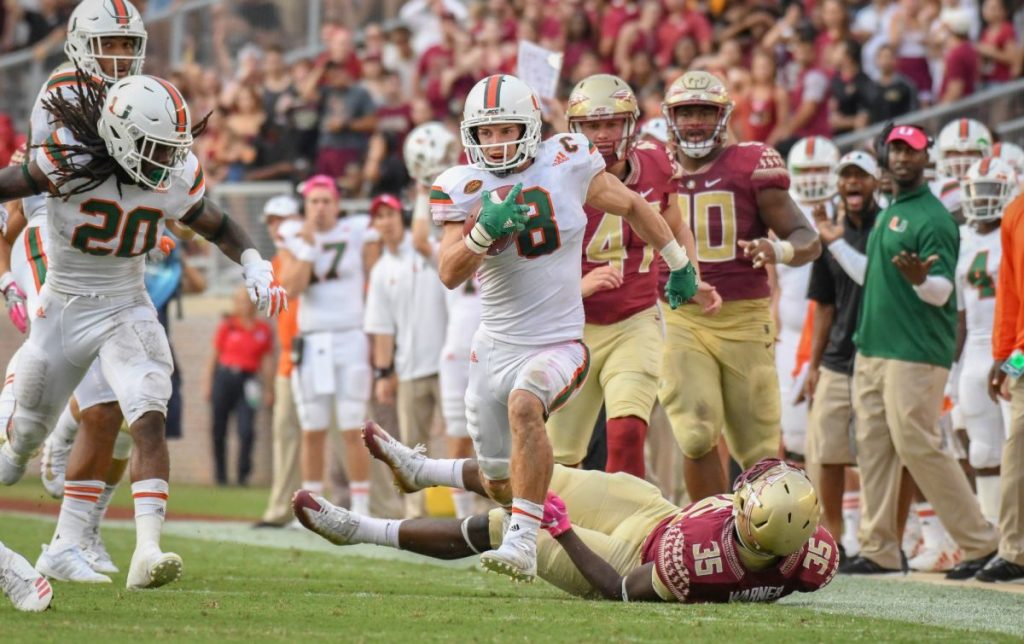 Florida State is 0-1 headed into the rivalry matchup with the Miami Hurricanes this weekend. The Seminoles will be without head coach Mike Norvell, who tested positive for Covid-19. But, when it comes to the UM-FSU rivalry, it’s always better to expect the unexpected. To get a deeper look at this year’s Florida State team, the Miami Hurricane spoke to the FSView & Florida Flambeau deputy sports editor Chase Nevitt.

TMH: Who is the most dangerous player on offense and on defense?

CN: Tamorrion Terry is easily the most dangerous player for the ’Noles on offense. Terry is projected to be Florida State’s first wide receiver selected in the opening round of the NFL draft since Kelvin Benjamin in 2013. At 6-foot-4, one might think that Terry is a traditional “go up and get it” type receiver like the Tampa Bay Buccaneers’ Mike Evans. However, Terry is most dangerous as a deep threat. Last season, Terry led the nation in 60+ yard catches. Marvin Wilson is the ’Noles’ most important player on defense. Wilson had a lackluster game against Georgia Tech two weeks ago, so I would look for the projected top 15 NFL draft pick to step it up against Miami on Saturday.

TMH: How different and/or difficult will it be for the players and coaching staff to not have Mike Norvell on the sidelines?

This is a very loaded question, and I honestly do not have a concrete answer. This is something that we really have never seen in college football. With that being said, I do think it will have an impact on the players. In an in-game situation, it is important for players to see their head coach leading the team as a whole. Without his presence, I could see the team losing their composure early if Miami is able to make a statement in the first quarter.

TMH: What is the vibe on campus in regards to this year’s team?

CN: Before the Georgia Tech game, I would say everyone was cautiously optimistic. After the lackluster performance against the Yellow Jackets, however, I feel like most students have gotten back into the same mindset of expecting the ’Noles to lose against any decent opponent. FSU fans continue to see the same type of mistakes and issues that have plagued this team over the past few years, specifically speaking about the team’s poor offensive line play and undisciplined nature on both sides of the ball.

TMH: Who has stepped up at running back without Cam Akers?

CN: Against Georgia Tech, FSU running backs struggled mightily to gain yards consistently. Texas A&M transfer Jashaun Corbin was projected to see most of the carries for FSU, but he only had six rushing attempts against GT. Corbin’s impact came much more on the receiving end out of the backfield as he made a team high eight catches which was good for 55 yards. Sophomore La’Damian Webb saw the bulk of the carries for the ’Noles as he rushed for 39 yards on 13 attempts. Obviously, these are some abysmal numbers, and FSU is definitely missing Akers’ presence. These poor numbers can mostly be chalked up to FSU’s offensive line play, but I would still look for the ’Noles to attempt to run the ball a bit more against Miami.

Kickoff is set for 7:30 p.m. Saturday at Hard Rock Stadium. The game will be broadcast on ABC.

Follow Up: Open Sesame
Expect the unexpected for rivalry matchup with Florida State